Companies operating in the current market landscape are expected to primarily focus on the quality of their products, production technologies, pricing strategies, and sales to improve their market position. Although the cost of graphite electrodes accounts for around 1% to 5% of the overall production cost of steel, it is an important material in the EAF steel production. Furthermore, as graphite electrodes are one of the very few products that exhibit high levels of electrical conductivity and the ability to withstand high temperatures during steel production, the demand for the same is on the rise. At the back of these factors, the U.S. graphite electrodes market is set to attain a market value of ~US$ 1 Bn by the end of 2027.

In October 2019, Hexagon Resources Limited revealed that the company had successfully completed tests that were predominantly aimed at improving the overall service life of graphite electrodes. The demand for graphite electrodes is set to grow at a steady rate due to its high thermal shock resistance. Companies in the U.S. graphite electrodes market are also expected to lower downtime, minimize carbon footprint, and manufacture cost-effective products. Companies may also offer customized products to their customers and focus on their pricing strategies to gain an edge in the current market landscape. 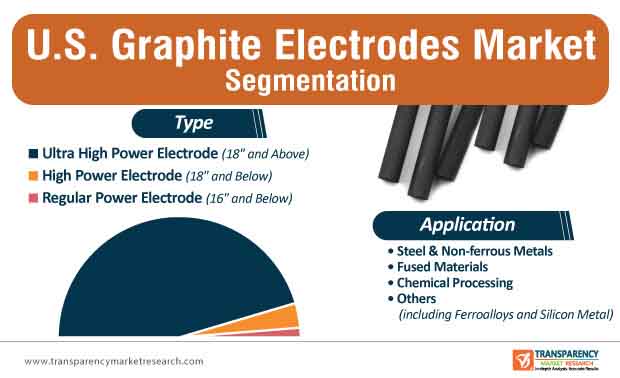 The report mentions the company profiles of key players that are currently dominating the graphite electrode market in the U.S., wherein various development, expansion, and winning strategies practiced and executed by leading players have been presented in detail.

The report provides detailed information about the graphite electrode market in the U.S. on the basis of comprehensive research on various factors that are playing a key role in accelerating the growth potential of the market. Information mentioned in the report answers path-breaking questions for companies that are currently functioning in the market and are looking for innovative ways to create a unique benchmark in the graphite electrode industry in the U.S., so as to help them make successful strategies and take target-driven decisions.

The research methodology adopted by analysts for combining the graphite electrode market report is based on detailed primary as well as secondary research. With the help of in-depth insights of the industry-affiliated information that is obtained and legitimated by market-admissible resources, analysts have offered riveting observations and authentic forecasts of the graphite electrodes market in the U.S.

During the primary research phase, analysts interviewed industry stakeholders, investors, brand managers, vice presidents, and sales and marketing managers. Based on data obtained through the interviews of genuine resources, analysts have emphasized the changing scenario of the graphite electrodes market in the U.S.