The lithium-ion battery market will grow over 2x between 2017 and 2027 – where will this spurt in growth come from? Unsurprisingly, consumer electronics will be at the forefront; however, it will witness massive uptake by the automobile industry that will catalyze revenue streams. As EV penetration grows rapidly, and the automotive industry looks to reduce its dependence on fossils, lithium-ion battery manufacturers will unlock access to opportunities that were unthinkable of a decade ago.

Growth will also be complemented by the growing focus on renewables. As government and private initiatives on harnessing solar and wind energy gain traction, the lithium-ion industry will play a central role. However, amidst the euphoria in the industry, the traditional challenges associated with supply/demand are also likely to crop up. Also, while a majority of the lithium-ion batteries manufactured currently satisfy the 'cycle stability' parameter, creating next-gen batteries that do not falter in terms of 'overall age' remains a challenge. Overall, these are exciting times to be in the lithium-ion battery landscape, as the highly-touted EV revolution grows stronger by the day. 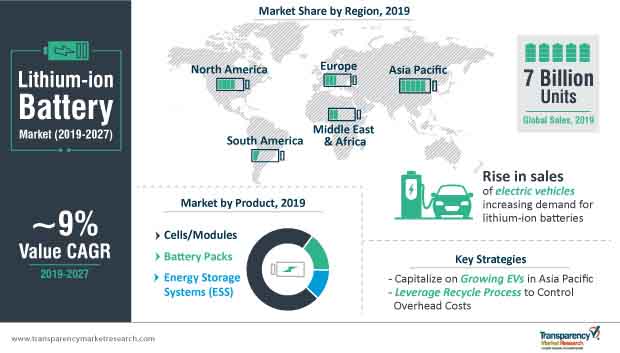 The lithium-ion battery market does encounter a deadlock when it comes to environmental sustainability. With the exponentially rising need to integrate lithium-ion batteries in EVs, serious disposal concerns and their detrimental effects on the environment have inspired automakers to give a second thought to adopting them.

With polymer separators and plastic cases being used to manufacture lithium-ion batteries, the shift to electric energy from fossil-based energy for EVs makes no difference. This challenged manufacturers to rethink their product. However, innovation in the technological range engendered the recycling of lithium-ion batteries, which is likely to become a trend of the industry. With automation meeting recycling processes, the separation of different components have been easier, and, in that perspective, manufacturers can capitalize on the reduced overhead costs with low raw material requirements.

Since the reserves of lithium are highly concentrated in Chile, China, Argentina, and Australia, dependence on mining will reduce as industries optimize recycled materials and attribute a second-life to the batteries.

Lithium-ion batteries feature high energy density, high discharge power, and low impact of time, which facilitates a remarkable advance in the growing application to EVs. Besides, increasing government spending plays a crucial role in fueling the adoption of electric vehicles. Leading regions in electric mobility leverage varied measures such as fuel economy standards and incentives for zero or low emission vehicles, which serve as economic instruments for the adoption of electric vehicles.

Though the growth of the lithium-ion battery market is significantly stimulated by the governments of numerous countries, the private sector will follow the lead and push the bars of the industry. Volkswagen, a German automaker, announced its vision to electrify all its car models by the year 2030. Chinese automakers - Yutong and BYD - are actively involved in deploying electric bus in Latin America and Europe. For example, in June 2019, BYD Co. Ltd announced the deployment of 183 units of Pure Electric Buses to Chile.

With electric vehicles becoming the benchmark for the automotive industry, automakers following the traditional suit of fossil-based vehicles are seen entering into partnerships with lithium-ion battery manufacturers. For instance, in June 2019, LG Chem Ltd. formed a joint venture with Geely Automobile Holdings Ltd. for manufacturing lithium-ion batteries for EVs in China. Production of lithium-ion batteries is expected to begin in 2021, with 10 GWH of annual capacity.

In November 2018, the German government announced support worth US$ 1.12 billion for bringing in innovation into lithium-ion manufacturing firms. With an innovative-driven approach and established automotive players, Germany is likely to remain an attractive region as far as investment is concerned. 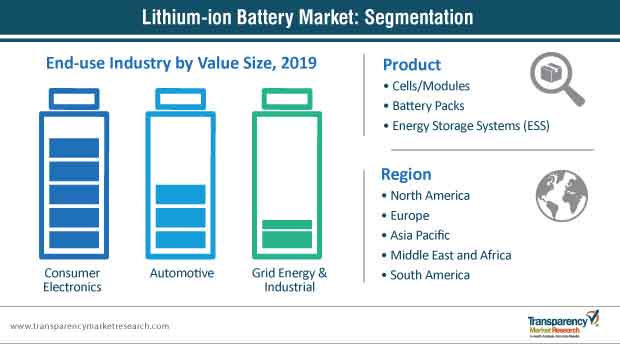 What Does it Mean for Market Players?

Chemical companies tend to look at the consumer electronics sector as a lucrative segment, given the supply of raw materials to cell manufacturers aimed at developing batteries for gadgets and devices. An entirely new market opportunity requires a commercial strategy as to how much investment is safe to make in EVs. In addition, frequent amendments in the specifications of EVs also put the confidence of chemical companies at test. However, partnering with lithium-ion battery manufacturers will make it easier for chemical companies to supply raw materials on a demand basis.

As applications of lithium-ion batteries move into a new dimension, battery manufacturers have both, pressure and opportunity on the horizon. With drastic improvements in the demand for lithium-ion batteries ascending from the automotive sector, manufacturers need to prioritize their investments and production facilities as per the RoI potential of the region that they are operating in. Since leading battery manufacturers take a cost competitive and innovation-driven approach, product diversification can be a good bet.

The automotive industry has been undergoing a seismic shift, with electricity being the new default fuel. This has inspired automakers to redefine their business models based on current and future sustainability implications. With a high pick in the number of EV manufacturers, stiff competition can be tackled only by standing out in the market, which will shift focus towards the 'comfort' and 'aesthetics' of electric cars. To achieve this, automakers will seek customized auto parts, which can be achieved through backward integration, acquisition of a battery manufacturer, or a joint collaboration.

The increasing presence of gas detector manufacturers and growing distribution networks across the world are anticipated to offer lucrative opportunities during the forecast period. Some of the major players in the lithium-ion battery market include

The research undertaken by our seasoned analysts follows a robust research approach, consisting of both, primary and secondary research methodology. In order to conduct primary research, interviews and discussions were undertaken with industry experts, key opinion leaders, vendors, and distributors. This aids in analyzing the demand-supply gap prevailing in the lithium-ion battery market.

For carrying out secondary research, marketing collaterals, company websites, industry associations, and government statistics were referred to. Insights obtained through primary and secondary research are then validated with the data triangulation method.

With a view to provide a microscopic as well as a macroscopic view of the lithium-ion battery market, authors of the research report have bifurcated the market on the basis of product, end-user industry, and region. The research report also studies the incremental opportunity on the basis of market segmentation. Key segments of the lithium-ion battery market are as mentioned below: