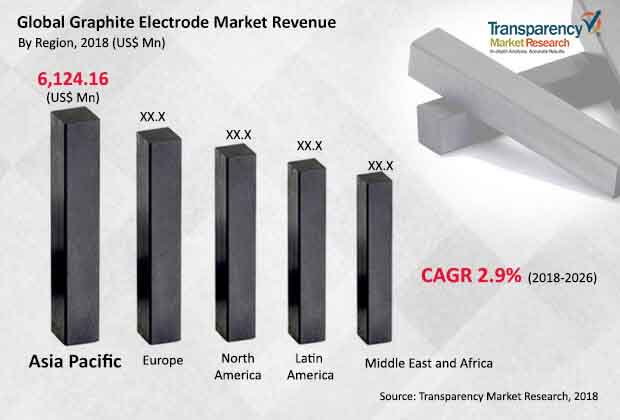 Major players in the graphite electrode market have adopted mergers and acquisitions as their key strategy to expand their network and share their investments. For instance, in 2017, Tokai Carbon Co., Ltd. acquired SGL GE’s U.S. business to set up a manufacturing base in North America, thereby increasing the company's presence in a prominent region of the EAF market. The deal is expected to help Tokai build a solid business base as a global competitor, supported by a tri regional structure consisting of bases in Asia, Europe, and North America. When there was oversupply of graphite electrode in the market, Tokai Carbon cut production capacity by 40% to streamline the carbon ceramics segment. However, it hampered the company’s competitiveness in the graphite electrode market. Acquisition of SGL’s U.S. business helped the company increase presence and competitiveness.  Approximately six months’ time is required for the production of graphite electrodes. Raw material prices are highly volatile. Hence, contracts with major steel producers with EAF steel manufacturing facilities reduces the risk posed by volatile and uncertain market conditions. Availability of raw material is the main concern for graphite electrode manufacturers. Companies are including the clause of needle coke price adjustment in the contracts for graphite electrode prices.

The ultra-high power segment accounted for a major share of the graphite electrodes market in 2017. It is expected to remain the dominant segment during the forecast period. Steel & non-ferrous metal and fused materials were the key application segments of the graphite electrodes market in 2017 and are expected to dominate market during the forecast period.

The report comprises a detailed value chain analysis, which provides a comprehensive view of the global graphite electrodes market. The Porter’s Five Forces model for the graphite electrodes market has also been included to help understand the competitive landscape in the market. The study encompasses market attractiveness analysis, wherein applications are benchmarked based on their market size, growth rate, and general attractiveness.

The Graphite Electrodes Market has been segmented as follows –