Set-top box is a device, which converts television set as user interface to the internet. Also, it allows TV to receive and decode digital television (DTV) broadcasts. At present, STB is becoming an integral part of TV across the globe.

Over the top (OTT) services enables consumers to view content of their choice without paying extra charge. This is one of the key factors likely to fuel growth of set-top boxes market in the foreseeable future.

Introduction of smart TVs, HD and ultra HD channels, and technological innovations are, conjointly, proliferating the adoption rate of set-top boxes. Digital video recording is one of the key features steering growth of the market. The feature allows to record the show and watch it later, as per the convenience of the consumers.

Availability of TVs integrated with Set-top boxes is one of the major trends creating momentum in the market growth. These TVs provide provision of accessing online video streaming platforms and social media. In addition, it provides option of better storage with capacity up to 2TB.

Further, government bodies in some regions are regulating digitization of cable networks. The trend is particularly observed in emerging economies such as India and China.

Combining all the above drivers, along with other influential factors such as the restraint due to OTT service providers and the opportunities that HEVC decoders can provide to set-top boxes, its global market is expected to progress at a CAGR of 6.4% from 2015 to 2022. This market is expected to be valued at US$16.6 bn in 2016 and US$24 bn by 2022. 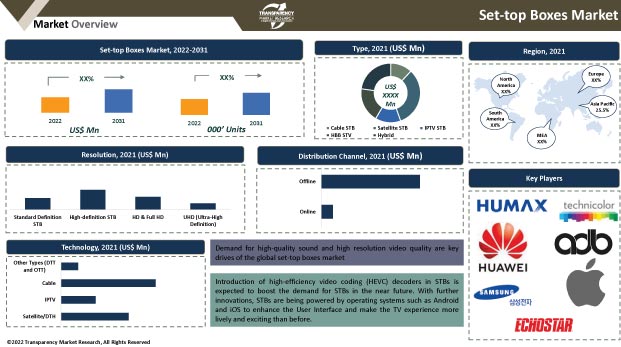 The rapid rates of industrialization in most Asia Pacific countries is allowing users to possess stronger purchasing capabilities, providing a wide array of regional opportunities for set-top box companies to grow. Additionally, the growth of the IT industry is helping create a better internet services infrastructure which can allow users to stream videos on demand at affordable prices. Coupled with the high population density, Asia Pacific can be a highly lucrative avenues for set-top box players in the near future.

Australia, China, and India already hold a massive base of internet users. The growing use of improved internet services along with the proliferation of smart TVs and IPTVs in this region will allow Asia Pacific to show the fastest growth rate in set-top box demand in the near future.

The proliferation of HD services has been highly successful in developed economies so far, with the release of a wide choice of HD TVs and HD channels. This makes it easier for a lot of set-top box providers to access these regions. As for the emerging economies from Asia Pacific, Latin America, and the Middle East and Africa, the demand for HD viewing services is rapidly on the rise. The resultant spread of HD services across these regions and the standardization of broadcasting services has created much more favorable grounds for set-top box providers to focus on.

Additionally, the imminent commercialization of the HEVC standard for set-top boxes is expected to negate the biggest issues that services providers have with 4K video data transmission: data decoding. The HEVC-enables set-top boxes are expected to enhance the speed at which 4K video can get decoded, thereby enabling a smoother 4K experience for users in a market where the demand for it is very high.

A set-top box (STB) is a device that is used to convert the video content transmitted from a pay TV operator to a format compatible with an end-user or subscriber TV. STBs may receive the video content from satellite, terrestrial, cable or Internet-based transmission. STBs offer a greater number of channels compared to conventional broadcasting services and further improve the quality of the video content considerably. The introduction of high definition (HD) channels, digitization of TV broadcasting and demand for higher picture quality are resulting in the growth of STB market. With advancements in technology, STB is increasingly being used to stream digital TV content through the Internet, further enabling a user to surf the Web, stream videos, access various applications, play games, and use allied features, such as OTT services. With advanced coding and compression techniques it has become much easier to decode high-quality videos using comparatively less bandwidth. The introduction of high-efficiency video coding (HEVC) decoders in STBs is expected to boost the demand for the latter in coming years. With the inclusion of further innovations, STBs are being powered by operating systems such as Android and iOS to enhance the user interface and make the TV experience more lively and exciting than before.

The report also segments the STB market based on product type into cable STBs, satellite STBs, IPTV STBs, and Hybrid Broadcast Broadband (HBB) or hybrid STBs. Segmentation based on video quality is into standard definition (SD) and high definition (HD). Furthermore, the report analyzes the factors that drive and restrain the growth of the STB market. The report also discusses the prevailing market trends, prospective growth opportunities, and major strategies increasing the popularity of STB. It also provides the market estimates and forecasts for all the segments in terms of revenue. Also provided is the market share of key players in the global STB market.

The global set-top boxes market is segmented as below: