The growing need across the world to efficiently manage hemostasis and tissue sealing while performing surgery has had a great influence on the evolution of modern surgical procedures. A group of agents identified as surgical tissue adhesives has been extended to promote hemostasis and tissue sealing throughout surgery, and these comprise both natural and synthetic agents. Fibrin sealants are the most efficient tissue adhesives currently available in the market. They are biocompatible and biodegradable. The fibrin sealants are composed of refined, virus-inactivated human fibrinogen, human thrombin, and sometimes added elements, such as virus-inactivated human factor XIII and bovine aprotinin. These agents imitate the final steps of the physiological clotting cascade to create a fibrin clot. The increasing use of fibrin sealants in the healthcare industry is anticipated to fuel the global fibrin sealants market during the forecast period. 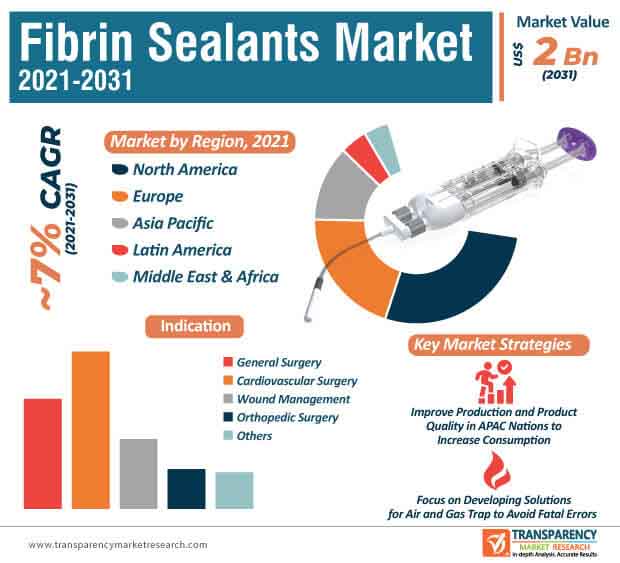 The global COVID-19 pandemic has had a significant impact on almost every industry, including the fibrin sealants market. Most of the healthcare industry shifted its focus on fighting the coronavirus outbreak, while various surgeries and diagnostic treatments were postponed, canceled, or performed in a limited amount. Surgeries performed with fibrin sealants, hemostats, or adhesion barriers have declined significantly across the world, thus hampering the growth rate of the fibrin sealants market. Businesses witnessed reduced demand for sealants with a decreasing number of surgeries. Many patients avoided operating in contagious environments fearing severe consequences. The healthcare industry suffered due to limited resources and restrictions on the global trade. Thus, it affected the growth of the fibrin sealants market.

Major market players are currently focusing on developments and innovations in the ways to conduct practices using DTC and remote operations. With the growing number of coronary artery disease across the world, the fibrin sealants market is expected to witness demand post-COVID-19. The number of these cases is anticipated to rise with the growing population and insufficient healthcare in underdeveloped countries. As the pandemic is nearing its end, companies are preparing to expand their business activities and productivity to flatten the demand curve. This might prove propitious for the global fibrin sealants market during the projected period.

Fibrin sealants are presently used in several surgical practices, including cardiovascular surgery, thoracic surgery, neurosurgery, plastic & reconstructive surgery, and dental surgery. The use of fibrin sealants has a resolute effect on surgical outcomes, such as improved time to hemostasis, decreased blood loss, and reduced complexities. The report describes the evolution of fibrin sealants, the composition of currently available products, and their use in surgical practice. Many electrosurgical instruments are available, and used for analysis and sealing vascular structures. The topical hemostatic agents, such as fibrin sealants, are used to control bleeding from surfaces or cavities that are not responsive to suturing, electrosurgery, or other functional instruments including the argon plasma coagulator. An increment in the number of surgical procedures and patients with blood-related disorders such as hemophilia is anticipated to boost the global fibrin sealants market in the upcoming future.

There is a surge in awareness about medical treatments. Combined with the rising literacy rate, there has been an increase in the adoption of new efficient surgical products, which is likely to fuel the demand in the global market. Moreover, the involvement of governments and organizations to promote information regarding chronic diseases and treatments will raise the number of patients in the upcoming future. Owing to the increasing aging population in North America, the region is expected to a hold major share of the global fibrin sealants market. The global fibrin sealants market is expected to expand at a CAGR of ~7% from 2021 to 2031. 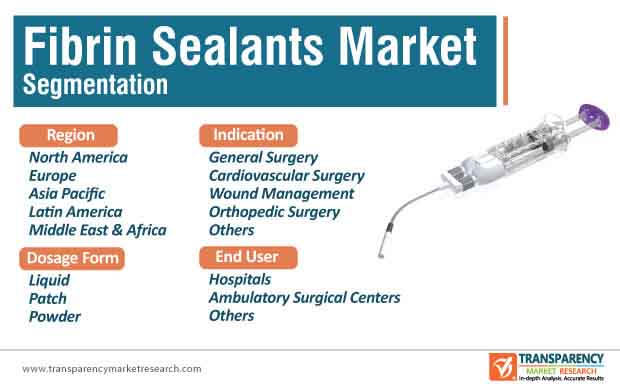 Stuck in a neck-to-neck competition with other brands? Request a custom report on Fibrin Sealants Market

The global fibrin sealant market is principally driven by the increasing predominance of important surgeries and traumatic injuries. Recent improvements in technology and products have resulted in the development of biocompatible sealants, which reduce complexities and support the normal movement of tissues without any restraint on the functioning of the organs. Furthermore, North America accounted for the highest revenue share of the fibrin sealants market in 2019 and is expected to lead the regional segment during the forecast period. Advancements in hemostasis technology and rising number of chronic diseases are likely to aid in the future growth of the fibrin sealants market.

The report includes an elaborate executive summary, along with a snapshot of the growth behavior of various segments in the scope of the study. Moreover, the report sheds light on the changing competitive dynamics in the fibrin sealants market. These indices serve as valuable tools for existing market players as well as for entities interested in participating in the fibrin sealants market.

The comprehensive report on the global fibrin sealants market begins with an overview of the market, followed by the scope and objectives of this study. Following this, the report provides detailed explanation of the objectives behind this study and healthcare compliances laid down by accredited agencies in the purview of line of procedure for fibrin sealants.

For reading comprehensibility, the report has been compiled in a chapter-wise layout, with each section further divided into smaller ones. The entire report comprises an exhaustive collection of graphs and tables that are appropriately interspersed in the entire compilation. Pictorial representation of actual and projected values of key segments is visually appealing to readers. This also allows comparison of the market shares of key segments in the past and at the end of the forecast period.

The report analyzes the global fibrin sealants market in terms of dosage form, indication, end user, and region. Key segments under each criteria are studied at length, and the market share for each of these at the end of 2031 has been provided. Such valuable insights enable market stakeholders in making informed business decisions for investment in the global fibrin sealants market.