Furthermore, the increasing demand for improved lifestyle, especially among consumers across developed nations will aid the market’s expansion. According to Transparency Market Research (TMR), the global electric shavers market, which stood at US$10.8 bn in 2015, is forecast to reach US$17.72 bn by the end of 2024. If these figures hold true, the global electric shavers market will exhibit a positive CAGR of 5.7% between 2016 and 2024. 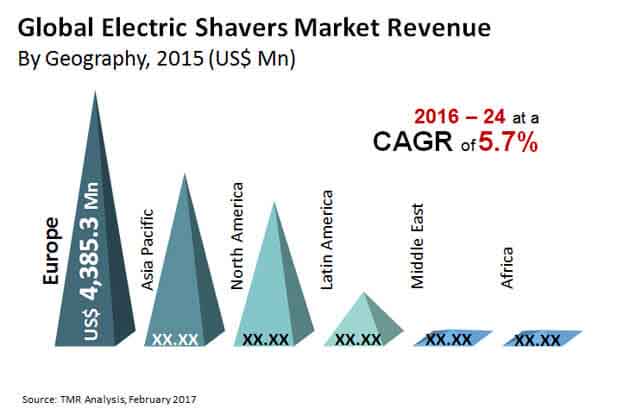 Based on product, the global electric shavers market is segmented into foil shaver, rotary shaver, wet/dry shaver, accessories, and clippers. Both in terms of revenue and volume, the clippers segment dominated the overall market in 2015. According to TMR, clippers accounted for over 71.37% of the overall market based on volume in 2015. The advent of this product has replaced its manual counterpart across many countries. Furthermore, owing to the cheaper price of clippers than other types of shavers, their demand is currently higher than other segments in the market. Besides this, the market also witnesses considerable demand for rotary and foil shavers.

By end use, the global electric shavers market can be broadly classified into male and female. Male users emerged dominant holding over 66.3% of the overall market in 2015. Through the course of the forecast period, male consumers will constitute the dominant segment. However, the rising preference towards personal grooming products is expected to fuel the demand for electric shavers among female consumers as well in the coming years.

According to TMR, the male segment will continue exhibiting steady demand for electric shavers on account of their daily use. Substantial growth is forecast for the female segment as the demand for convenient methods of hair removal scale higher. Moreover, the female users segment is likely to exhibit a higher CAGR during the course of the forecast period.

Nevertheless, the pace of gains will continue accelerating for the market. During the same time Asia Pacific is forecast to emerge as the most lucrative regions for electric shaver manufacturers. Rapid urbanization witnessed across emerging nations, coupled with the increasing disposable income and willingness of consumers to spend on personal grooming, will aid the expansion of the Asia Pacific electric shavers market.

The global electric shavers market is marked by intense competition from the major players operating in this market. Tactical mergers and acquisitions, joint ventures and partnerships, and product innovations are some of the key strategies adopted by these players to strengthen their position in the market. Panasonic Corporation, Procter & Gamble Co., Koninklijke Philips N.V. Spectrum Brand Holdings, Wahl Clipper GmbH and Conair Corporation are some of the key players operating in this market.

Electric shavers have gained rapid demand among the consumers over the past few years. The global shavers market is still dominated by the non-electric shaver segment, yet the demand for the same has seen a decline over the past few years. This is due to the convenience that is offered by electric shavers. Further, consumer awareness regarding hygiene is another factor that is complementing the growth of this market at present. They are widely used for the removal of unwanted hair that appears on the face or on other parts of the body. This process is done by the use of rotating or oscillating blades that are placed behind a metal guard. Electric shavers provide the most convenient form of shaving, hence they are gaining rapid acceptance among the consumers.

The global electric shavers market has been segmented on the basis of product, distribution channel, end use and region. The report provides the current market size and anticipates its status over the forecast period.

The report also analyzes factors driving and inhibiting growth of the electric shavers market. The report will help manufacturers, suppliers, and distributors to understand the present and future trends in this market and formulate strategies accordingly.

Electric shavers are gaining rapid demand due to consumer inclination towards automation. This is also fuelled due to consumer exposure to new technologies, which are done by way of advertisements and promotions through several channels. Increased spending capacity towards luxury items is another key factor which is complementing the growth. Population plays a key role in the growth of this market, although a very small percentage of the global population make up for the electrical shavers market at present.

However, entry of small scale players is expected to pave the way for low cost electric shavers in the market which is expected to gain consumer attraction. Since, majority of the consumers refrain themselves from buying such products due its high price, availability of low cost electric shavers would ensure proper growth of the market in the future, thus posing to be a suitable growth opportunity for the market.

The global electric shavers market has been segmented on the basis of product types into foil shavers, rotary shavers, wet/dry shavers, clippers and accessories. Clippers dominated the market in terms of revenue and volume, accounting for the major market share in 2015 and are expected to retain market dominance throughout the forecast period. Clippers are majorly used for cutting/trimming facial hair. Clippers are mostly preferred for cutting long hair and also since they come with varied type of attachments which are inclusive of guard combs of various sizes. They are also considered to be suitable alternatives for scissors. Majority of the salons and parlors have adopted the usage of clippers to cut long hair.

The market is also segmented on the basis of distribution channel into health & beauty stores, general merchandising/mass stores, supermarkets & hypermarkets and others. Supermarkets and hypermarkets accounted for the major market share in 2015 and are expected to retain market dominance throughout the forecast period. However, online channels are a lucrative target segment for the manufacturers of electric shavers. Due to the rapid advancements in technology and high adoption of 4G and 5G technologies among the consumers, online channels have proved to be a successful platform for the players operating in the field of electric shavers, by way of gaining a broader consumer base.

Geographically, Europe dominated the electric shavers market, in terms of revenue and volume. Consumer adoption of such products among both genders is the highest in the European countries such as Germany, U.K. France, Italy and others. High purchasing power of the consumers in Europe is another factor for the high revenue growth of this market in the European region. Asia Pacific is another major region for the electric shavers market. Rapid urbanization in countries such as India and China among others has led to an increase in the purchasing power of the consumers, which in turn has complemented the growth of the electric shavers market in Asia Pacific. Transition in lifestyle of the consumers is another major reason for the switch from conventional shaving products to electrical shavers. Asia Pacific is also the fastest growing market for electric shavers.

Some of the key players operating in the market are Procter & Gamble, Koninklijke Philips N.V., Spectrum Brand Holdings, Panasonic Corporation and Conair Corporation.

The report segments the electric shavers market as: