Wafer inspection systems are required for timely detection of physical and technological defects present within wafers. Currently, both e-beam and optical technologies are used in the detection of defects in wafers. With the application of e-beams manufacturers of compact devices are able to timely detect faults in wafers, thus saving the additional expenditure, which otherwise they would incur on re-inspection. The technology therefore ensures long-term usage of wafers across various industrial verticals. This has emerged as a key reason, positively impacting the overall trajectory of the global e-beam wafer inspection system market.

Increasing applications of thin wafers in manufacturing small or miniaturized devices used in micro-electro mechanical systems, laptops, and smartphones among others have bolstered the demand for e-beam wafer inspection system. Also the market is forecast to gain from the persistently rising activities in the semiconductor industry. These industrial activities will continue rising over the forecast period, delivering the e-beam wafer inspection system market with ample opportunities to gain from. 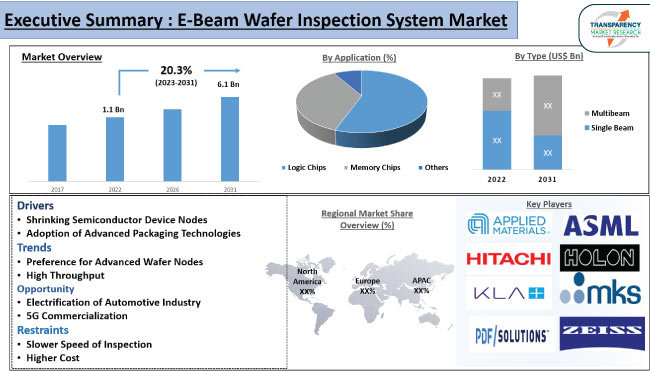 Detection Imaging to Remain Dominant Segment Based on Application

On the basis of application, the global e-beam wafer inspection system market has been segmented into defect imaging, lithographic qualification, bare wafer OQC/IQC, wafer dispositioning, reticle quality inspection, and inspector recipe optimization. Of these, defect imaging formed the largest application segment with a share of 38.5% in the market in 2016.  It is expected to remain dominant through the course of the forecast period. Besides this, inspector recipe optimization followed by bare wafer OQC/IQC have emerged as the application segments exhibiting strong prospects for the market.

Regionally, Asia Pacific, Europe, North America, Latin America, and the Middle East and Africa constitute the key segments in the global e-beam wafer inspection system market. Among these nations, Asia Pacific emerged dominant holding a little short of 60% share in the global market in 2016. In addition, North America and Europe have been demonstrating lucrative market opportunities over the last few years. These regions boast high investment in the research and development, which has led to extensive application of high quality wafers across diverse industries. With this, the use of e-beam wafer inspection system has also risen to detect any faults, thus giving significant impetus to the market.

Since Asia Pacific has showcased tremendous growth in the last few years, it offers lucrative opportunities for the market. Especially in emerging economies, the pace of industrialization is considerably bolstered. This has created attractive opportunities for the e-beam wafer inspection system market, as rising industrialization will mean increasing investment in miniaturization thereby boosting the scope of application for e-beam wafer inspection systems.

Market to Benefit from Increasing Demand for Consumer Electronics Sector

Steadily increasing demand for high-quality semiconductors has stemmed from augmented growth in the consumer electronics business, which includes products like LEDs, LCDS, wearables, gadgets, and smartphones. The inspection method is utilized in these systems to detect defects or faults in compact devices, which is estimated to support growth of the global E-beam wafer inspection system market in near future. Furthermore, manufacturers' increasing investments in innovation to provide high-precision semiconductor tools at lower costs is likely to support demand from the industry.  The demand for e-beam wafer inspection systems is being boosted by ongoing technological developments that are enabling semiconductor makers to use EUV lithography in their fabrication processes.

Lithography equipment is widely utilized in the processes of wafer fabrication in IC production technology and semiconductor manufacturing, which necessitates the detection of defects on the mask and wafer, resulting in a rise in the use of e-beam inspection in wafer fabrication. Manufacturers are concentrating their efforts on developing multiple e-beam inspection systems with  throughput and high sensitivity by incorporating sophisticated technology like computation to cater to the high demand for EUV lithography.

This report provides strategic overview as well as in-depth analysis of the global e-beam wafer inspection system market, during the forecast period from 2017 to 2025. Under the scope of this report analysis has been provided of various segments based on which the market has been segmented that includes type, application and geography. Increasing applications of thin wafers in the semiconductor industry along with the demand for accurate detection of wafer defects has been the most important factors that has boosted the demand for this market globally during the forecast period of 2017-2025.

This report takes into consideration the competitive analysis and different improvements made by the key players that are present in this market. Along with this, the market share analysis of the top players present in the market and the market attractiveness of different segments has been considered under the scope of this report. This also includes the business segments and strategic overview of key competitive players. Estimation and analysis of various drivers that are impacting the demand has been considered along with restraints and opportunities under the scope of this report. All these factors helps in determination of different market trends that has impacted the overall growth of market globally. Moreover, after taking into consideration all these factors, an in-depth analysis of the region wise growth factors and parameters of this market and an overall assessment has also been provided for the forecast period of 2017-2025 within this report.

There has been a rise in demand for thin wafers globally at a result of its growing applications in the form of miniaturized devices such as micro-electro mechanical systems. This has formed the major factor that has increased the demand for e-beam wafer inspection system globally. Along with this, there has also been a rise in demand for proper measurement of 3D structures that has also boosted the market demand globally. Moreover, use of this inspection system provides minimum charging of wafer thereby by maintaining a neutral imaging system further providing a high resolution image of the defects. In addition to this, there has been a growth in semiconductor industry especially in the developing economies that is also expected to increase the demand for wafers providing a boost to the overall market globally.

The high implementation costs associated with the product formed a major restraint for this market globally. Along with this, it is the availability of different substitute systems such as optical wafer inspection system and focused ion beams that allows mass wafer production has been another major restraint that may pose challenges for the growth of this market. Application of multi-beam inspection system is expected to provide various opportunities for the growth of this market in the coming years.

The global e-beam wafer inspection system on the basis of different types has been segmented into less than 1 nm, 1 to 10 nm and more than 10 nm. Defect imaging, lithographic qualification, bare wafer OQC/IQC, wafer dispositioning, reticle quality inspection, inspector recipe optimization and others are the different application segments that on the basis of which this market is segmented. Various regions that are considered under the scope of this report includes North America, Europe, Asia Pacific, Middle East, Africa and Latin America. The revenue for this market has been provided in USD million along with CAGR for the forecast period of 2017 to 2025.