As per Transparency Market Research, the global bra market is anticipated to chart a notable and sturdy growth curve over the assessment period of 2018 to 2026. This will not only help the market gain a higher valuation over the period but also line up the market landscape with advantageous opportunities. Besides, it is worth noting that the two regions that will hold the attention of global players are North America and Asia Pacific (APAC). As per analysts, the growth that the market is set to chart is a result of a number of factors.

Prominent factors that are laying the foundation of growth for the global bra market over the forecast period are detailed out below:

The bra market has grown significantly since the time of its evolution. Bra is innerwear designed to support women’s breasts. The bra market has shown significant rise in recent years since it is considered an essential necessity to every women. The bra market is fragmented, due to strong presence of several players. The competition is expected to intensify in the coming years due to entry of several local players. However, international players such as Fruit of the Loom, Jockey International, Inc., Wacoal, Group Chantelle, and The Phillips-Van Heusen Corporation are expected to cater to the masses by appealing to their needs at affordable pricing. Strong marketing and promotion activities are also anticipated to accelerate the bra market across the world. 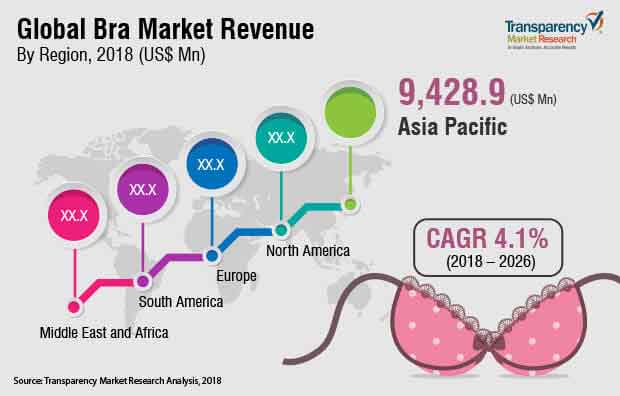 Rising number of working women has resulted in rise in demand for different types of padded bras. Younger women are getting increasingly sophisticated with increased purchasing power and are able to differentiate various brand attributes. Furthermore, women are changing their attitude toward innerwear and take time to choose and make a purchase. Outer wear of women has undergone dramatic change, and hence women prefer selecting inner wear, especially bra, that can match their attire. Bra purchase depends on the occasion. For instance, there is special sportswear bra for gymnasium purpose. This changing attitude of women toward innerwear isdriving the bra market. However, the cost of production of bra is very high. The high cost is due to the rise in price of raw materials required for production.This factor is majorly hindering the growth of the market and the impact of the same is likely to be medium throughout the forecast period.

The global bra market is segmented on the basis ofproduct type and geography. Based on product type, the market has been segmented into padded bra and non-padded bra. Padded bra and non-padded bra segment is further sub segmented into sports bra, nursing bra, convertible/multi-way bra, adhesive/stick-on bra, and others. As compared to non-padded bra, padded bra provides good support. Apart from having sponge-pads, a padded bra usually has an under-wire as well. This provides support to the breasts from sagging. These features of padded bra increases the number of production units for padded bra across the world. Moreover, growing emphasis on comfort and performance during sports activities has resulted in more athletes and sports enthusiasts choosing to purchase functional sports intimate wear, such as padded sports bra. These will continue encouraging bra manufacturers to increase their production capacity during the forecast period.

Asia Pacific is expected to show the fastest growth rate during the forecast period due to the rising number of premium brands and strong product innovation among manufacturers. Moreover, easy availability of raw material such as natural & synthetic fabric, button, elastic, straps, equipment & machinery, and others is expected to drive the production of bra in this region. Many international brands are planning to open or set up manufacturing facility in unexplored markets to increase bra production in the near future. North America is estimated to contribute major share tothe overall bra market. Women in North America are experimenting with latest trends. Thus, changing attitude of women toward innerwear isdriving the bra market in North America.

The bra market report provides analysis for the period 2016–2026, wherein the period from 2018 to 2026 is the forecast period and 2017 is the base year. The report covers all the major trends and key drivers playing a major role in the growth of the bra market over the forecast period. It also highlights the restraints and opportunities expected to influence the market’s growth during the said period. The study provides a holistic perspective on the growth of the bra market throughout the above mentioned forecast period in terms of revenue (in US$ Mn), and volume (in Million Units), across different geographies, including Asia Pacific, South America, North America, Europe, and Middle East & Africa (MEA)..

Rising number of working women has resulted in rising demand for different types of padded bra. The population of younger women is getting increasingly sophisticated with increasing purchasing power and can differentiate various brand attributes. Moreover, growing emphasis on comfort and performance during sports activities has resulted in more and more athletes and sports enthusiasts choosing to purchase functional sports intimate wear, such as padded sports bra. All these factors are expected to drive the global bra market during the forecast period (2018 - 2026).

In addition, female participation and popularity in sports has increased across the world. Increasing health awareness and higher expectation from functional sportswear, and demand for comfortable sports intimate wear has continuously increased, all of which are expected to drive the production units of global sports bra during the forecast period (2018 - 2026).

The report also includes key developments in the bra market. Porter’s Five Force analysis, which identifies bargaining power of suppliers, bargaining power of buyers, threat from new entrants, threat from substitutes, and degree of competition in the bra market, is also included in the report. Value chain analysis which shows work flow in the bra market and identifies raw material providers and distribution channels of this industry is also covered in the report. Segment trends and regional trends have also been highlighted. It also covers segment-wise incremental opportunity analysis and price trend analysis (production cost). Furthermore, the report covers incremental opportunity analysis and identifies and compares attractiveness of segments on the basis of CAGR and market share index across North America, Europe, Asia Pacific, Middle East & Africa, and South America. The same has been provided for each segmentation category i.e. product type and geography in the scope of the study. The report also covers brand share analysis region-wise for the bra market.

The report also includes competition landscape, which includes competition matrix, market share analysis of major players in the global bra market based on their 2017 revenues, and profiles of major players. The competition matrix benchmarks leading players on the basis of their capabilities and potential to grow. Factors including market position, offerings, and R&D focus are attributed to a company’s capabilities. Factors including topline growth, market share, segment growth, infrastructure facilities, and future outlook are attributed toa company’s potential to grow. This section also identifies and includes various recent developments carried out by leading players in the bra market and major brands of players. Hanesbrands Inc., L Brands, Inc, The Phillips-Van Heusen Corporation, Wacoal Holdings Corporation, LVMH Moët Hennessy Louis Vuitton SE, Triumph International, Jockey International Inc., Wolf Lingerie Limited, Groupe Chantelle, Fruit Of The Loom, Inc., Calida Group are some of the major players operating within the global bra market profiled in this study. Details such as financials, business strategies, recent developments, and other such strategic information pertaining to these players have been duly provided as part of company profiling.

The global bra market is segmented as below: