The global animal parasiticides market is expanding due to the rising prevalence of zoonotic and parasitic diseases in animals, across the globe. The global animal parasiticides market was valued at US$ 5,606.8 Mn in 2017 and is projected to surpass US$ 8,963.9 Mn by 2026, expanding at a cumulative annual growth rate (CAGR) of more than 5.5 % from 2018 to 2026. The global market is expanding at a relatively higher growth rate owing to increase in investments by governments in animal healthcare, high incidences of Lyme disease in companion animals, rise in R&D expense for development and eradication of parasites-related health issues, and rise in demand for meat and animal byproducts. 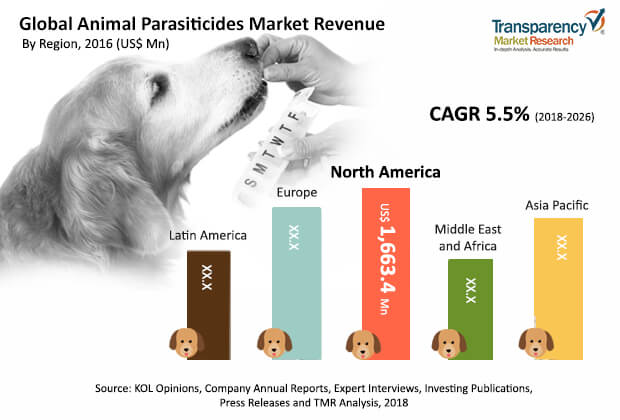 In terms of species, the global animal parasiticides has been segregated into food-producing animals (cattle, poultry, swine, and others), companion animal (dogs, felines, and others), and other livestock. The companion animal (dogs, felines, and others) segment dominated the global market and is likely to maintain its dominance and marginal increase its market share by the end of 2026. Increase in the rate of adoption of companion animals such as dogs and cats is likely to propel the segment during the forecast period. However, the food-producing animals (cattle, poultry, swine, and others) segment is likely to expand during the forecast period due to the rise in production of cattle for food globally, increasing the usage of new drugs and antibiotics in order to protect farm animals from parasites and diseases. Cattle as a food-producing animal is estimated to report significant gain in market share by end of 2026 due to increasing demand for production of cattle for meat and other byproducts. The rise in production of cattle meat and by products led to import and export trade relation of countries.

In terms of region, the global animal parasiticides market has been segmented into North America, Europe, Asia Pacific, Latin America, and Middle East & Africa. North America dominated the global market and is projected to lose market share by the end of 2026. The market in North America is primarily driven by the rapid increase in number of livestock cultivation and rise in infection among companion animals due to the presence of prominent types of ticks in the U.S. Moreover, rise in contract farming and independent farmers for livestock production farms has been observed in the U.S., which is projected to fuel animal production farms in the U.S. during the forecast period. The market Asia Pacific is projected to expand at a rapid pace during the forecast period. China dominated the animal parasiticides market in Asia Pacific, whereas the market in countries in Rest of Asia Pacific such as Vietnam and the Philippines, is estimated to expand at a significant CAGR during the forecast period.

Companies such as Boehringer Ingelheim GmbH, Ceva Santé Animale, Elanco (Eli Lilly and Company), Merck & Co., Inc., and Zoetis, Inc. accounted for a major share of the global animal parasiticides market in 2017. Zoetis, Inc., dominated the market due to its diversified product portfolio, extensive geographical presence, and acquisition strategies. In 2015, the company invested around US$ 1.0 Bn in two significant acquisitions, one of them being the acquisition of PHARMAQ, which strengthened Zoetis’ core livestock business. Other global players operating in the market include Bimeda Animal Health, Vetoquinol, Virbac, The Chanelle Group, Sunmitomo Chemical Co., Ltd., and Bayer AG. Companies are emphasizing on strategy acquisition and collaboration with parallel companies in order to improve and strengthen their geographic presence in the international market.

The animal parasiticides market report comprises an elaborate executive summary, which includes market snapshot that provides information about various segments. It also provides information and data analysis of the country’s market with respect to the segments based on product, species, and country. A detailed qualitative analysis of drivers and restraints, and opportunities has been provided in the market overview section. Additionally, the section comprises the Porter’s Five Forces Analysis to help understand the competitive landscape in the market. This section also provides market attractiveness analysis in terms of country and market share analysis by key players, thus presenting a thorough analysis of the overall competitive scenario in the global animal parasiticides market.

Based on product, the animal parasiticides market has been segmented into ectoparasiticides (oral tablets, dips, spray, spot-on, and others), endoparasiticides (oral suspension, injectable, feed additives, and others), and endectocides. The market segments have been extensively analyzed based on increased use of parasiticides products on different species. Demand for disease-free meat and increasing awareness for treating the cultivated cattle or livestock are . Different types of species utilize parasiticides to treat zoonotic diseases either in oral tablet form, feed additives, or injection methodology. In terms of product, ectoparasiticides plays a major role, followed by endoparasiticides. The market size and forecast in terms of US$ Mn for each segment have been provided for the period from 2016 to 2026. The report also provides the compound annual growth rate (CAGR %) for each market segment for the forecast period from 2018 to 2026, considering 2017 as the base year.

Based on species, the market has been classified into food-producing animals (cattle, poultry, swine, and others), companion animal (dogs, felines, and others), and other livestock. Companion animals is a highly important species segment, which utilizes parasiticides in large amounts. Increasing adoption of dogs as pets in urbanized society is a major factor that is likely to propel the segment during the forecast period. According to an article published in MDPI, in 2018, Australia has a significantly high pet ownership rate, with an average of 38% households owning a dog, higher than that of the U.K, which stands at 24%. However, the dog ownership rate in the U.S. is 48%, which was estimated to be around 4.1 million dogs admitted in animal shelters in 2016. These figures indicate the rate of usage of parasiticides for companion animals (dogs) in 2016. The market segments have been analyzed based on available approved products, cost-effectiveness, and preference from veterans for treating the animals with various disease indications. The market size and forecast for each of these segments have been provided for the period from 2016 to 2028, along with their respective CAGRs for the forecast period from 2018 to 2026, considering 2017 as the base year

In terms of region, the global animal parasiticides market has been segmented into five major regions, and the key countries in the respective regions are: North America (U.S., Canada), Europe (U.K., Germany, Russia, France, Spain, Italy, Russia, and Rest of Europe), Asia Pacific (Japan, India, China, Australia & New Zealand, and Rest of Asia Pacific), Latin America (Brazil, Mexico, and Rest of Latin America), and Middle East & Africa (GCC countries, South Africa, and Rest of Middle East & Africa). The market size and forecast for each of these regions and the mentioned countries have been provided for the period from 2016 to 2026, along with their respective CAGRs for the forecast period from 2018 to 2026, considering 2017 as the base year. The research study also covers the competitive scenario in these regions.

Global animal parasiticides market is segmented as given below: