Wearables are adopted and utilized in an extensive range of end use applications. However, wearables find immense opportunity in the healthcare and are able to address the burden of chronic disease, aging population, and spiraling cost of healthcare services.

Consumers who opt for wearables remain aware of their health conditions and can know about their heart rate, level of glucose, and blood pressure through a smartphone app. Such utilities of these devices are likely to drive the growth of the global wearable medical devices market in the near future.

Wearable medical devices come with multiple benefits, some of which are

The rapid growth of various industries such as remote patient monitoring devices and home healthcare are predicted to influence the global wearable medical devices market positively over the period of assessment. In addition to that, a growing focus of consumers on health and fitness has led to efforts toward leading a healthy lifestyle are anticipated to fuel growth of the market in the years to come.

The global wearable medical devices market was valued at approximately US$ 6.8 Bn in 2017 and is anticipated to reach a value of approximately US$ 29.6 Bn by 2026, expanding at a CAGR of 17.7% from 2018 to 2026. The global wearable medical devices market is driven by the rise in prevalence of chronic pain, increase in diabetic population, increase in the geriatric population, and a surge in the rate of adoption of technologically advanced wearable medical products. Furthermore, a rise in patient awareness and healthcare expenditure and technological advancements are expected to drive the market during the forecast period. 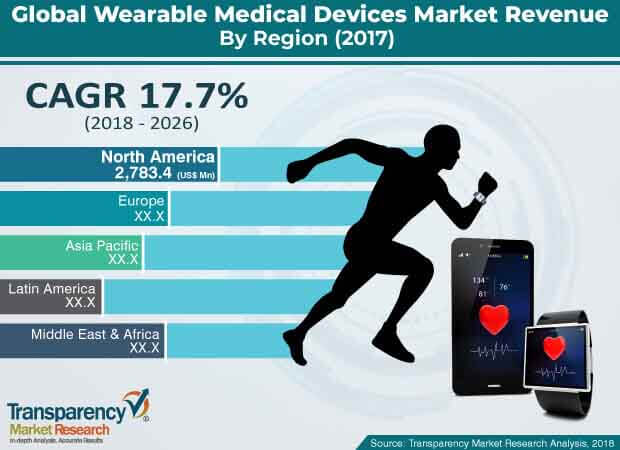 North America held a significant share of the global market in 2017. This is due to development of innovative products and increase in demand for products among the population. The U.S. held a major share of the market in North America as well as globally. The region is a major hub for innovation, where the world’s leading companies in the segment conduct research and development. According to the CDC, 29.1 million people in the U.S. have diabetes. Hence, demand for wearable glucose monitors, heart monitors, and activity monitors is rising constantly. Europe is a mature market for wearable medical devices. Therefore, the market in the region has been expanding at a sluggish pace due to a well-established network of major market players, which offers relatively fewer opportunities to new market entrants. However, a rise in the geriatric population and favorable health care reimbursement regulations are likely to drive the market in the region during the forecast period. Asia Pacific is an emerging market, offering significant potential. Expansion of the market in the region can be ascribed to the emergence of strong local manufacturers offering technologically advanced products at lower prices and increasing awareness among people about early diagnosis of chronic wounds.

This report analyzes the current and future scenario of the global wearable medical devices market. Rise in prevalence of chronic pain, increase in diabetic population, rise in the geriatric population, surge in the rate of adoption of technologically advanced wearable medical products, and rise in patient awareness and health care expenditure are key factors that are projected to drive the global market during the forecast period.

The global wearable medical devices market report comprises an elaborate executive summary, which includes a snapshot that provides information about various segments of the market. It also provides information and data analysis of the global market with respect to the segments based on device, product type, application, distribution channel, and region. A detailed qualitative analysis of drivers and restraints of the market and opportunities has been provided in the overview section. Additionally, the section comprises a competitive matrix and company profiles along with business overview to understand the competitive landscape in the market. This section of the report also provides market share analysis by key players, thereby presenting a thorough analysis of the overall competitive scenario in the global wearable medical devices market.

In terms of region, the global wearable medical devices market has been segmented into North America (the U.S. and Canada), Europe (the U.K., Germany, France, Spain, Italy, and Rest of Europe), Asia Pacific (India, China, Japan, Australia & New Zealand, and Rest of Asia Pacific), Latin America (Brazil, Mexico, and Rest of Latin America), and Middle East & Africa (GCC Countries, South Africa, and rest of Middle East & Africa). The market size and forecast for each of these regions and the mentioned countries/sub-regions have been provided for the period from 2017 to 2026, along with their respective CAGRs for the forecast period from 2018 to 2026, considering 2017 as the base year. The research study also covers the competitive scenario in these regions.

The global wearable medical devices market has been segmented as below: