The presence of an ever-expanding healthcare industry has played an integral role in driving sales across the global wearable injectors market. It is integral for patients suffering from chronic diseases to get proper treatment and dosage at regular intervals of time. Wearable injectors have emerged as a self-scalable and self-administered technology that can help patients in ensuring regular intake of medical dosage. The need for administering the right amount of medical fluid has brought wearable injectors under the spotlight of attention. It is important for medical professionals and healthcare experts to inform the masses about the importance of using new-age technologies such as wearable injectors and other devices. The rising incidence of chronic diseases that necessitate the use of seamless technologies shall be a prominent driver of market demand in the times to follow.

In the presence of various new technologies that have come to the fore of healthcare sector, it is easy to popularise wearable injectors that can work in tandem with other devices and technologies. Delivery systems are an important component of treatment processes as they help in timely administration of medical doses. In light of these factors, it is safe to expect that the global wearable injectors market would tread along a lucrative pathway in the times to follow 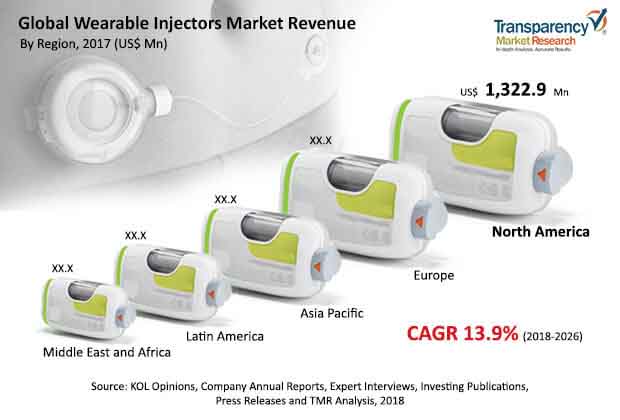 Utility Served by Wearable Devices for Patients of Chronic Diseases

The growing relevance of wearable injectors and technologies has created new pathways for market growth and maturity. Several medical experts have pointed to the potential of wearable technologies in helping the medical industry in expediting treatment processes. Minor jumps and medical advances can be a source of relief for patients suffering from chronic illnesses. The hassle of undergoing multiple manual procedures for administration of medical fluids can be extremely traumatizing for patients. Patients suffering from heart diseases, cancer, and diabetes are especially prone to suffering from excessive stress due to frequent exposure to hospitals for minor fluid administration. Therefore, use of wearable injectors has emerged as an important dynamic of market growth and maturity in recent times. It is legit to expect that the growth graph of the global wearable injectors market would ascend along a lucrative pathway in the years to come by.

Need for Convenient Administration of Drugs

On the basis of geography, the total volume of revenues within the North America wearable injectors market is projected to grow at a sound pace. Other regional pockets such as South America, Europe, Asia Pacific, and the Middle East have also witnessed a surge in demand for wearable injectors. The growth of the North America market can be pegged to advancements in medical research, wearable devices, and fluid administration. Furthermore, the growing focus on developing novel technologies for subcutaneous administration of fluids has also garnered the attention of the healthcare fraternity. Wearable injectors can be scaled for the amount of dosage and time that is apt for fluid administration. This is an important standpoint for popularising and promoting these injectors.

This report studies the current as well as future prospects of the global wearable injectors market. Stakeholders of this report include companies and intermediaries engaged in the manufacture, commercialization, and provision of wearable injectors for cancer and diabetes treatment, and new players planning to enter the market. This report comprises an elaborate executive summary along with a market snapshot providing overall information of various segments and sub-segments considered in the scope of the study. This section also provides the overall information and data analysis of the global wearable injectors market with respect to the leading segments based on type, application, end-uses, and region.

Based on type, the global wearable injectors market has been categorized into on-body wearable injectors and off-body wearable injectors. In terms of application, the market has been classified into oncology, diabetes, autoimmune disorders, cardiovascular diseases, infectious diseases, and others. Based on end-user, the global wearable injectors market has been divided into hospitals, clinics, home care settings, and others. Each of the segments has been extensively analyzed based on market related factors such as incidence and prevalence of cancer, diabetes, autoimmune disorders, cardiovascular diseases, and infectious diseases. Moreover, historical year-on-year growth has been taken into consideration while estimating the market size. The market size and forecast in terms of US$ Mn for each segment have been provided for the period from 2016 to 2026. The report also provides the compound annual growth rate (CAGR %) for each market segment for the forecast period from 2018 to 2026, considering 2017 as the base year.

The overview section of the report analyzes market dynamics such as drivers, restraints, and opportunities that currently have a strong impact on the wearable injectors market and could influence the market in the near future. Market attractiveness analysis has been provided in the overview section in order to explain the intensity of competition in the market across different regions. The competitive scenario among different market players has been evaluated through market share analysis in the competitive landscape section of the report. All these factors would help market players to take strategic decisions in order to strengthen their positions and expand their shares in the global wearable injectors market.

Geographically, the global wearable injectors market has been segmented into five major regions: North America, Europe, Asia Pacific, Latin America, and Middle East & Africa. The market size and forecast for each of these regions have been provided for the period from 2016 to 2026, along with their respective CAGRs for the forecast period from 2018 to 2026, considering 2016 as the base year. The report also provides with market size and forecast for major countries in the respective regions. A detailed qualitative analysis of factors responsible for driving and restraining market growth and future opportunities has been provided in the market overview section. This section of the report also provides with market attractiveness analysis, Porter’s Five Forces Analysis, and market share analysis by key players, thereby presenting a thorough analysis of the overall competitive scenario in the global wearable injectors market.

The global wearable injectors market has been segmented as follows: