A highly fragmented global vitreous tamponades market is distinctive in terms of dominance of a select number of players in each region. Keen players in the market have given thrust to research and development to introduce newer products to serve the demand for case-specific products for specialty medical procedures.

The global market for vitreous tamponades is primarily driven by the increasing incidence of retinal detachment, diabetic retinopathy, macular pucker, and other retinal disorders. As per statistics of the International Diabetes Federation, around 300 million diabetes cases were reported in 2010 globally and it is estimated to reach 438 million by 2030. The rising incidence of diabetes that is related to be a major cause of diabetic retinopathy and other retinal disorders is stoking the demand for tamponades to prevent impaired vision and even blindness.

Besides this, the growing geriatric population that is more susceptible to retinal breaks is also a key factor boosting the growth of vitreous tamponades market. 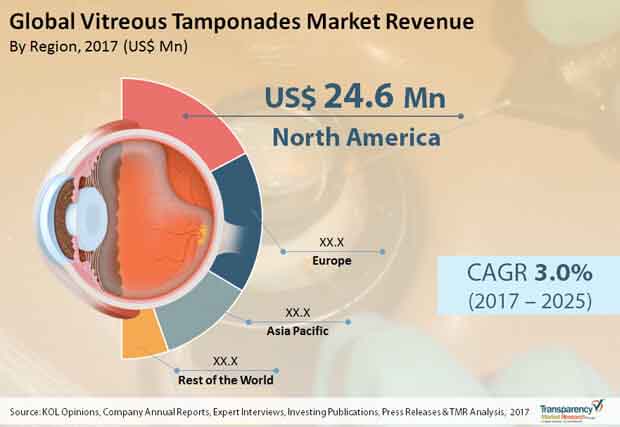 Gaseous Tamponades Gaining Traction due to Ease of Use, Low Cost

Gaseous tamponades, on the other hand, is expected to display the leading growth rate in the upcoming years. This is mainly because of low risk of emulsification, low cost, and ease of use. SF6, C2F8, and perfluropropane are the most common types of gaseous tamponades used in vitreoretinal surgeries worldwide. These gases offer advantages of being expansive that allows the retina and eyeball to gradually adjust to the occupying volume of the eye for better healing.

In terms of geography, the global vitreous tamponades market has been segmented into four major regions: North America, Asia Pacific, Europe, and Rest of the World. Powered by the U.S., North America held supremacy in terms of revenue over other key regions in the overall market in 2016. In the U.S., retinal detachment accounts as a major cause for morbidity with an incidence of 10.1 to 17.9 per 100,000 individuals.

Asia Pacific, on the other hand, is anticipated to emerge as a promising region and display increased market share over the forecast period from 2017 to 2025.

The worldwide market for vitreous tamponades is fundamentally determined by the expanding frequency of retinal separation, diabetic retinopathy, macular pucker, and other retinal problems. The rising occurrence of diabetes that is identified with be a significant reason for diabetic retinopathy and other retinal problems is stirring up the interest for tamponades to forestall disabled vision and even visual deficiency. Other than this, the developing geriatric populace that is more vulnerable to retinal breaks is likewise a key factor boosting the development of vitreous tamponades market.

The rising occurrence of retinal separation and other vitreoretinal messes that can be remedied with vitrectomy is decidedly affecting the vitreous tamponades market. Vitrectomy includes careful expulsion of the glassy humor to be supplanted with engineered substitutes known as glassy tamponades. In the natural eye, glassy humor is a crucial segment that goes about as nourishment and as a refractive medium. In case of injury or after maturing, the glassy humor breaks down prompting tearing or separation of the exceptionally delicate retina.

Additionally, developing old populace around the world is likewise considered as one of the key variables boosting the development of vitreous tamponades market. This is on the grounds that the matured populace has a high danger of retinal breaks that requires viable treatment.

This report on the global vitreous tamponades market analyzes the current and future prospects of the market. The report comprises an elaborate executive summary, including a market snapshot that provides overall information of various segments and sub-segments.

The research is a combination of primary and secondary research. Primary research formed the bulk of our research efforts along with information collected from telephonic interviews and interactions via e-mails. Secondary research involved study of company websites, annual reports, press releases, stock analysis presentations, and various international and national databases. The report provides market size in terms of US$ Mn for each segment for the period from 2015 to 2025, considering the macro and micro environmental factors. Growth rates for each segment within the global vitreous tamponades market have been determined after a thorough analysis of past trends, demographics, future trends, technological developments, and regulatory requirements.

A detailed qualitative analysis of factors responsible for driving and restraining market growth and future opportunities has been provided in the market overview section. This section of the report also includes market attractiveness analysis that provides a thorough analysis of the overall competitive scenario in the global vitreous tamponades market.

Market revenue in terms of US$ Mn for the period between 2015 and 2025 along with the compound annual growth rate (CAGR %) from 2017 to 2025 are provided for all the segments, considering 2016 as the base year. Market size estimations involved in-depth study of services and product features of different types of services. Additionally, market related factors such as rise in incidence of vitreoretinal disorders, increase in geriatric population, and rise in health care infrastructure have been taken into consideration while estimating the market size.

The vitreous tamponades market has segmented into three categories, namely by product type, by end-user and by region.

Geographically, the global vitreous tamponades market has been segmented into four regions: North America, Europe, Asia Pacific, and Rest of the World. In addition, the regions have been further segmented by major countries from each region. These include the U.S., Canada, the U.K., Germany, France, China, Japan, and India.