Venous Stents are mesh tubes, implanted in the veins for chronic symptomatic venous diseases. The venous stents function the same way as that of the arterial stents. They expand against the narrowed or obstructed veins and keep them open. They are the flexible devices used in the peripheral as well as central veins, and act as a scaffold for the vascular walls. Emergence of various efficient technologies for the precise placement of stents in veins, and rising investment of key players in the development of flexible venous stents with high radial strength are the major factors expected to drive the market of venous stents during the forecast period. However, low awareness about the venous interventional procedures in the developing countries is likely to restrain the market growth of venous stents during 2017-2025. 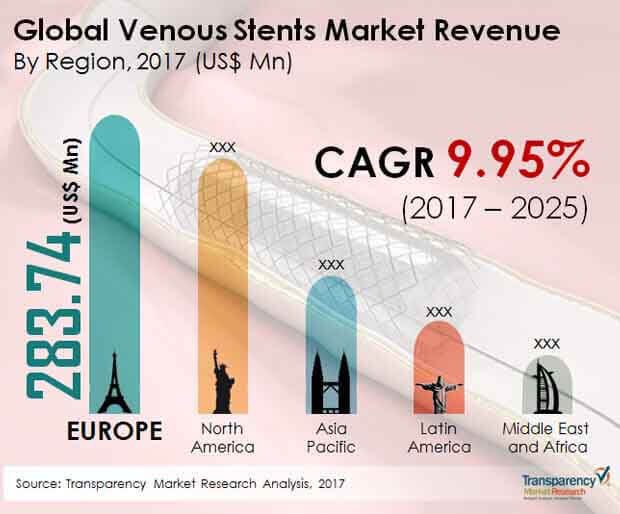 Based on application, the global venous stent market is segmented into leg, chest, abdomen, and arm. The leg application segment accounted for highest revenue in 2016, owing to the emphasis of key players on the venous stents development specifically for femoral & popliteal veins. Chest application segment is estimated to witness maximum CAGR during 2017-2025, which is attributed to the green signal by regulatory authorities for the approval of venous stents for superior vena cava.

On the basis of disease indication, the global venous stents market is divided into chronic deep vein thrombosis (DVT), Post thrombotic syndrome (PTS), May-Thurner Syndrome, Hemodialysis/Arteriovenous Fistulae, and others. Other disease indication segment is comprised of venous occlusion, re-stenosis, and nutcrackers syndrome. The others segment accounted for highest revenue in 2016, and is likely to remain dominant during the forecast period. However, chronic DVT is projected to register highest CAGR during 2017-2025, owing to the government participation in the venous disease management across the globe.

Geographically, global venous stents market is divided into five major regions, which are North America, Europe, Asia Pacific, Latin America, and the Middle East & Africa. Europe dominated the global venous stents market in terms of value in 2016. The region is estimated to remain dominant during the forecast period, due to strategic presence of key venous stents manufacturers in Europe. Ongoing clinical trials of venous stents in the U.S., and rising demand for clinically efficient venous interventional devices are the major factors for the estimated growth of venous stents in North America by 2025. However, Asia Pacific is likely to grow with relatively significant CAGR during 2017-2025, due to rising investment by public & private players for the betterment of healthcare services in Asia Pacific region.

The venous stents report comprises an elaborate executive summary, which includes market snapshot that provides information about various segments. It also provides information and data analysis of the global market with respect to the segments based on technology, application, disease indication, and geography. A detailed qualitative analysis of drivers and restraints, and opportunities has been provided in the market overview section. Additionally, the section comprises exhaustive mapping of all the products & companies operating in the global venous stents market, to help understand the competitive landscape in the market. An overview of critical venous diseases such as May-Thurner Syndrome and Post Thrombotic Syndrome in terms of their prevalence, diagnosis, symptoms, and treatment options are provided. A brief snapshot of ongoing clinical trials in the U.S. is also provided for better understanding of venous stents scenario in the U.S. This report also provides market attractiveness and its analysis in terms of geography and market share analysis by key players, thus presenting a thorough analysis of the overall competitive scenario in the Global Venous Stents market.

Based on the technology, the Venous Stents market has been segmented into Iliac vein Stent Technology, Wallstent Technology, and Others. Iliac Vein Stent Technology is considered to be a leading segment of Venous Stents market, owing to the improved access to the deep veins of iliac area. It is expected to continue to dominate the market in terms of revenue by 2025, which is attributed to the increasing investments by key players for the development of venous stents. The market size and forecast for each of these segments have been provided for the period from 2015 to 2025, along with their respective CAGRs for the forecast period from 2017 to 2025, considering 2016 as the base year.

Different types of applications in the Venous Stents market are Leg, Chest, Abdomen, and Arm. Legs accounted for highest market revenue in 2016, and is expected to remain leading in terms of revenue during the forecast period. The dominance is attributed to the shift of patients’ preference towards minimally invasive interventional procedures for the occlusion in femoral & popliteal veins.

Based on disease indication, the global Venous Stents market is segmented into 5 major segments, which are Chronic Deep Vein Thrombosis, Post Thrombotic Syndrome, May-Thurner Syndrome, Hemodialysis/Arteriovenous Fistulae, and Others. Other disease segment comprised of venous anastomosis, restenosis, and venous occlusions among others. The others segment is anticipated to lead the market during the forecast period, owing to the government participation in the control of venous disorders, and research grants by public & private players to promote the R&D of innovative venous stents.

The Global Venous Stents Market has been segmented as given below: