The most challenging vascular injuries involve trauma caused to the abdomen, pelvis, and retroperitoneal structures of the body. Complications such as difficulty in acquiring immediate proximal control & appropriate exposure, treatment of injury in face of contamination, and provisions for prolonged surveillance & follow-up have increased the need for vascular injury treatment.

Vascular injuries can occur in civilian as well as military setting. Traumatic vascular injury caused due to explosions and projectiles such as bullets and shrapnel severely affect the arteries and veins of the limbs, and trigger excessive blood loss and ischemia. Thus, there is the constant need for instant relief and effective treatment solutions for vascular injuries in military and emergency cases.

As such, healthcare providers in the vascular injury treatment landscape are adopting the extra-anatomical aortic bypass graft to solve grave vascular injuries in military and emergency cases. Adequately-sized interposition grafts help in the successful management and repair of damaged tissues and other serious vascular injuries. 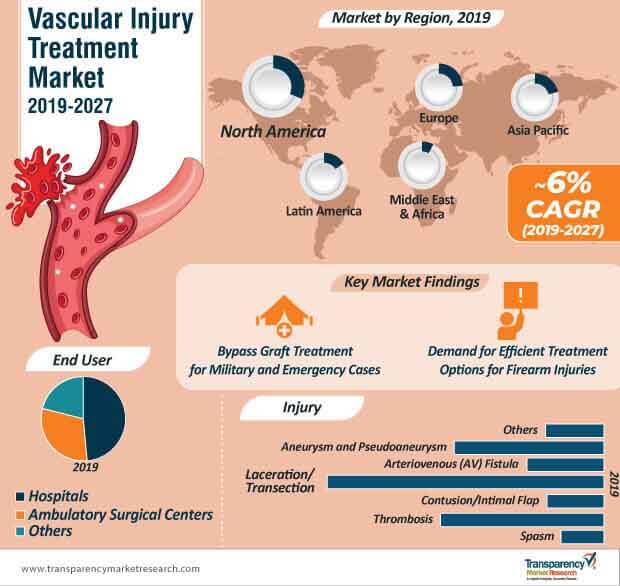 Growing incidences of anticancer drug induced arterial injuries are surfacing in the vascular injury treatment ecosystem. The side effects of chemotherapeutic drugs and anti-tumor medicines complicate treatment cycles. These side effects are some of the causes for the increase in non-cancer-related mortality rates, and affect the quality of life of cancer survivors. Growing incidences of arterial thromboembolic events (ATEE) are also associated with the consumption of anti-cancer drugs.

As such, stakeholders need to develop treatment solutions to assess the high risks of vascular complications, and innovate on antithrombotic therapies that keep a tab on thromboembolic and bleeding risks. Preventive measures and individualized chemotherapy serve as viable treatment steps to reduce the incidences of anti-tumor treatment-related vascular events. As such, ongoing research and development is being carried out to address ATEE risk stratification, which helps in early prediction and reduced complications in cancer survivors.

Improvements in Trauma Care: Need of the Hour for Firearm Injuries

A recent study on vascular injury treatment, conducted by researchers from the Boston University School of Medicine (BUSM), stated that, individuals who suffered firearm injuries and underwent surgical repair of major blood vessels were more susceptible to the high injury severity score (a scale made to predict in-hospital deaths).

In many cases, individuals that suffer firearm injuries due to gunshots undergo vascular injury treatment to repair the damage caused by bullets to major blood vessels. After several cross-validations, it found that, individuals who underwent surgical repair of their major blood vessels accounted for a high injury severity score as compared to those who didn’t undergo surgical repair treatment. Further studies showed that, the risk of death increased by five times, and complications increased three times, due to surgical repair treatment. 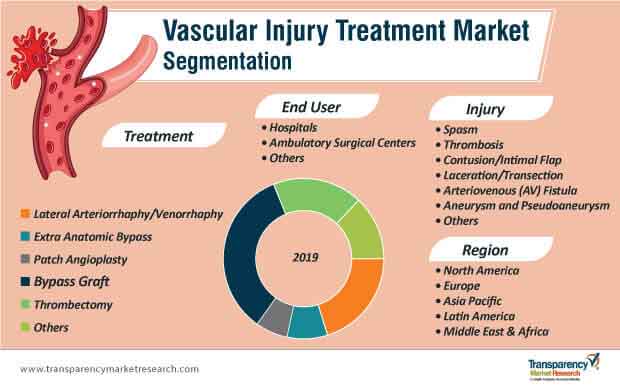 Research conducted by analysts of Transparency Market Research (TMR) comprises a systematic approach, with a view to obtain important insights into the vascular injury treatment market for the forecast period of 2019-2027. Interviews and discussions conducted with key market participants, opinion leaders, vendors, distributors, and industry experts are also included in the study. Additionally, an in-depth secondary study of company websites, marketing collaterals, industry associations, and government statistics is also carried out.