Unfractionated heparin is a naturally occurring anticoagulant that is primarily in dialysis and heart lung machines to prevent blood clots as well as for the treatment of blood clotting disorders such as deep venous thrombosis (DVT) and pulmonary embolism. Unfractionated heparin is also highly popular owing to its immediate onset of action, simple laboratory monitoring, short half-life, ability to get reversed (protamine), and low cost. 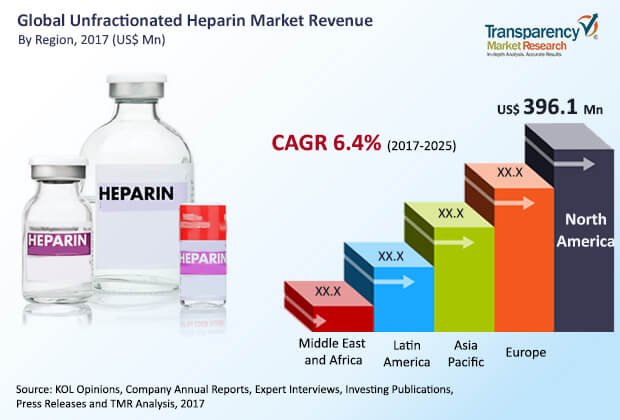 On the basis of distribution channel, the segment of hospital pharmacies dominates the market owing to the rising number of hospital surgeries and hospital stay. Rise in use of internet, and surge of e-commerce are expected to boost the growth of online pharmacies segment in near future.

The global unfractionated heparin market by geography has been studied for North America, Europe, Asia Pacific, Latin America and Middle East and Africa. North America is presently the leading contributor to the global market owing to the vast prevalence of DVT and PE in the U.S. Studies suggest that in the U.S., nearly 900,000 people are affected by DVT every year. Approximately 50% of DVT/PE patients develop long-term complications and one-third would have a recurrence within 10 years. Thus the demand for unfractionated heparin is high in the region.

Europe follows North America in terms of growth opportunities for the unfractionated heparin market. The burgeoning geriatric population on dialysis and rising incidences of coagulation disorders in the region are attributed to the high demand for unfractionated heparin in the region. Asia Pacific, Latin America, and Middle East and Africa are largely untapped regional markets and are expected to be the fastest growing markets during the forecast period. Data from the National Institute of Health Consensus depicted that the overall incidence of DVT after elective hip surgery in India is around 45% to 70%, whereas the probability of PE is approximately 20%. Growing economy, healthcare infrastructure and increasing number of surgical procedures in Asia Pacific, Latin America, and Middle East and Africa are likely to boost unfractionated heparin market in these regions.

This report on unfractionated heparin market studies the current as well as future prospects of the market globally. The stakeholders of this report include companies and intermediaries engaged in the manufacture, commercialization, providing unfractionated heparin products as well as new entrants planning to enter this market. This report comprises an elaborate executive summary along with a market snapshot providing overall information of various segments and sub-segments considered in the scope of the study. This section also provides the overall information and data analysis of the global unfractionated heparin market with respect to the leading market segments based on major sources, distribution channels, and geographies.

Based on the source, the unfractionated heparin market has been segmented on the basis of source into: bovine source and porcine source. Based on the distribution Channel: it can be segmented into Hospital Pharmacies, Retail Pharmacies and Online Pharmacies. Each of the market segments have been extensively analyzed based on the market related factors such as increasing adoption rate worldwide, technological advancement, and growing number of use of disposable products in various geographies. Moreover, historical year-on-year growth have been taken into consideration while estimating the market size. The market size and forecast in terms of US$ million for each segment has been provided for the period from 2015 to 2025. The report also provides the compound annual growth rate (CAGR %) for each market segment for the forecast period from 2017 to 2025, considering 2016 as the base year.

The market overview section of the report explores the market dynamics such as drivers, restraints, and opportunities that currently have a strong impact on the unfractionated heparin market and could influence the market in the near future. Market attractiveness analysis has been provided in the market overview section in order to explain the intensity of competition in the market across different geographies. The competitive scenario among different market players is evaluated through market share analysis in the competitive landscape section of the report. All these factors would help market players to take strategic decisions in order to strengthen their positions and expand their shares in the global unfractionated heparin market.

Geographically, unfractionated heparin market has been segmented into five major regions: North America, Europe, Asia Pacific, Latin America, and Middle East & Africa. The market size and forecast for each of these regions has been provided for the period from 2015 to 2025, along with their respective CAGRs for the forecast period from 2017 to 2025, considering 2016 as the base year. The report also provides with market size and forecast for major countries in the respective regions. A detailed qualitative analysis of factors responsible for driving and restraining the market growth and future opportunities has been provided in the market overview section. This section of the report also provides with market attractiveness analysis, Porter’s five forces analysis, market strategy overview, and market share analysis by key players, thus presenting a thorough analysis of the overall competitive scenario in the global unfractionated heparin market.

The global unfractionated heparin market is segmented as follows: