Unmanned aerial vehicle (UAV) propulsion systems are witnessing commercial applications beyond their traditional relevance in the military and defense sector, and are likely to draw volume sales tantamount to ~5.8 Bn units by the end of 2027. According to a recently published report by Transparency Market Research (TMR), UAVs have recently captured a lot of interest with the rise in cold wars and trade wars among various countries, and are deemed indispensable for the armed forces. A large number of developed countries have already embraced this modern surveillance system; however, with the current environmental scenario, strategic incentives are directed towards the development of propulsion systems that are propelled by fossil fuels and not combustion engines.

The potential use of drones in the packaging industry to facilitate the same-day delivery of goods is likely to widen the clientele base for UAVs, thereby fortifying opportunities for manufacturers. However, manufacturers have been expending efforts towards controlling the development costs of propulsion systems, which otherwise directly gets added on to the product cost. 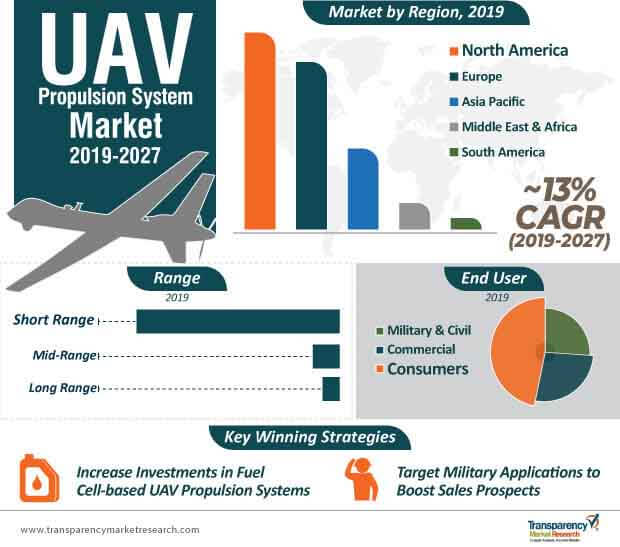 Fuel Cells - The Next Frontier in the UAV Propulsion System Landscape

With environmental concerns being at the front-of-the-mind focus, market players are taking propulsion approaches other than extant combustion engines, which is driving the shift towards the development of fuel cell and solar power. Fuel cells are gaining high traction as a viable alternative to small internal combustion engines, given their low heat and noise profile.

Besides this, market players are rethinking the designs of these propulsion systems for the development of fuel-efficient, lightweight, and high payload capacity systems, to set products apart and reap better sales opportunities.

The report also shows the sustained lead of North America in the UAV propulsion system market during the forecast period, given the region’s generous investments in the military and defense sector. However, promising growth of consumer goods industry and demand for drone-based delivery services are likely to augur well for the Asia Pacific market during the forecast period. 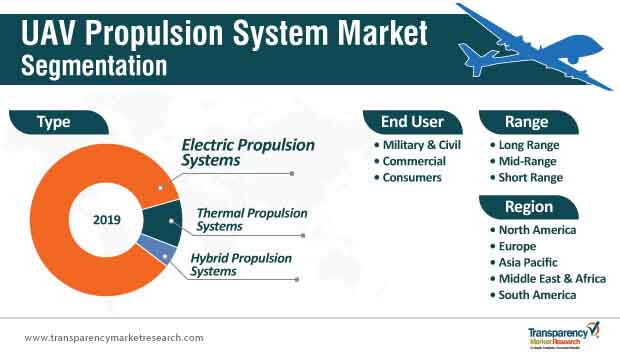 Stuck in a neck-to-neck competition with other brands? Request a custom report on “UAV Propulsion System Market"

Authors of the report maintain an optimistic perspective on the future of the UAV propulsion system market. Despite high capital expenditure requisites for full-scale integration and an overall payback period of around 3-4 years for market entrants, the landscape boasts of numerous consolidation-seeking players, who leverage an effective pricing strategy to have better exposure in the market. Besides cost, quality remains a distinguishing criterion for end users. A market major, Orbital UAV, prioritizes on achieving both - reduced cost with superior performance - with its focus on improving aircraft range, reliability, and durability of the propulsion system. All-in-all, market players can look at a CAGR of ~13% during the forecast period.

Key indicators of market growth, which include value chain analysis, supply chain analysis, and compounded annual growth rate (CAGR), are elucidated in TMR’s study in a comprehensive manner. This data can help readers interpret the quantitative growth aspects of the global UAV propulsion system market during the forecast period.