Such developments point at a positive outlook for the uptake of thermoelectric-based HVAC cooling systems in industrial and commercial environments. For instance, HVAC cooling systems based on the Seebeck effect that create voltage from temperature difference are increasingly being installed. Such moves are aimed to comply with governmental guidelines for energy-efficient processes and to reduce wastage of energy.

Exponential growth of the IT & telecommunications sector has indirectly led to a spurt in the demand for thermal products. HVAC cooling systems that use thermal products find wide use for cooling servers and computers. This serves to boost the thermal market, indirectly. Expansion of the food and beverage sector in developing economies such as India has indirectly led to a spurt in demand within the thermal market. Strong macro-economic indicators, reforms, and liberalized foreign direct investment have massively expanded the scope of individual operations for the production of food and beverages. Food production, packaging, shipping, and distribution are some energy-hungry operations in the food and beverage sector. Such operations heavily depend upon HVAC systems to maintain optimum indoor temperatures on shop floors. 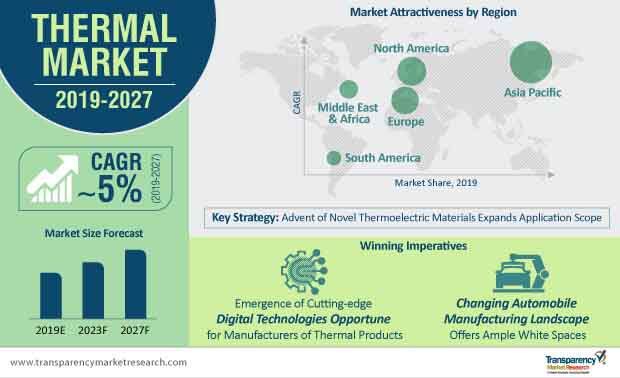 While thermoelectric systems are mostly used in cooling devices, these systems find use in the heating devices of HVAC systems. This further expands the scope of demand for thermal products, translating into growth for the thermal market.

Finding applications in high economic value end-use industries, thermal products and the associated thermal market are poised for significant growth. This aroused interest of Transparency Market Research to release a market intelligence publication of the thermal market. Following extensive research and employing standard analytical tools, TMR forecasts the global thermal market to rise at a ~5% CAGR during the forecast period of 2019 to 2027.

Among the key product types, the liquid cooling system segment is poised to display significant growth in the thermal market over the forecast period. The growth of this segment mainly stems to serve the demand of the IT & telecommunication sector, which is booming with digitalization in almost every walk of life. Serving this, liquid cooling systems are predicted to register a leading CAGR among other products in the thermal market during the forecast period.

On the other hand, the cooling equipment product segment holds a leading share in the thermal market, which is predicted to continue over the forecast period. This is because of the vast demand for cooling equipment from several end-use industries of high economic significance, including oil & gas, food & beverages, and chemicals & petroleum.

By end-use industry, the heavy metals and manufacturing industry holds a lion’s share in the thermal market, and is predicted to maintain its share over the forecast period.

Nonetheless, the IT & telecommunications sector is predicted to emerge as a significant end-use industry in the thermal market. Vast expansion of the IT sector to support mammoth volumes of data generated from commercial, industrial, and domestic sectors has led to a stir in the demand for core and support equipment. IT systems of large organizations with multiple servers require 24x7 uptime to serve employees working from multiple locations. This requires reliable cooling equipment to minimize the downtime of these IT systems. Cooling equipment plays a key role here, which, in turn, stimulates the growth of the thermal market.

In a moving vehicles, a large amount of heat is generated in the engine every time the spark plug ignites fuel in each cylinder to propel the vehicle. A cooling system plays a crucial role here to control these high temperatures so as to maintain a comfortable interior temperature for the passengers. 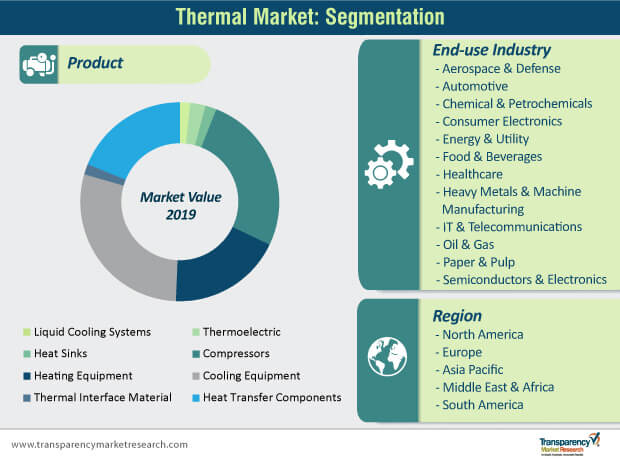 To get a bird’s eye view of Thermal Market forecasts, ask for a Custom Report

Changing consumer expectations from automobiles has led to a sea of change in the processes in the entire automotive ecosystem. Autonomous vehicles, biometric access for vehicles, and parameters of increased safety have led to requirements of several other energy-driven equipment and processes. This includes an array of thermal products such as heat sinks and heating equipment for the two-way transfer of heat. Such assemblies are examples of the Seebeck-Peltier effect for the transfer of heat and potential difference, and vice-versa.

The reshaping of the telecom sector over the past few years and adoption of cutting-edge technologies such as cloud computing and 5G technology have influenced the demand for thermal products to a great extent, in turn, fueling the growth of the market. The scope of development of new thermal technologies serves to provide lucrative opportunities for players in the thermal market. To leverage this, extensive R&D to develop equipment for various ambient temperatures is what savvy players are banking on for growth.

From a competitive standpoint, the thermal market features a fragmented vendor landscape, including established and emerging players. Nonetheless, leading players having a long presence in the market hold ~one-third share of the overall thermal market. Keen players vying to consolidate their position are focused on R&D. These companies are striving to develop next-generation thermal products to be compatible with the manufacturing assembly lines of advanced automobile companies.

The development of novel thermal products to cut energy costs is also the focus of keen players in the thermal market. For example, DCX The Liquid Cooling Company is focused on saving the energy consumption of industrial systems by almost 50%, and cutting the CAPEX and OPEX costs of running IT and telecom infrastructures.

Acquisitions and collaborations are also some growth strategies that players in the thermal market have resorted to. In a recent industry development, SPX Corporation – an Illinois-based company, completed the acquisition of Sabik Marine and Obstruction lighting business.

The ‘Competition Landscape’ section has been included in the report to provide readers with a dashboard view and company market share analysis of key players operating in the global thermal market.

Thermal Market – Scope of the Report

This research publication on the thermal market discusses past and current growth trends at length, and how these are likely to impact the growth of the said market over the forecast period. Porter’s Five Forces Analysis, value chain analysis, and SWOT analysis of the thermal market provides know-how of crucial growth tactics and opportunities for market players.

Key Questions Answered in this Report on the Thermal Market

The report on the thermal market is presented based on an in-depth and comprehensive evaluation of the said market. Analysts carried out extensive primary and secondary research, with opinions from experts to fill in gaps. Secondary sources for research include company websites, government websites, industry websites, journals, and white papers.

The report opens with a preface that sheds light on the scope and objectives behind this study. Following this, the overview section of the report is dedicated to research assumptions and research methodologies. Definitions, terms and terminologies, and abbreviations are also explained in this section. Statistical tools and research methodologies employed explained in this section too.

The report on the thermal market then moves on to the market overview section, wherein, analysts furnish details of the current market dynamics. The section also points out the key trends, growth opportunities, and critical restraints in the thermal market, adding value to the significance of this report. Following this is an extensive section on the key market indicators, outlining value for business. The second part of the overview section of the thermal market report comprises Porter’s Five Force Analysis and SWOT analysis, along with compliances in the ambit of thermodynamics ecosystems that were adhered to.