International travel has gained significant momentum in the past decade and the trend is showing no signs of slowing down. As per the data released by the World Tourism Organization (UNWTO), an astounding 1.4 billion international tourist arrivals were recorded - a 6% rise from 2017. As per the observable trends, tourists are traveling in huge numbers to tropical and sub-tropical countries, including Thailand, Spain, and India. However, tourists are at a high risk of being exposed to diarrheal pathogens in these regions and thus, traveler’s diarrhea has emerged as one of the most common health problems faced by international travelers. 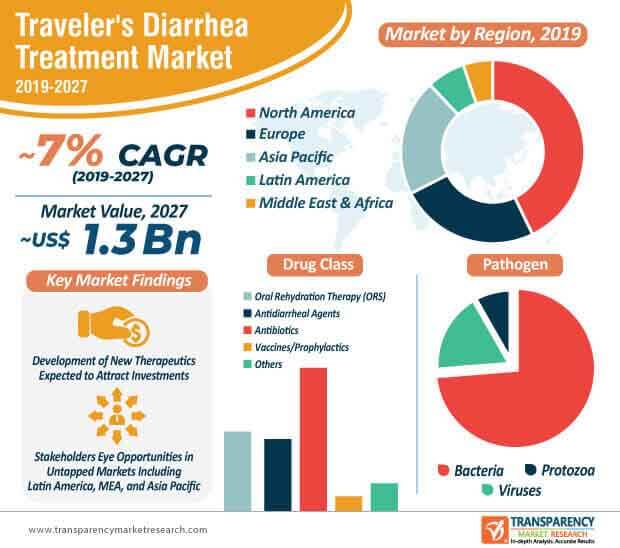 FDA Approvals for New Drugs for Treatment of Traveler’s Diarrhea

The Food and Drug Administration (FDA) has given approval to several new treatments and drugs in recent years. For instance, Aemcolo, an oral antibacterial rifamycin, was approved by the FDA in November 2018 to treat traveler’s diarrhea caused by E.coli. Clinical studies have revealed that rifamycin has greater efficiency in reducing the symptoms of diarrhea symptoms compared to placebo. Antibiotics are primarily recommended to treat severe traveler’s diarrhea. Despite a few side effects, within the drug class segment, antibiotics are likely to stay ahead with a market share of ~51% during the forecast period. The management and treatment of traveler’s diarrhea are expected to evolve, owing to the formulation of different guidelines laid down by regulatory bodies worldwide. As per the new guidelines, the use of antibiotics for mild traveler’s diarrhea is not recommended, as they have been linked to adverse events. 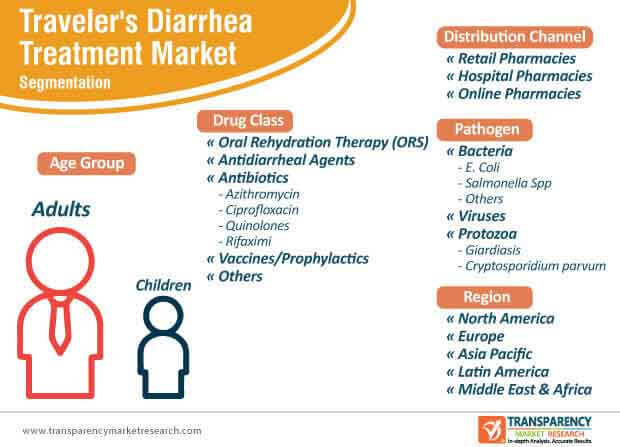 Stuck in a neck-to-neck competition with other brands? Request a custom report on “Traveler’s Diarrhea Treatment Market”

Surge in Number of Travelers and Awareness Among Travelers: A Key Driver

The report includes an elaborate executive summary, along with a snapshot of the growth behavior of various segments included in the scope of the study. Moreover, the report sheds light on changing competitive dynamics in the global traveler’s diarrhea treatment market. These indices serve as valuable tools for existing market players as well as for entities interested in entering the global traveler’s diarrhea treatment market.

A unique research methodology has been utilized by TMR to conduct a comprehensive research on the growth of the global traveler’s diarrhea treatment market, and arrive at conclusions on the future growth prospects of the market. This research methodology is a combination of primary and secondary research, which helps analysts warrant the accuracy and reliability of the drawn conclusions.