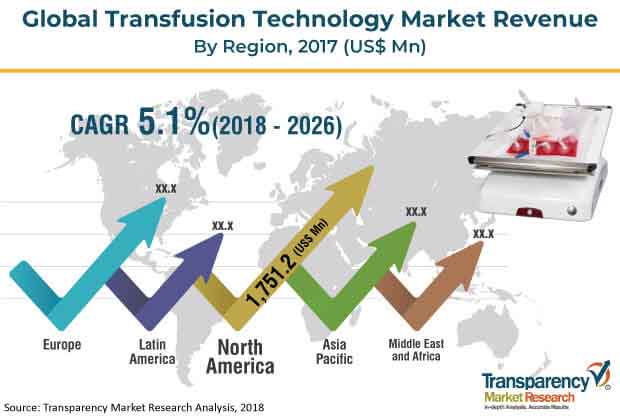 In terms of product, the global transfusion technology market has been classified into instruments and disposables & consumables. The instruments segment has been further bifurcated into apheresis system & multicomponent collection systems, cell processing systems & cell expansion systems, auto transfusion devices, and others. The others segment includes tube sealing system, sterile tubing welder, mixer technology, and point of care hemoglobin meters. The cell processing systems & cell expansion systems segment is projected to dominate the market during the forecast period due to advancements in the treatment of cancer, such as cell therapy. The auto transfusion devices segment is projected to expand at a significant pace during the forecast period. Expansion of the segment can be attributed to the increase in adoption of auto transfusion devices, as the risk associated with transfusion of allogeneic blood is reduced in these devices. Moreover, presence of key companies engaged in R&D and manufacture of innovative and technologically advanced transfusion devices boosts the global market. Furthermore, initiatives by public and private organizations that are aimed at spreading awareness about advantages of blood donation among people have led to a rise in the number of donors. The relatively stable growth rate of the instrument segment can be ascribed to the ‘as it is a capital investment’ in developing countries and stringent regulations regarding manufacture and approval. The disposable & consumables segment is anticipated to expand at an above-average growth rate during the forecast period, due to the high use of these transfusion technology devices by end-users. This is due to the implementation of stringent guidelines by government organizations to reduce the prevalence of transfusion-associated infection. Apheresis devices are predominantly utilized in hospitals and public & private blood banks for blood donation. End-users are increasingly preferring apheresis devices and multicomponent collection systems due to a rise in the demand for therapeutic apheresis.

Top-down approach has been employed for determining the size of the global transfusion technology market, using various market indicators obtained from secondary sources, which included analysis of launched products and mapping of demand for transfusion technology of top market players in specific regions. Top-down approach has been used to derive the market size of different product segments, wherein market size of parent market was obtained through secondary sources and analyzed for sales by narrowing down to revenue percentage for product segment through extensive analysis of investor presentations, press releases, primary interviews, and others. Data triangulation is based on both secondary research (top-down and bottom-up approaches) and primary research. Moreover, historical year-on-year growth has been taken into consideration while estimating the market size. Market value and forecast, in terms of US$ Mn, for each segment has been provided for the period from 2016 to 2026. The report also provides compound annual growth rate (CAGR) in percentage for each segment for the forecast period from 2018 to 2026, considering 2017 as the base year.

The overview section of the report explores market dynamics such as drivers, restraints, opportunities, and key trends that have significant impact on the global transfusion technology market and may influence it in the near future. Market attractiveness analysis has been provided to explain the intensity of competition in the market across regions. These analyses are likely to help market players take strategic decisions to strengthen their positions and grow their share in the global transfusion technology market. The report also comprises technological advancement overview.

In terms of region, the global transfusion technology market has been segmented into North America, Europe, Asia Pacific, Latin America, and Middle East & Africa. Market size and forecast for each of these regions have been provided for the period from 2016 to 2026, along with their respective CAGR for the forecast period from 2018 to 2026, considering 2017 as the base year. The report also provides market size and forecast for major countries in the above mentioned regions. A detailed qualitative analysis of factors responsible for driving and restraining the market and growth opportunities has been provided in the overview section.

The global transfusion technology market has been segmented as follows: