The relevance of extracorporeal therapy in medical sciences has created fresh opportunities for growth within the global apheresis market. There is growing demand for new and improved apparatus that can separate the constituents of blood. The need to isolate a particular constituent of blood stems from advancements in medical diagnostics. Blood samples are extensively used for testing and analysis of an individual’s health. The order or occurrence of infections in the blood is also decided with the help of blood samples. Considering the aforementioned factors, it is important to conduct apheresis on blood samples to be tested.

Apheresis procedures have been performed since 1950’s for various blood purification and blood component separation purpose. Apheresis is a procedure of blood component separation using centrifugation or membrane filtration technology. This procedure is performed either for donation of a blood component or for treatment of a disease by removal of the diseased or disease causing blood component. Whole blood is extracted from donor or patient’s body, processed through apheresis machine, and the desired blood components are separated based on their molecular weight, size, and affinity for particular substance. The remaining blood is transfused back to donor or patient’s body. Apheresis procedures are performed across the globe for treatment of various neurological, renal, hematological, autoimmune and other disease.

In the past few years, apheresis procedures have witnessed a stark rise in the number and areas of applications and the global market for these procedures continues to rise at an excellent pace. Presently, a variety of apheresis procedures are widely used as a part of treatment in various renal, neurology, hematology, cardiovascular and autoimmune diseases. Transparency Market Research states that the global apheresis market was valued at US$1.85 Bn. The market is projected to expand at a CAGR of 10.2% from 2017 to 2025 and reach US$ 4.33 Bn by 2025. 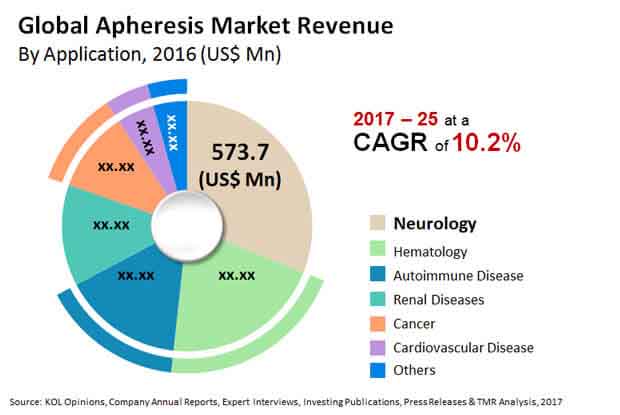 Photopheresis Procedures to Witness Most Promising Rise in Demand

However, the segment of photopheresis is expected to lead in terms of rate of growth as the segment is projected to exhibit an excellent 12.2% CAGR from 2017 and 2025. The vast technological advancements observed in the field of photophersis in the past few years have led to a vast rise in the procedure’s vast applications in areas such as cancer and hematology disease treatment.

Asia Pacific, with its considerably established apheresis market in countries such as Japan and emerging economies such as India and China, is projected to witness exponential growth during the forecast period. The regional market is expected to exhibit an excellent CAGR of 11.2% from 2017 to 2025. Factors such as the vast rise in the prevalence of chronic diseases, high geriatric population, and increasing healthcare expenditure in this region will play the key role in upping the demand for apheresis procedures in the next few years.

Rise in prevalence and incidences of chronic diseases such as multiple sclerosis, cancer, leukemia, etc. has increased the demand for plasma therapeutic products such as immunoglobulin, anti-coagulation factors, albumin, platelets, plasma, etc. In a bid to develop and produce the plasma derived medicines, many of the pharmaceutical and biotechnology industry players are striving for collection of plasma using apheresis procedure or by fractionation of whole blood. These factors has led to rise in donor and therapeutic plasma apheresis procedures driving the growth for global apheresis market. Public and private sector is supporting the apheresis industry in terms of reimbursement and funding, which is projected to uptake use of apheresis across blood collection centers and hospitals. However apheresis procedures are expensive as they incur high capital and operations cost, moreover skilled staff is required to operate apheresis systems which is anticipated to restrain the growth for global apheresis market.

Based on geography, global apheresis market is segmented into North America, Europe, Asia Pacific, Latin America and Middle East & Africa. North America was the largest market for apheresis and is projected to continue its dominance during the forecast period from 2017 to 2025. The U.S. contributed largest share in North America apheresis market in 2016. Asia Pacific region is projected to grow exponentially during the forecast period from 2017 to 2025. High prevalence of chronic diseases and increasing healthcare expenditure in emerging markets such as China and India is likely to propel this growth. Europe is projected to hold prominent share in global apheresis market and grow at strong CAGR during the forecast period from 2017 to 2025.

The global apheresis market has been segmented as follows: