The implementation of 5G wireless is anticipated to deliver new services in high-speed optical networks such as augmented reality and industrial IoT. As such, optical transceivers are projected to dominate the transceiver market with the highest revenue, estimated at a record ~US$ 36.8 billion by the end of 2027. Hence, manufacturers in the transceiver market are tapping into opportunities in machine learning, and the development of advanced drones and self-driving vehicles. The growing demand for 5G is catalyzing the demand for high-speed optical connectivity in cloud data centers.

Companies in the transceiver market are adopting quantum dot technology to create compact-size devices. They are increasing focus on developing miniaturized optical transceivers that are cost-effective and support transmitter-receiver optical sub-assemblies for inter-data center applications. 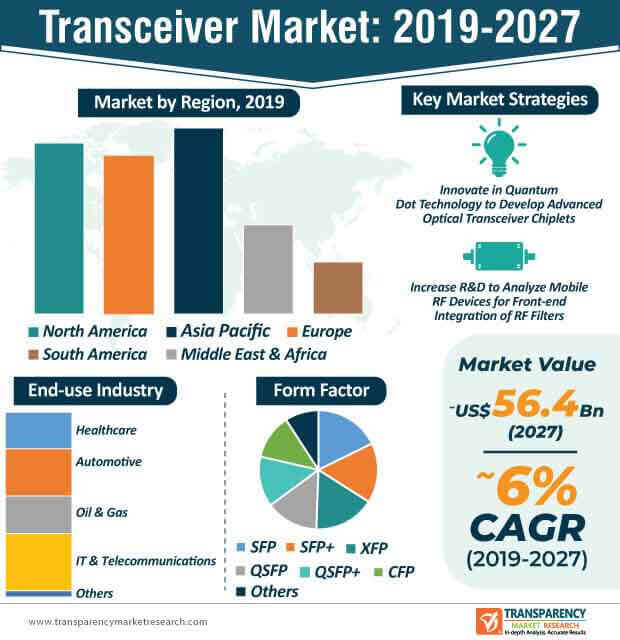 Request a sample to get extensive insights into the Transceiver Market

Increased Application of Transceivers in EW Systems and IT Boost Sales

Companies are increasing research efforts to maximize system flexibility by developing transceivers that integrate with multiple interfaces. They are increasing R&D to analyze mobile RF front-end architectures of smartphones to support global LTE (long term evolution) standards in the IT and telecommunications landscape. As such, IT and telecommunications accounts for the highest sale of transceivers, and is estimated to reach a value of ~US$ 12.7 billion by 2022, in the transceiver market.

The automotive industry accounts for the second-highest revenue amongst all end-use industries in the transceiver market that require technologically-advanced transceivers. Companies in the landscape are developing new Ethernet PHY (physical layer) transceivers that are standard-complaint and interoperable in automotive technology. These efforts are being made to offer sleep and wake-up-forwarding functionality in vehicles.

Ethernet PHY transceivers are helping automotive manufacturers reach their end goal of high efficiency in future electric vehicle architectures. Besides car brands such as BMW, JLR, and VW, automotive manufacturers are augmenting the application of Ethernet in infotainment, telematics, and ADAS (advanced driver-assistance systems) for other automobile companies. The trend of connected cars is further catalyzing market growth. 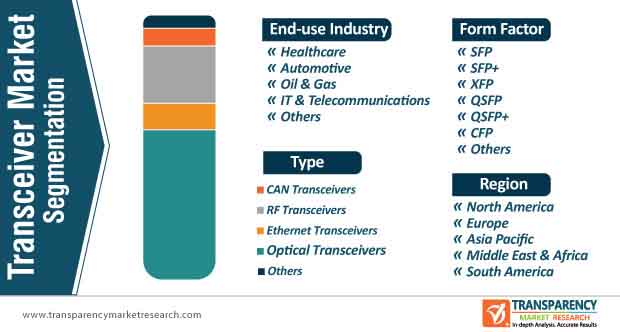 Stuck in a neck-to-neck competition with other brands? Request a custom report on Transceiver Market

However, challenges of base station receiver design pose a hurdle to manufacturers. Hence, they should develop novel integrated transceivers that offer desired sensitivity under specific conditions in base station receiver designs. Manufacturers should capitalize on the trend of 5G wireless to develop built-in gain phase calibration that minimizes radiation and boosts signal strength in devices.

Transceiver Market: Scope of the Report

Key indicators of market growth, which include value chain analysis, supply chain analysis, and compounded annual growth rate (CAGR), are elucidated in TMR’s study in a comprehensive manner. This data can help readers interpret the quantitative growth aspects of the global transceiver market during the forecast period.