Growing demand for minimally invasive surgeries has triggered the adoption of surgical robots. Equipment manufacturers are tapping into opportunities in robotic arms, systems, and devices to capitalize on the trend. As such, the systems component segment of the surgical robots market is expected to reach a value of ~US$ 4.1 Bn by the end of 2022.

Healthcare providers are increasingly benefitting from the introduction of novel surgical robots, since these machines are gaining clinical approval for challenging surgical operations. According to a survey conducted by the IEEE - an association for electronic engineering, surgical robots are gaining increased acceptance by millennial parents in Asian countries, as compared to the individuals in the U.S. and the U.K. This trend is well justified, since Asia Pacific is projected for aggressive growth during the forecast period.

Manufacturers are collaborating with technologists to improve the efficacy of robots that contribute toward better patient outcomes. Companies are increasing their efficacy in AI and machine learning to make surgical robots a mainstream technique in operating rooms worldwide. 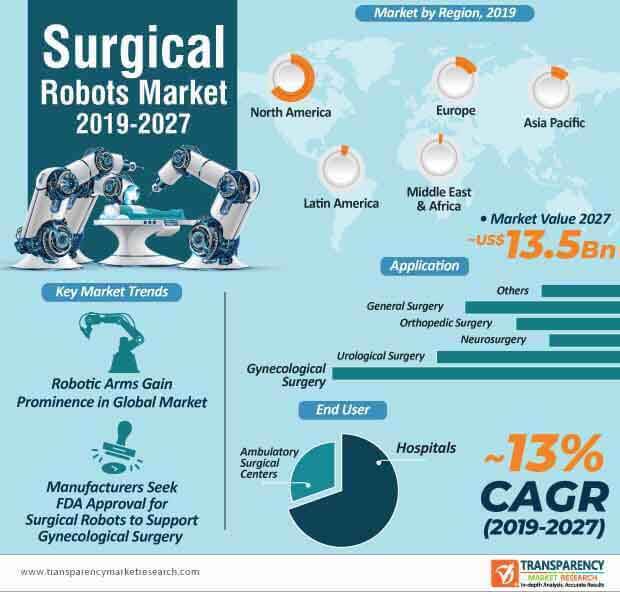 Companies are leveraging opportunities in orthopedic and neurosurgical operations, since these sectors are predicted for exponential growth during the forecast period. This trend is leveraged with AI to gain FDA and CE clearance for novel surgical robots. For instance, in January 2019, Intuitive Surgical - a U.S. leader in robotic products, announced its fourth quarter earnings for the FDA-approved da Vinci surgical systems that are gaining increased acceptance in the U.S. healthcare industry landscape.

Apart from the U.S., manufacturers are meeting the needs of healthcare providers for urological procedures.

Minimally invasive surgery is a modern technique that helps in executing complex surgical procedures with utmost precision. However, ambiguity associated with the haptic feedback of surgical robots acts as a barrier for its adoption by robot-assisted surgeons.

The surgical robots market is highly consolidated with only two major players accounting to ~90% of the total market share. This is another major challenge faced by emerging players who lack the budget, resources, and expertise to overcome the limitations of the haptic feedback associated with surgical robots.

Robotic-assisted surgeries are being increasingly adopted in the U.S. healthcare industry landscape, since the FDA has approved surgical robots for general laparoscopic surgeries. As minimally invasive surgeries are growing popular in globally, manufacturers in the surgical robots market are increasing research to augment high-resolution imaging and superior operative ergonomics in robotic systems. 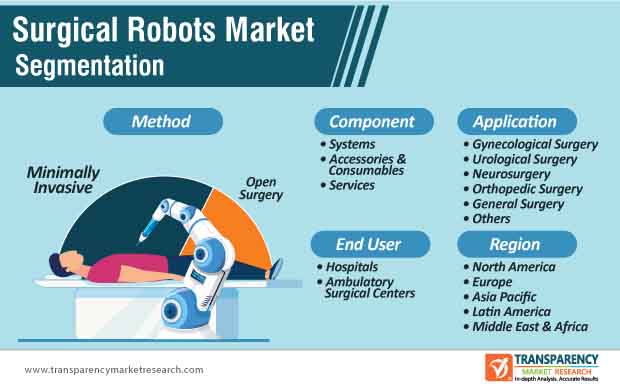 The surgical robots market is expected to expand at a significant CAGR of ~13% during the forecast period. Companies are eyeing high growth opportunities in Europe and Asia Pacific. Surgical robots are being equipped with AI and machine learning technologies for better outcomes.

However, overhead costs associated with advanced surgical robots such as installation, and service and training fees has slowed down the uptake of surgical robots, especially in budget-constrained hospitals of developing economies. Hence, manufacturers should introduce low-cost robotic systems that fit the budget of these hospitals. For instance, Johnson & Johnson - a U.S. multinational corporation has acquired a stake in Verb Surgical, - a California-based medical equipment manufacturer to develop low-cost robotic systems.

The report includes an elaborate executive summary, along with a snapshot of the growth behavior of various segments included in the scope of the study. Furthermore, the report sheds light on changing competitive dynamics in the surgical robots market. These indices serve as valuable tools for existing market players as well as for entities interested in entering the surgical robots market.