Silica flour is a finely ground silica sand that offers superior purity and very high silica content of around 98.0% or above. Silica sand mined from reserves is processed to obtain silica flour. Mined silica sand is washed, attritioned, scrubbed, hydraulically sized using mills with sieves of various mesh sizes, and dried to obtain different sizes of silica flour. A commonly used mesh size range for grinding silica sand is 50 mesh to 550 mesh. Silica flour ground using mesh size ranges of 100–200 mesh and 200–325 mesh are highly preferred for applications such as fiberglass, oil well cementing operations, sodium silicate, etc. These are among the major application segments of silica flour. There is comparatively high demand for silica flour produced using a mesh size of 100–325. The global silica flour market is likely to expand at a significant rate during the forecast period, owing to growth in end-user industries such as fiberglass, oil & gas, etc. 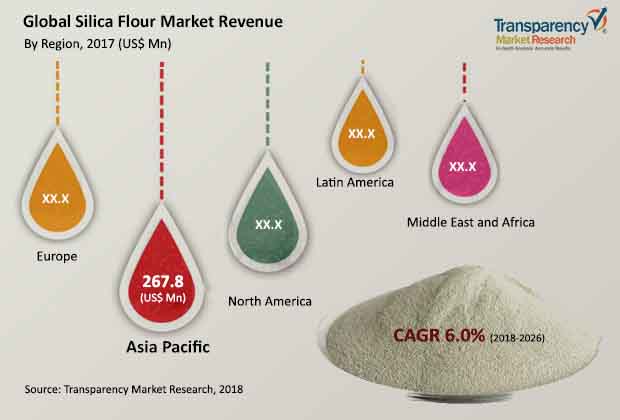 The report comprises a detailed value chain analysis, which provides a comprehensive view of the global silica flour market. The Porter’s Five Forces model for the silica flour market has also been included to help understand the competitive landscape in the market. The study encompasses market attractiveness analysis, wherein applications are benchmarked based on their market size, growth rate, and general attractiveness.

The study provides a decisive view of the global silica flour market by segmenting it in terms of application and region. These segments have been analyzed based on present and future trends. Regional segmentation includes current and forecast demand for silica flour in North America, Europe, Asia Pacific, Latin America, and Middle East & Africa. The report also encompasses demand for individual application segments in all the regions.

The silica flour market is primarily driven by an increase in crude oil prices, resulting in the increased use of silica flour for oil well cementing operations and expansion in the fiberglass industry. Several economies, such as those of the countries in Middle East, U.S., and China, are expected to benefit due to a rise in crude oil prices, which are anticipated to bring about rapid growth of the oil & gas industry and, in turn, boost demand for silica flour in oil well drilling operations. Furthermore, the companies Saudi Aramco and Saudi Arabian Basic Industries Corp. have signed an MoU for the development of a fully integrated crude oil to chemicals complex in Saudi Arabia. The plant is expected to process around 400,000 barrels/day of crude oil to produce about 9 million tons/year of chemicals and base oil. This is anticipated to boost the production of crude oil in the region in the near future, thereby driving the oil well cementing segment.

Key Takeaways of the Study

The global silica flour market has been segmented as follows: