The healthcare industry has been, and will persist under the influence of transmutation, as technological evolution has spawned and accelerated its pace. Shoulder replacement is one such development brought in, as the patient pool of the day prefers staying abreast with surgical treatments and has moved past medicines that have a propensity to be palliative rather than curative. As surgical procedures acclimatize to this shift, advancements in shoulder replacement surgeries become imperative.

With a cohort of macroeconomic factors such as growing geriatric population, microeconomic factors such as rising number of surgeries, and trends favoring reverse shoulder replacement surgeries, Transparency Market Research (TMR) senses enormous growth potential in the market. In its recent study, TMR beings to the fore critical parameters that lay their influences on the shoulder replacement market over the course of the forecast period of 2019-2027. 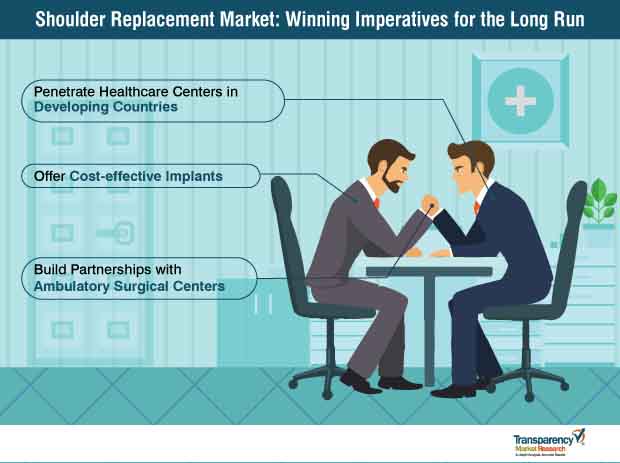 Safer and Reliable Implants: The Future of the Shoulder Replacement Market

Since the first shoulder replacement surgery performed in the 1950s, in North America, it maintained its status quo as an effective procedure in aiding consumers to overcome their shoulder-related challenges. According to our report, the shoulder replacement market value exceled US$ 2,000 Mn in 2018, and projections point toward its continuing dictate bullish prospects for the future.

The shoulder replacement market has been witnessing steady growth, and is likely to scale up by nearly 2X by 2027. The market will remain under the currents of innovations, as advanced surgical procedures make headway toward achieving 'reduced pain' and 'decreased recovery time', which completes the quest of patients leading demanding lifestyles. Advanced surgeries such as reverse shoulder replacement procedures are increasingly gaining traction among patients suffering from torn rotator cuffs, glenohumeral arthritis, and tumors in the proximal humerus in the shoulders, which is likely to set the tone for the future.

TMR finds that, the edge that shoulder replacement surgery has will serve as a leap for yet another innovative procedure, and steadily, the market will climb the growth stairs with an estimated CAGR of over 7% during the period of 2019-2027.

Hospitals at the Forefront of Adoption

Being an established region in terms of hospitals and ASCs, North America has been accommodating, and will continue to cater to the growing demand for shoulder replacement surgeries. Since developed countries hold the reputation of being a hub for 'safe' and 'effective' surgeries, this perception will create favorable opportunities for the North America shoulder replacement market, followed by Europe. However, developing countries can serve as a goldmine of opportunity for investments and expansion for market players.

Asia Pacific is likely to remain an opportunistic region for the shoulder replacement market, as a large geriatric patient pool and dense population in this region can make for an ideal customer base. Wide horizons for the medical tourism sector, in light of government regulations favoring local players, and relatively low surgery costs are likely to add an extra sheen to the lucrativeness of the shoulder replacement market in the region.

However, in developed as well as developing economies, high cost continues to impede the otherwise expected smooth ride of the shoulder replacement market during the forecast period. Financial lucidity of consumers has made them independent enough to spend out-of-the-pocket on their health. However, the costs of these surgeries are high even after an insurance cover, which is preventing the market from realizing its full potential. 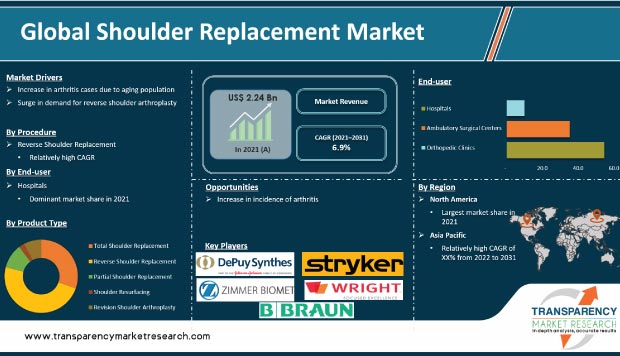 Prioritize the Needs of Patients

Though hospitals have traditionally been the preferred venue for surgeries, the numbers obtained by us foresee a contender - ambulatory surgical centers, which have been upping their game to contend with the former. This brings about a clearer picture, which shows that, patients go in for surgeries that are effective. Putting consumers at the center of the business would also translate into developing implants and procedures that considerably reduce pain and help them recover much faster.

The growth in medical tourism activities in developing countries can serve as a crucial weapon to target the pool of consumers whose decisions remain heavily reliant on the price tag. Additionally, a huge consumer base with a majority of geriatric population in developing countries awaits proper healthcare facilities, which can be leveraged to gain an edge over competitors.

Analysis of the Competitive Landscape

The shoulder replacement market remains competitive at various levels. The market is significantly being dictated by the top players - Wright Medical Group N.V., DJO Global, Zimmer Biomet, Stryker, and DePuy Synthes, boasting of a royal consumer base. These companies leverage research and development activities to develop surgical solutions and patent them. For instance, in March 2019, Wright Medical Group N.V. presented its novel REVIVE revision shoulder system at the Annual Meeting of American Academy of Orthopedic Surgeons (AAOS), in the U.S. This advanced REVIVE prosthesis has been developed to facilitate the humeral reconstruction procedure, and enhance its function and stability. The system will offer independent control over implant rotation and fixation to the surgeons.

Frontrunners in the market are also forming alliances with other contenders to leverage two-way benefits engendered by the venture. Regional players, in contrast, eye the pie dominated by global players, as they acquire a significant share by offering relatively low-cost implants amid declining reimbursement and skyrocketing surgical product cost scenario. 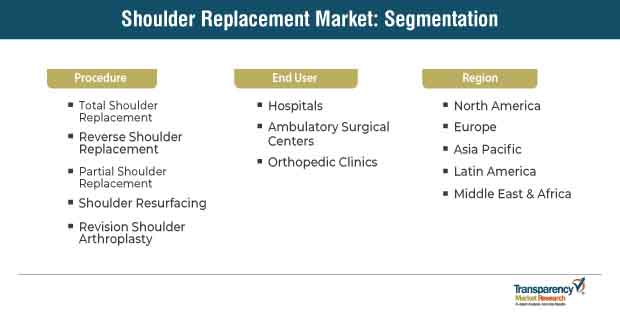 The authors of the report maintain a bullish stance on the future of the shoulder replacement market, with a cohort of drivers dictating its growth. The shifting paradox of clinics from anatomic to reverse shoulder surgeries as a panacea to degenerative joint disorders is likely to favor the market. Manufacturers who invest in the development of advanced and customized prosthesis will continue to appeal to the end users and drive impressive sales opportunities. Governments will also play their parts in helping surgeons expand their skill sets, and, in turn, increase the number of expert surgeons. The growing confidence of consumers in advanced surgeries, such as reverse shoulder surgeries, has been encouraging manufacturers to invest in research and development activities for improving patient outcomes and reducing failure rates, while investments in emerging countries can bear fruitful results in the long run.

What are the Key Questions Answered in the TMR’s Shoulder Replacement Market Report?

Analyzing the drivers determining the growth of the shoulder replacement market, TMR brings to the fore crucial actionable intelligence for the readers. The comprehensive guide can provide key answers to the queries of key industry participants. Some of the questions include:

Transparency Market Research (TMR) follows a systematic approach to come to an estimation of the shoulder replacement market for the forecast period of 2019-2027. TMR takes a bottom-up and top-down approaches to conduct the research of the shoulder replacement market. The bottom-up approach includes finding significant players, their revenue, and the market share generated by these players. In order to carry out primary research, interviews with top industry experts were conducted, which includes chief medical officers, vice presidents, chairmen, directors, presidents, and CEOs.

Secondary research was conducted through company websites, financial reports, investor presentations, press releases, publications, blogs, and journals. The data obtained through primary and secondary research is then validated through the data triangulation method, to filter out any redundant information and offer precise insights into the shoulder replacement market for the forecast period of 2019-2027.

What are the Key Segments of the Shoulder Replacement Market?

Information regarding Y-o-Y growth, pricing, supply chain, and value chain analysis has been included in the report. Additionally, the report also consists of country-wise assessment of the shoulder replacement market.