A rising elderly population and increasing allocations for research and development of new drugs is what is serving to drive growth in the global rheumatology therapeutics market. This has led to the emergence of many new drugs. Their swift approvals by the appropriate authorities has also led to the growth in the market. 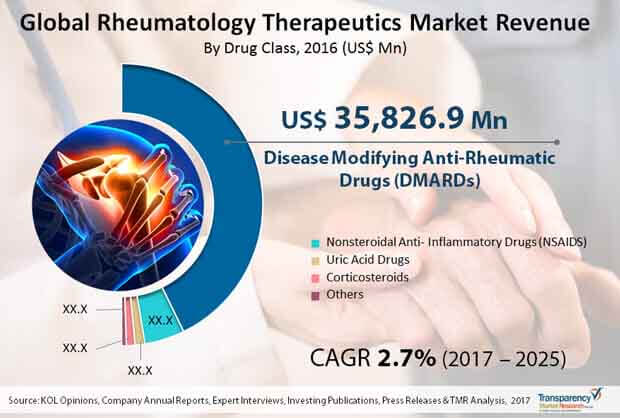 Depending upon the drug class, the key segments of the global rheumatology disorder market are disease modifying anti-rheumatic drugs (DMARDs), non-steroidal anti-inflammatory drugs (NSAID’s), corticosteroids, uric acid drugs, etc. The DMARDs, which is a group of medicines or combination of medicines used to treat rheumatic diseases by blocking the inflammation, accounts for maximum shaee in the market at present. They are categorized into two major types - biologic DMARDs and synthetic DMARDs.

The biologic DMARDs are mostly used for the treatment of various rheumatic diseases such as rheumatoid arthritis, psoriatic arthritis, and ankylosing spondylitis. The patent expiry of top brands such as Humira, however, is expected to deal a blow to the growth in the segment. Market pundits predict the challenge will eventually be overcome by the wide pipeline of other biologics such as interleukin-6. By rising at a 2.6% CAGR from 2017 to 2025, the segment is projected to pull in a revenue of US$45.06 bn by 2025 from US$35.83 bn in 2016. Azathioprine, cyclophosphamide, cyclosporine, and methotrexate are highly used synthetic DMARDs for the treatment of rheumatic diseases.

In terms of growth rate, corticosteroids are anticipated to surpass all other segments by clocking a CAGR of 4.4% from 2017 to 2025. Rising at this rate, the segment is projected to pull in a revenue of US$1.22 bn by 2025. Their increasing use in developing countries will likely boost their demand.

From a geographical standpoint, North America accounts for a leading share in the global rheumatology therapeutics market because of a rapid rise in the elderly population, who are afflicted with different types of rheumatology disorders. In addition to that, adoption of biologics and biosimilars products for the treatment of moderate to severe rheumatoid arthritis and well-established healthcare facilities has also provided a major boost to the market in the region. Europe trails North America vis-à-vis market size. In terms of growth rate, however, Asia Pacific is predicted to lead. This is because of the significant proportion of population suffering from rheumatoid arthritis and osteoarthritis, increasing per capita healthcare expenditure and approvals of biosimilars for the treatment of several types of rheumatology disorders.

Treatment of rheumatic diseases, including rheumatology therapeutics, are escalating in attention for medical researchers and drug makers world over. The marked incidence of rheumatoid arthritis (RA), especially among women, is the key driving force for R&D in the rheumatology therapeutics market. RA is characterized by chronic inflammation of the synovial membrane, and leads to joints destruction, when the disease progresses. Overall this severely impacts the quality of life in affected. A number of classes of drugs have emerged in the management of RA—most notably Disease Modifying Anti-Rheumatic Drugs (DMARD). International bodies have been active in formulating recommendations for treatments, both pharmacological and non-pharmacological, especially for RA. A case in point is the European League Against Rheumatism (EULAR). The classes of drugs are varied and complex. Glucocorticoids (GC) are widely accepted in managing the disease flares, and lowering disease activity. New treatment guidelines pertain to improving conventional synthetic DMARDs. For instance, if DMARD as first line of therapy renders inefficacy, then biologic DMARDs have gained attention of clinicians. New strategies are being tested in the rheumatology therapeutics market with the help of bDMARD are expected to enrich the landscape in the next few years.

The post-pandemic world has witnessed new normals toward unlocking consumer propositions. Businesses from across all industries have realized the pressing need for new operating and strategic frameworks to gain or regain agility in the wake of disruptions Covid-19 pandemic has triggered in the past few months, especially in 2020. A growing number of companies are unlocking new consumer value by increasing their stakes on new product and marketing mix. Moreover, in the aftermath of the pandemic, the economic and health burden of  rheumatic diseases has also increased. Use of new information systems has helped numerus companies to absorb the macroeconomic and microeconomic shocks of the pandemic. In recent months, new virus variants have raised bells of alarms for governments in some countries. This has also triggered a global consensus and solidarity to combat the rising infections. The collaborations are also witnessed among businesses across different industries to help produce all essential items, such as vaccines and oxygen cylinders.

Out of the rheumatoid arthritis disease has high prevalence rates than other disease and accounts for the major share in global rheumatology therapeutics market. There are many different drugs and medications have been developed including biologics and biosimilars. Disease modifying anti-rheumatic drugs (DMARDs), nonsteroidal anti-inflammatory drugs (NSAIDs), corticosteroids, uric acid drugs are some of the most commonly used drugs for the treatment of different types of rheumatic diseases. The NSAIDs are widely and frequently used for the symptomatic treatment of rheumatoid arthritis and osteoarthritis. Most of the regulatory authorities recommends the use of DMARDs as the first line of treatment for rheumatoid arthritis after diagnosis of this disease.

The global rheumatology therapeutics market is projected to be driven by the increasing geriatric population in developed countries, increase in the number of new drugs approval and growing R&D investments. According to CDC, more than 54 million American are affected with arthritis in 2017 and it projected that by the end of 2025, this number would reach to 78 million. Also according to world arthritis day, more than 120 million people in European Union are affected by some of the forms of arthritis. The growing geriatric population in developed countries is likely to be key driving factor for global rheumatology therapeutics market.

The demand for the development of newer and technologically enhanced products such as biologics and biosimilars (generic of biologics) is growing globally. Hence, major players operating in the rheumatology therapeutics market are investing in research and development programs to develop new drugs. In 2015, Takeda Pharmaceuticals invested US$ 3.2 Bn in research and development activities. According to an annual report published by GlaxoSmithKline plc. In 2015, the company partnered with more than 1,500 companies and other academic organizations around the world for development of new drugs.

Global rheumatology therapeutics market is broadly segmented into five segment based on drug class, disease indication, by route of administration, by distribution channel and by geography. By drug class, the market is segmented into disease modifying anti-rheumatic drugs (DMARDs), non-steroidal anti-inflammatory drugs (NSAIDs), corticosteroids, uric acid drugs and others. DMARDs segment dominated the global rheumatology therapeutics market in 2016 owing to increase in usage of these drugs in early stage of disease and growing adoption of biologics drugs for treatment of moderate to severe rheumatoid arthritis and osteoarthritis.

By Geography, the global rheumatology therapeutics market is segmented into North America, Europe, Asia Pacific, Latin America, and Middle East & Africa. These regions have been further segmented by countries, methods, applications and end-users. North America dominated the market and is anticipated to lose its market share to Asia Pacific region by the end of 2025.

Global Rheumatology Therapeutics Market is segmented as given below: