As per a report published by the National Institutes of Health (NIH), approximately 12 million adult population is diagnosed with Chronic Obstructive Pulmonary Disease (COPD) annually in the U.S. Further, 120, 000 people die of the cause. As per a statistics provided by Global Asthma Network (GAN), approximately 334 million are, reportedly, suffering from COPD across the globe. In addition, as per data given by the WHO, 3 million people die due to COPD around the world.

Every report by prominent health organization is signaling towards growing incidence of Chronic Obstructive Pulmonary Disease across the world and its adverse impact on health of the people. Some of the significant cases of COPD include respiratory allergies, asthma, occupational lung diseases, and pulmonary hypertension. Prevalence of such diseases is witnessed in middle- and low-income countries. 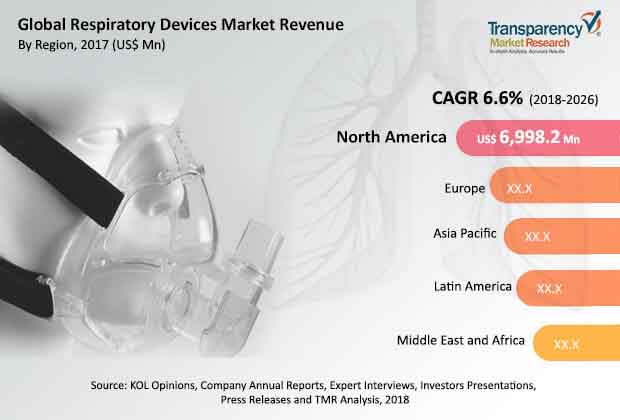 These factors, altogether, are contributing to expansion of the respiratory devices market.

As per a report published by Transparency Market Research, the respiratory devices market is anticipated to growth at a moderate CAGR of 6.5% between 2018 and 2026 (forecast period). In the year 2017, the respiratory devices market stood at a value of US $ 17 billion. If the market scales at predicted CAGR, then the market size is projected to grow equivalent to US$ 31.0 Bn by the end of 2026.

Rising prevalence of sleep apnea and COPD, healthy competition among key player, investment from various stakeholders are major driving factors likely to fuel the global respiratory device and uncertain regulations by government bodies may interfere with the market growth during the forecast period.

Rising awareness regarding application of respiratory devices and associated benefits is expected to boost the market in coming years. Adoption of on-demand and continuous Portable Oxygen Concentrator (POC) in a wide range of applications including emergency medicine is emerging as a fresh growth prospect for expansion of the global respiratory devices market.

Registering the application areas, players operating in the global market are consistently working to bring innovation in the product, providing efficient solution and on subsequently reducing the price of units.

These companies are introducing products on basis of clinical urgency for greater mobility support for elderly population and growing demand for the portable technology by consumers. Diversified product portfolio is anticipated to gain wide customer traction.

Further, advent of technologically respiratory devices, which offers efficient patient is projected to accelerate the market growth.  Technologically advancement in delivery devices has resulted in integration of sensors coupled with pulse dose meters. These devices enable to regulate flow of the oxygen. Adoption of respiratory therapy is growing significantly. The growth rate is attributed to the potential benefits offered by the devices. These benefits include faster response rate, efficient dosing, controlled flow, and greater reliability and durability. These aforementioned factors are likely to propel the industry expansion process.

Growing prevalence of respiratory diseases such as sleep apnea and Chronic Obstructive Pulmonary disorder is anticipated to boost market growth. As per a report published by the WHO, nearly 64 million people across the globe suffers from mild to severe COPD. In addition, COPD is found to be third leading cause of death across the world. Rising demand for protracted treatment and emergency treatment associated with lung diseases in children and adults are likely to boost the market growth during the forecast period.

Further, respiratory therapeutics devices are preferred by medical professionals and physicians for treatment of various types of respiratory disorders. These devices provide immediate medical intervention in case of acute and chronic patient care.

In recent years, North America market has accounted for prominent share in the global respiratory devices market. Prominence of the region is attributed to presence of well-developed healthcare infrastructure, growing awareness among population, and constant technological advancements.

The region is likely to lead in coming years as well, owing to growing patient pool affected by respiratory diseases. Rising prevalence of COPD is anticipated to fuel demand for respiratory devices in the region.

The report comprises an elaborate executive summary, which includes a market snapshot that provides information about various segments of the market. It also provides information and data analysis of the global market with respect to the segments based on product type, application, and region. A detailed qualitative analysis of drivers and restraints of the market and opportunities has been provided in the overview section. Additionally, the section comprises competitive matrix and company profiles with business overview to understand the competitive landscape in the market. This section of the report also provides market attractiveness analysis by region and market share analysis by key players, thereby presenting a thorough analysis of the overall competitive scenario in the global respiratory devices market.

In terms of product type, the global respiratory devices market has been segmented into therapeutic devices and diagnostic & monitoring devices. The therapeutic devices segment has been classified into drug delivery devices, mechanical ventilators, continuous positive airway pressure, resuscitators, humidifiers, airway clearance devices, oxygen concentrators, consumables & disposables, and others. The diagnostic & monitoring devices segment has been categorized into pulse oximeters, capnographs, spirometers, polysomnographs, peak flow meters, gas analyzers, and others. Based on application, the market has been divided into chronic obstructive pulmonary disease, asthma, obstructive sleep apnea, respiratory distress syndrome, cystic fibrosis, and pneumonia. The global respiratory devices market has been analyzed based on increasing cases of respiratory diseases, technology trends, expenditure on emerging technology, and presence of key players. The market size and forecast for each of these segments have been provided for the period from 2016 to 2026, along with respective CAGRs for the forecast period from 2018 to 2026, considering 2017 as the base year.

Geographically, the global respiratory devices market has been segmented into five major regions and the key countries in the respective region: North America (the U.S. and Canada), Europe (the U.K., Germany, France, Italy, Spain, and Rest of Europe), Asia Pacific (China, India, Japan, Australia & New Zealand, and Rest of Asia Pacific), Latin America (Brazil, Mexico, and Rest of Latin America), and Middle East & Africa (GCC, South Africa, Israel, and Rest of Middle East & Africa). The market size and forecast for each of these regions and the mentioned countries have been provided for the period from 2016 to 2026, along with their respective CAGRs for the forecast period from 2018 to 2026, considering 2017 as the base year. The research study also covers the competitive scenario in these regions.

The global respiratory devices market has been segmented as follows: