The second half of the past century has been a relatively peaceful duration for the humanity and populations have prospered across developed and emerging economies. As a result, geriatrics are now constituting for a prominent chunk of the world’s population. And with that – the healthcare industry is flourishing, as geriatrics are prone to several bodily disorders, especially arthritis, chronic low-back pain, and joint pain. The advent of radiofrequency ablation devices has paved a minimally invasive surgical procedure that can adequately serve pain management, and the market for the same is primed to excel in the near future.

According to the findings of this business intelligence report, the demand in the global radiofrequency ablation devices market for pain management will expand at an impressive CAGR of 12.9% during the forecast period of 2017 to 2024. Revenue-wise, the vendors of pain management market will generate a demand for RF ablation devices worth of US$1,114.5 million by the end of 2024, substantially more than the market’s evaluated worth of US$477.3 million as of 2017.

Apart from the increasing population of geriatrics and strong prevalence of chronic pain, increased investments by multinational medical device companies to harness the concept of minimally invasive surgeries and recent approvals and launches of technological advanced devices are expected to drive the demand for radiofrequency ablation devices. On the other hand, regulatory hurdles and availability of other low-cost therapeutics for pain management are a few restraints obstructing this market from attaining greater profitability. Nevertheless, the analyst of the report foresees the emerging economies of China, India, and Brazil to open vast new opportunities in the near future. 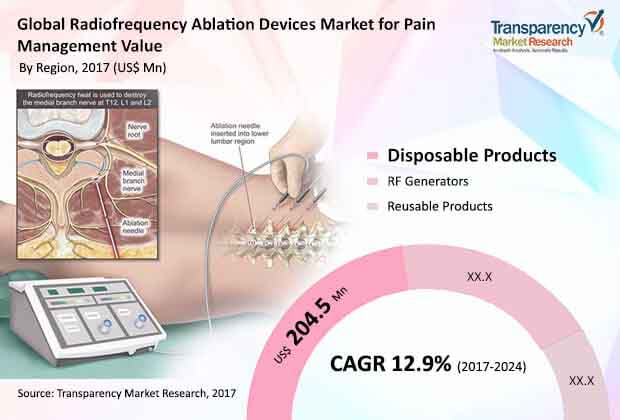 On the basis of product type, the market for RF ablation devices market for pain management has been segmented into RF generators, reusable products including electrodes and probes, and disposable products, which have been further bifurcated into needles, cannulas, and single-use probes and electrodes. As of 2017, the sub-segments of disposable products generated the most prominent chunk of demand, which was worth US$204.5 million. Benefits of disposable cannulas and probes include reduction in sterilization costs. Additionally, connector cables provided for single use probes are long enough to stay out of the sterile field, thus preventing infection.

On the other hand, the RF generators segment is poised to expand at an above-average CAGR of 13.1% during the period of 2017 to 2024. Technological advancement such as cooled radiofrequency technology platforms which allow creation of larger lesions without excessive heating at the electrode fuels the growth of the segment. By the end of 2024, the pain management market is expected to produce a demand for RF generators worth of US$401.1 million.

The report has also evaluated the demand potential from the end users: hospitals, specialty clinics, and ambulatory surgical centers, with the former poised to provide for a demand worth of US$538.4 million by 2024, which will represent nearly half of the overall demand.

North America to Overtake Europe as Most Lucrative Region by 2024

North America is projected to continue to dominate the market, accounting for 38.3% share by 2024. The segment is anticipated to reach value of US$426.4 million by 2024. The U.S. dominated the market in North America due to the existence large population base, higher awareness, significant health care spending in overall national budgets, early availability of advanced technologies, and higher penetration of health care services across the country. Europe, on the other hand, is estimated to offer 33.5% of the overall demand by the end of the aforementioned forecast period.

St. Jude Medical, Inc., Boston Scientific Corporation, and Halyard Health, Inc. have been identified as the three companies currently dominating the RF ablation devices market for pain management. The report profiles these and several other companies in its featured section on competitive landscape.

This report on radiofrequency ablation devices for pain management market studies the current as well as future prospects of the market globally. The stakeholders of this report include companies and intermediaries engaged in the manufacture, commercialization, and provision of services of radiofrequency ablation devices for pain management products such as RF generators, reusable products, and disposable products, and new entrants planning to enter this market. This report comprises an elaborate executive summary along with a market snapshot providing overall information of various segments and sub-segments considered in the scope of the study. This section also provides the overall information and data analysis of the global radiofrequency ablation devices for pain management market with respect to the leading market segments based on product, end-user, and geography.

Based on product type, the radiofrequency ablation devices for pain management market has been segmented into capital equipment (RF generators), reusable (probes, electrodes), and disposable (cannula, needles, single-use probes, and single-use electrodes). Each of the market segments has been extensively analyzed based on the market related factors such as increasing rate of accidents leading to traumatic injury, aging population, technological advancement, and growing number of disabilities in various geographies. Moreover, historical year-on-year growth has been taken into consideration while estimating the market size. The market size and forecast in terms of US$ Mn for each segment has been provided for the period from 2014 to 2024. The report also provides the compound annual growth rate (CAGR %) for each market segment for the forecast period from 2017 to 2024, considering 2016 as the base year.

The market overview section of the report explores the market dynamics such as drivers, restraints, and opportunities that currently have a strong impact on the radiofrequency ablation devices for pain management market and could influence the market in the near future. Market attractiveness analysis has been provided in the market overview section in order to explain the intensity of competition in the market across different geographies. The competitive scenario among different market players is evaluated through market share analysis in the competitive landscape section of the report. All these factors would help market players to take strategic decisions in order to strengthen their positions and expand their shares in the global market.

Geographically, the radiofrequency ablation devices for pain management market has been segmented into five major regions: North America, Europe, Asia Pacific, Latin America, and Middle East & Africa. The market size and forecast for each of these regions has been provided for the period from 2014 to 2024, along with their respective CAGRs for the forecast period from 2017 to 2024, considering 2016 as the base year. The report also provides market size and forecast for major countries in the respective regions. A detailed qualitative analysis of factors responsible for driving and restraining the market growth and future opportunities has been provided in the market overview section. This section of the report also provides market attractiveness analysis, Porter’s Five Forces Analysis, value chain analysis, pricing analysis, and market share analysis by key players, thus presenting a thorough analysis of the overall competitive scenario in the global radiofrequency ablation devices for pain management market.

The key findings section included in the report would assist existing market players in expanding their market shares, and new companies in establishing their presence in the global market. The report also profiles key players operating in the radiofrequency ablation devices for pain management market including Boston Scientific Corporation, Diros Technology, Inc., Halyard Health, Inc., and St. Jude Medical, Inc. The global radiofrequency ablation devices for pain management market is dominated by three global players that account for over 88% share of the global market.