According to a new market study published by Transparency Market Research (TMR), the global vitreous tamponades market will rise at a modest 2.50% CAGR from 2014 to 2020, reaching US$77.5 mn by 2020. The report is titled ‘Vitreous Tamponades Market - Global Industry Analysis, Size, Share, Growth, Trends and Forecast 2014 - 2020’ and provides a comprehensive analysis of the progress of this market for the client’s perusal.

TMR analysts find that the vitreous tamponades market is witnessing a steady transformation over the past few years with respect to the state of the tamponade used, with conventionally used liquid state tamponades increasingly being replaced by gaseous state tamponades. Vitreous substitutes display elasticity and biocompatibility, which make these devices suitable as an intra-operative or postoperative tool for the correction of vitreoretinal disorders.

Since the inception of modern vitrectomy techniques in the 1970’s, the utilization of vitreous substitutes to be used for healing of the retina has been on the rise. Increasing incidence of macular pucker, diabetic retinopathy, and other retinal disorders that require attentive care of the retina during the course of treatment is fueling the vitreous tamponades market. In addition, the increasing number of geriatrics, who are more susceptible to retinal breaks, in the world are augmenting the demand for vitreous tamponades for effective retinal care. 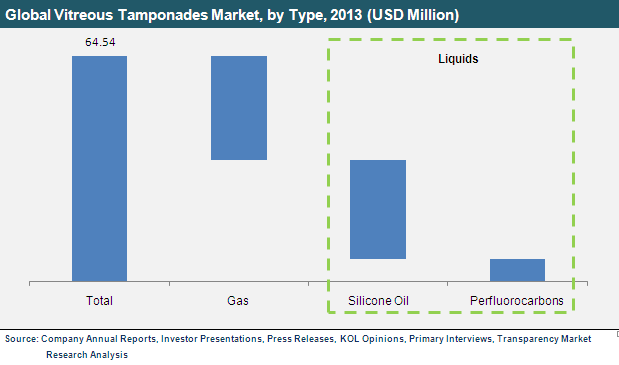 Furthermore, liquid tamponades are sub-segmented into perfluorocarbon liquid and silicone oil, of which the silicon oil segment will exhibit the fastest growth during the 2014-2020 forecast period. However, in recent years, the use of silicon oils has been related to the development of some adverse conditions such as glaucoma and eye inflammation. This is due to the tendency of silicone oils to emulsify and form bubbles inside the eye, which has necessitated the use of high-viscosity silicone oil, which dissuades emulsification.

Some of the key companies having a significant presence in the vitreous tamponades industry are Alcon Inc., Carl Zeiss Meditec AG, Fluoron GmbH, and Valeant Pharmaceuticals International Inc.