The prefilled syringes market features a fairly consolidated landscape with the top four players accounting for a combined share of more than 50.0% in the overall market in 2015, finds Transparency Market Research (TMR).  The leading companies are-Medtronic, Terumo Medical Corporation, Baxter International Inc., and Becton, Dickinson and Company. TMR observes that the market is intensely competitive and dynamic. The market remains consolidated in developed regions with the presence of numerous large players holding a substantial market share. Owing to the presence of several small and medium players in various emerging regions, the market is to a large extent fragmented in these regions.

The prefilled syringes market is projected to rise at a CAGR of 9.3% from 2016 to 2024. In terms of sales, the global prefilled syringes market was valued at US$3.5 bn in 2015 and is expected to reach US$7.9 bn by the end of the forecast period. In terms of consumption, the market is projected to rise at 9.0% CAGR during the same period. 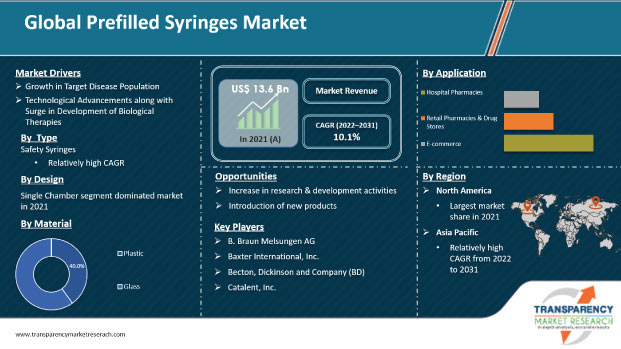 The extensive uptake of prefilled syringes among healthcare workers and doctors is driven by the ease of administration and other significant benefits. A notable benefit of using prefilled syringes is in the prevention of needlestick injuries. According to World Health Report 2002 by the WHO, a large number of healthcare workers—around 2 million-every year suffer from various infectious diseases, such as HIV/AIDS and Hepatitis B and C, due to needlestick injuries. Prefilled syringes have gained in prominence among clinicians since they reduce the chances of inadvertent needle sticks and fatal exposure to any toxic product due to extractables and leachables.

The prefilled syringes market is segmented based on: