The rapid increase in the number of injectable drugs to be approved recently has been a key contributor to the growth in demand for disposable syringes specifically, over other types of syringes. This is due to the growing number of patients afflicted with accidental needlestick injuries. Both factors thus work in tandem to create a staggering demand for disposable syringes and will continue to do so in the long term. 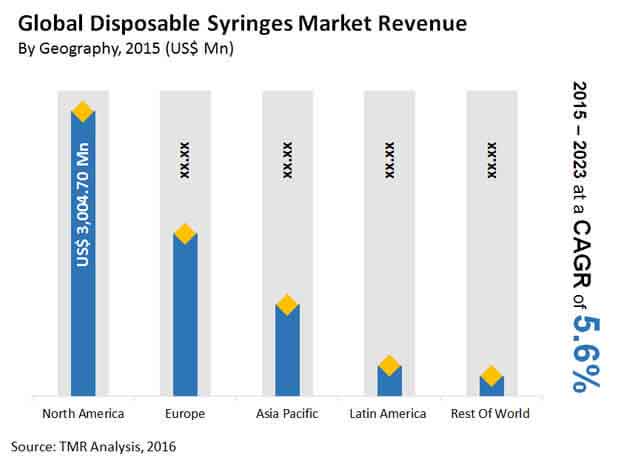 China and India are expected to be the two key lucrative avenues for disposable syringes players in the near future, owing to their high population densities and growth in healthcare expenditures. A large part of this growth in demand for disposable syringes is attributed to the increasing number of government and private initiatives for conducting immunization drives across the countries. Additionally, the higher interest shown by North American and European players in these regions is expected to add to the quality of disposable syringes available in the market, further increasing their consumption rates.

Key reasons for the high accelerated growth rate shown by safety syringes is the absence of any safety mechanisms in conventional ones. Safety syringes help protect patients from needlestick injuries and are just as accurate and easy to use as conventional disposable syringes.

This report on the disposable syringes market studies the current and future prospects of the market across the globe. Syringes have made possible the delivery of medicines via parenteral means such as intravascular and intramuscular. Disposable syringes have been preferred than re-usable syringes majorly due to low cost, accuracy, sterility, and ease of handling. The market report comprises an elaborate executive summary, which includes a market snapshot that provides information about various segments and sub-segments of the market. It also provides information and data analysis of the global disposable syringes market with respect to market segments based on the product type and their geographic analysis.

Based on the product type, the disposable syringes market has been segmented into: safety syringes and conventional syringes. Safety syringes have been further classified as automatic retractable syringes, manually retractable syringes, non-retractable syringes and auto-disable syringes. Conventional syringes comprise with needle and without needle. Each of the market segments have been extensively analyzed based on adoption rate, awareness, advantages, efficacy, revenue, and geographical coverage. The market size and forecast in terms of USD million for each segment has been provided for the period from 2013 to 2023. The report also provides the compound annual growth rate (CAGR %) for each market segment for the forecast period from 2015 to 2023, considering 2013 and 2014 as base years.

Geographically, disposable syringes market has been segmented into five major regions: North America, Europe, Asia Pacific, Latin America and Rest of the World. The market size and forecast for each of these regions has been provided for the period from 2013 to 2023, along with their respective CAGRs for the forecast period from 2015 to 2023, considering 2013 and 2014 as base years. The report also provides with market size and forecast for major countries in the respective regions. The research study also covers competitive scenario in the mentioned regions. A detailed qualitative analysis of factors responsible for driving and restraining the market growth and future opportunities has been provided in the market overview section. This section of the report also provides with market attractiveness analysis, Porter’s Five Forces analysis, and market share analysis by key players, thus presenting a thorough analysis of the overall competitive scenario in the global disposable syringes market.

The global disposable syringes market is segmented as follows: