According to WHO (World Health Organization), only 12.5 million blood donations are collected globally, and approximately half of these are collected in high-income countries, which is home to 19% of the world’s population. Limited number of healthy blood donors hinders the production of MAT kits & reagents which ultimately effects the growth of the market. Moreover, introduction of pyrogen test in different applications. Pyrogen test was introduced for pharmaceutical products such as drugs and immunological products. Presently, it is being used on medical devices, implants, purification of water, and food & beverages industries.

The report offers detailed segmentation of global monocyte activation tests market based on product type, source, application and end user. Among the product segment, reagents segment is poised to account for leading share of the global market during the forecast period from 2017 to 2025. Factors attributed to the higher share of the reagent segment in the global market include frequent replacements leading to increasing usage of reagents when compared to test kits. Monocyte activation tests kits segment is likely to register comparatively higher growth rate in terms of value in the global monocyte activation tests (MAT) market during the forecast period owing to continuous innovations in the product technologies by major market players. 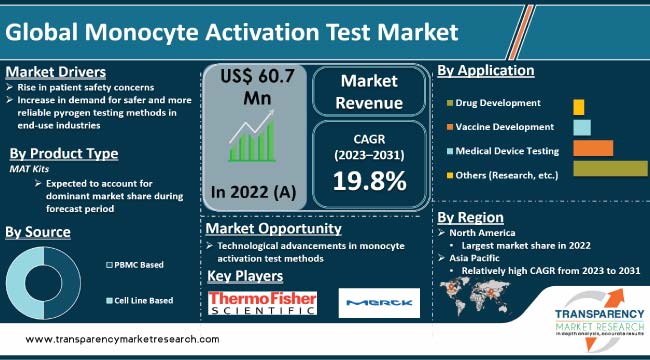 In terms of source, the monocyte activation tests market has been segmented into blood based, peripheral blood mononuclear cell (PBMC) based and cell line based. Blood based segment accounted for the largest market share in 2016. Blood-based MAT exhibits a natural human reaction to pyrogens and provides a better estimate of pyrogenic activity of preparations than the limulus amebocyte lysate (LAL) or rabbit pyrogen test (RPT). The MAT kit with a cell line is able to detect all human pyrogens and has an advantage of stability of the assay based on a cell line. Also, it does not depend on the blood donor.

By application, the monocyte activation tests market has been further classified into lipid parenteral, dialysis liquids, toxic/immune-modulatory drugs, blood products and medical devices. Medical devices segment accounted the largest market share in 2016 due to the increasing number of medical devices in market demands for the pyrogen test before approval in the market. Additionally, lipid parenteral products include vitamins, steroids, and hormones, many of which are applied intramuscularly using a lipidic carrier. These products are required to be tested for pyrogen before launch in the market. This is a key factor driving the segment. Toxic/immune-modulatory drugs is likely to expand at CAGR more than 15.0% from 2017 to 2025.

In terms of end-user, the monocyte activation tests market is segmented into pharmaceuticals industry, biotechnology industry, medical devices industry and others. Pharmaceutical industry segment accounted for the major share in 2016 accounting for a share of more than 30.0% in terms of revenue, while biotechnology industry is anticipated to grow at higher CAGR during the forecast period due to the increasing demand of pyrogen testing by biotechnology companies to determine the presence of bacterial toxins in the process. Moreover, pyrogen testing has been introduced into medical devices, implants, purification of water, and food & beverage industries. These increased application areas are increasing demand for MAT products.

Asia Pacific Region is Expected to Grow with the Highest Rate During the Forecast Period.

The report also provide profiles of leading players operating in global monocyte activation tests market include Merck KGaA, Thermo Fisher Scientific, Charles River Laboratories International, Inc., Sanquin, Microcoat Biotechnologie GmbH, Becton, Dickinson and Company, SOLVIAS AG, and Lonza Group. Innovation is a key strategic for the leading players, for instance, in March 2016, the Scientist magazine listed Merck’s CRISPR epigenetic activator among its ‘Top 10 Innovations of 2015’. This innovation was devised from the understanding that the life sciences research segment lacked an effective method for the activation of endogenous gene expression. Additionally expansion through merger and acquisition is followed by many players operating in this market. For example, in July 2015, Charles River Laboratories International, Inc. acquired Celsis International, Ltd., a leading provider of rapid testing systems for bacterial contamination. This addition to its product portfolio has expanded the company’s existing portfolio of microbial solutions.

The global monocyte activation tests market is segmented as given below: