Power Inductors to Suffice the Need for Better Connectivity of Devices

The recent trend of energy storage is reckoned as a measure of growth for power inductor market players. From merely being used as a communication module, the essentiality of smartphones has been mounting for numerous purposes, and with automation taking over manned tasks, the penetration of mobile devices will only heighten in the future. According to the GSM Association, 5G technology is expected to account for 1.2 Bn connections by 2025, which is projected to cover one-third of the world’s population. The availability of high-speed Internet connectivity and rising investments in the development of 5G technology will further boost the sales of electronic devices.

In addition to consumer electronics, the convergence of automotive and semiconductor industries paving the way for the development of futuristic vehicles - autonomous vehicle and electric vehicles - will remain a crucial revenue pocket for the power inductor industry. However, the high demand-to-supply ratio is likely to reflect on the prices of power inductors. 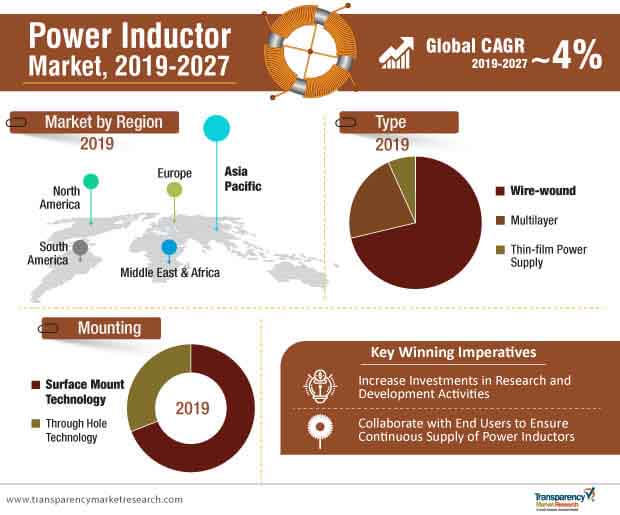 Given the mounting demand for power inductors ascending from the consumer electronics, healthcare, automotive, and telecommunication industries for energy storing requirements, product innovation is a key feature of the power inductor market. According to the trends analyzed by the Transparency Market Research (TMR) study, the adoption of surface mount technology is significantly higher than that of through hole technology, on account of the growing trend of miniaturization that requires the integration of power inductors directly on the surfaces of PCBs.

A majority of vendors of electronic goods outsource their production to Asia Pacific, owing to the availability of skilled labors at cheap cost, which attracts high foreign direct investments in the region. Improvements in healthcare facilities in the region are creating ample opportunities for the integration of power inductors in novel medical equipment. The intensifying race among automakers to electrify vehicles by 2030 further boosts the relevancy of the region, with a large number of players concentrated in Japan, China, and India. The leading position of Asia Pacific is followed by North America, as the region is home to some of the key players that heavily invest in R&D activities and push the envelope of the power inductor market.

The power inductor market can be characterized as moderately consolidated, with ~51% of the market share held by TDK Corporation, Vishay Intertechnology, Inc., and Murata Manufacturing Co., Ltd. Given the intense competition in the automotive, consumer electronics, and industrial landscapes, stakeholders of these industries have an ever-lasting demand for power inductors. For instance, in June 2019, TDK Corporation announced the launch of a novel power inductor with thin-film for mobile devices. Another player, Murata Manufacturing Co., Ltd, in 2018, developed power inductors for the development of advanced driver assistance systems (ADAS). In a nutshell, product innovation and expansion of production capacity are synonymous to consolidation in this landscape. 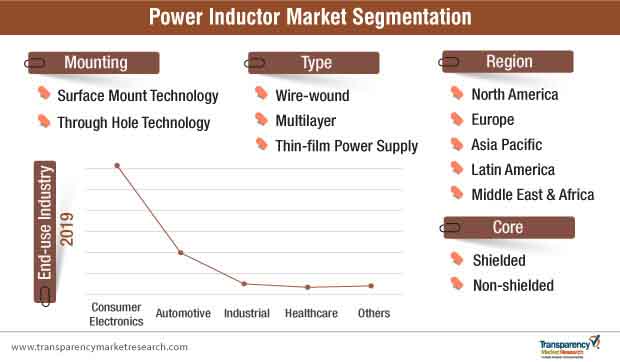 Stuck in a neck-to-neck competition with other brands? Request a custom report on “Power Inductor Market”

Analysts envisage that the power inductor market will grow at a sluggish CAGR of ~4% during 2019-2027, with the inability to cater to the rising demand undermining the true revenue-generating potential of the landscape. For market players, it could serve as an opportunity to enter into long-term collaborations with end users, and nurture their clientele base through the custom-development of power inductors. Another opportunity for market players can arise with the expansion of their production capacities in regions with high concentration of end-use industries. Strategy of market majors operating in the power inductor landscape include distribution-based partnerships and strategic collaborations with other players that help them gain better exposure in new markets.

[230 Pages Report] Transparency Market Research (TMR) conducted a detailed analysis to evaluate the growth trajectory of the power inductor market during the forecast period of 2019-2027. This comprehensive research report covers some crucial insights for market players that can assist them in maintaining their position and consolidate their market share.

The research report intends to offer rare and distinguished information apropos of the growth of the power inductor market, and brings to the fore the latent growth opportunities for market players. With the help of the insights found by this research, stakeholders operating in the power inductor market will gain an incisive outlook pertaining to its growth trajectory, which can help them in making sustainable strategies for their business growth.

This exclusive business study consists of an incisive outlook regarding the evolution of the power inductor market and changing dynamics during the course of the forecast period of 2019-2027. This exclusive business study provides information regarding the crucial drivers, threats, opportunities, and trends available in the power inductor market, in order to equip stakeholders with the most recent developments and market shifts.

The research report conducted by Transparency Market Research (TMR) analysts consists of a systematic methodology, employed with a view to cull key insights pertaining to the growth of the power inductor market during the forecast period of 2019-2027. Discussions with opinion leaders, market heads, vendors, distributors, industry experts, and key players were conducted in order to conduct primary research. In addition to this, our analysts also carried out a thorough secondary study of marketing collaterals, industry associations, company websites, and government statistics.