Plantar fasciitis has emerged as a persistent kind of repetitive strain injury that afflicts runners, hikers, and walkers, and also nearly everyone who stands for a living, such as cashiers for instance, especially on hard surfaces. The multi-factorial etiology of plantar fasciitis has led to a significant surge in the number of sufferers, while laying a firm base for the growth of companies that provide treatment for this condition. The steadily growing patient population has opened a window of opportunities for stakeholders who are widely adopting technologically-advanced products to alleviate heel pain in less period of time, and provide better relief even in worse cases. This continuing prevalence of plantar fasciitis has also paved the way for a range of customized foot orthotic insoles, specifically designed to alleviate pain while walking. With this heel pain increasing its hold on the growing geriatric population in particular, Transparency Market Research (TMR) decided to gauge the future growth prospects of the plantar fasciitis treatment market. 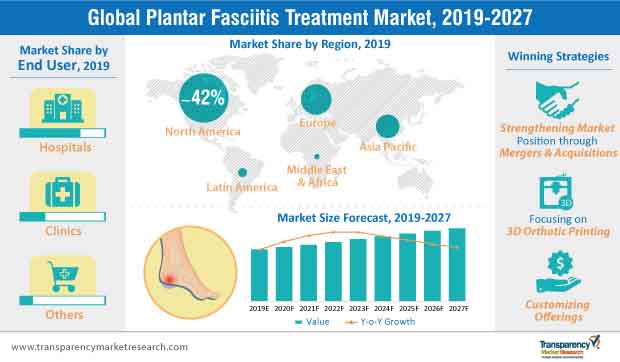 There are a wide range of treatments that form a promising ally for combating severe heel pain caused by plantar fasciitis, and thereby are widening the scope of growth for stakeholders. As per TMR’s estimations, the plantar fasciitis treatment market accounted for revenue worth ~ US$ 695 Mn in 2018. A large section of the working class stands for prolonged periods of time during their jobs, and suffers from body pain, specifically ankle or foot pain, which has been found to be the predominant cause of plantar fasciitis. This can be attributed to the fact that, the manufacturing sector continues to expand at an unprecedented rate, with ~ 22% of the global population engaged in this industry, who stand at one position for a long duration. In light of the growing incidences of heel pain caused by standing for prolonged periods of time, TMR analysts envisaged that the market is highly likely to take a leap of growth, expanding 1.4X between 2018 and 2027.

Though a sitting, inactive lifestyle can’t really be traced as the key cause behind plantar fasciitis, it definitely increases the risk of this condition. Moreover, the paradigm shift of individuals towards a sedentary lifestyle, coupled with their rapidly changing eating habits, has led to a significant increase in the number obesity cases. For that matter, a large part of the population has become prone to facing pressure on the joints and ankles, which can lead to plantar fasciitis. While plantar fasciitis continues to gain momentum as a common foot pain condition, an increased number of treatments are coming to the fore, with each one of them vying to suffice patient needs in a better way. As obese and geriatric populations fall close to the epicenter of plantar fasciitis, an increased number of people are falling prey to this condition.

Hospitals accounted for over half of the revenue generated by the plantar fasciitis treatment market, finds TMR’s analysis, which further indicates that the footfall will gain momentum in the years to come. In recent years, medication therapy has garnered limelight as the most widely adopted first line of therapy to manage the symptoms associated with plantar fasciitis, such as pain and inflammation. This can be attributed to the increasing number of medical centers, hospitals, and clinics that continue to prescribe one or the other form of painkillers, such as NSAIDS or steroids, to patients to fight plantar fasciitis.  It is pertinent to note that, though medication continues to maintain its position as a widely adopted treatment option, the demand for orthotics is set to grow, owing to the rise in awareness and its proven efficacy in managing plantar fasciitis.

The market for plantar fasciitis treatment continues to expand at a promising pace; however, there remains several determinates as potholes in the path leading to market growth. The volatile pricing of raw materials has been compelling orthotics manufacturers to keep a stock of prerequisites such as nylon, raw leather, shoe soles, EVA foam, and carbon composites, to avoid potential interruption in manufacturing caused by the shortfall of raw materials. However, the high risk of disparity in the potential future cost of the product could diminish the profit margins of manufacturer. Moreover, the storage of raw materials also pushes the inventory turnover ratio. Furthermore, as the leather industry continues to face backlash from organizations fighting against animal cruelty, the price point of this raw material continues to spike, limiting the profit margins of stakeholders.

How Stakeholders are Beating the Odds

The plantar fasciitis treatment market is highly fragmented, with a large number of small players operating individually at a regional as well as global level. As market competition continues to intensify, several stakeholders have placed their focus on mergers and acquisitions to solidify their position and secure gains. For instance, in 2017, Aetrex acquired Sols System to leverage its medical and consumer-grade 3D printed orthotics as well as software for the mass customization of footwear. The same year, Superfeet Worldwide, Inc. entered into a strategic partnership with HP to create a new machine - FitStation, which was designed to create a 3D scan of a customer’s foot shape, and an analysis of the way a wearer runs or walks.

Orthotics made its way into the medical devices industry long back, and has managed to appeal to practitioners and patients alike. Orthotics, as a treatment for plantar fasciitis, is only preceded by medication, and is likely to emerge as a key treatment option in the coming years, as manufacturers continue to place focus on advanced and diversified offerings to move ahead of their counterparts. Manufacturers are offering custom foot orthotics (specially made shoe inserts) designed to fit perfectly on the feet. As stakeholders put microscope focus on proper foot support and comfort, the market is likely to witness an increased production of customized orthotics that are in tune with the foot structure of the patient.

A bunch of changes are underway in the market for plantar fasciitis treatment, as advanced technology continues to make inroads into every aspect of medical device manufacturing, while opening a lucrative window for the development of cost-effective variants. The effectiveness of 3D printing in reducing cost, increasing orthotic efficacy, and paving the way for innovative designs currently remains blurred in the plantar fasciitis treatment market. Though there exists minimal advantages of additive manufacturing over subtractive options for manufacturing foot orthoses on a large industrial scale, it could witness greater adoption in the years to come. This can be attributed to the fact that, several companies have placed their focus on exploiting 3D printing technology by changing existing business models and foot orthoses production processes. For instance, in 2017, Wiivv Wearables Inc. raised US$ 4 million in Series A funding for its 3D printed insoles, and also purchased a custom footbed supplier – eSoles, to set the platform for the launch of its next phase of made-to-fit footwear.

Developed regions such as North America and Europe continue to lead the plantar fasciitis treatment market, owing to the growing focus of companies on leveraging technology in manufacturing processes and subsequent launches of new orthotic-based offerings. As per TMR’s analysis, North America accounted for ~ 42% market value share in 2018, and will continue to remain a trailblazer through to 2027. This steady growth can be attributed to the high adoption of advanced treatment approaches, and growing pool of plantar fasciitis patients in the region, which is primarily driven by an increase in the geriatric and obese populations that are more susceptible to this condition. Moreover, several leading market players, including Hanger, Inc. and Pfizer, Inc., have their headquarters in North America, a fact that continues to keep the lucrativeness of the region intact. 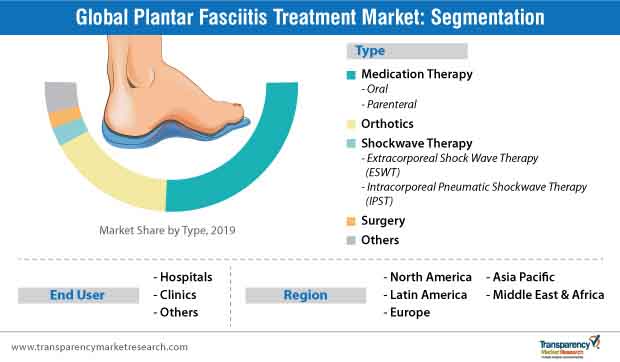 Plantar Fasciitis Could become the New Back Pain

Analysts of the report set their bets on a considerable increase in the plantar fasciitis treatment market, which is envisaged to expand at ~ 4% CAGR during 2019-2027, owing to a steady increase in foot pain incidences that are primarily driven by changing lifestyles, and growing obese and geriatric population. Companies that lay focus on streamlining their manufacturing operations of orthotics to increase their productivity are likely to witness higher growth in the years to come.

Increase in the preference for orthotics such as foot insoles and splints and medication therapy drives the growth and acceptance of plantar fasciitis treatment products. Medication therapies such as acetaminophen or nonsteroidal anti-inflammatory drugs in conjunction with stretching exercises and physical therapy have been established as first line of therapy for plantar fasciitis. Cortisone injections are used to treat more severe cases.

The report covers an exhaustive taxonomy of the plantar fasciitis treatment market and riveting insights on the competitive landscape. The report exhibits company profiles of the stakeholders that are vying to grow in the plantar fasciitis treatment market, wherein, a range of development and winning strategies adopted and leveraged by established players as well as market entrants have been presented in a comprehensive manner.

The report offers in-depth information about the plantar fasciitis treatment market, based on detailed research pertaining to the macro and microeconomic determinants that are playing a vital role in influencing the growth potential of the market. Information given in the report answers salient questions for present market players as well as the ones eying entry into the plantar fasciitis treatment market, to help them formulate smart strategies and take business-driving decisions.

The research methodology leveraged by the analysts for developing the plantar fasciitis treatment market report depends on exhaustive primary as well as secondary research. By delving deep into the industry-validated information that is obtained by relevant sources, analysts have mentioned incisive insights and accurate forecasts of the plantar fasciitis treatment market.

At part of the primary research, analysts conducted interviews with relevant stakeholders in order to gather information about key project objectives. During the secondary research phase, analysts gauged company annual reports and investor presentations. They also obtained data from the websites and press releases of leading market players.