Shock waves or shock wave therapy devices have been accepted in the management of wide range of musculoskeletal disorders in the last 20 years. Some of the orthopedic conditions where these devices have been used include plantar fasciitis, elbow tendinopathy, shoulder tendinopathy, Achilles tendinopathy, and patellar tendinopathy. Shock waves are used in generating eNOS (endothelial nitric oxide synthase) and VEGF (vascular endothelial growth factor), and finally stimulating bone growth. The growing clinical acceptance of non-invasive therapeutic intervention is one of the key trends spurring the growth of the shockwave therapy device market. Growing incidence of tendinopathies is boosting the market. In particular, extracorporeal shockwave therapy (ESWT) has gathered groundswell of attention of medical device owners invading this marketspace. Numerous studies have been done to assess the efficacy and safety of ESWT in tendonitis. Quite few of them have been conducted by researchers in Asia Pacific. However, there is certainly a paucity of randomized clinical trials in this direction. One key stimulator is the ineffectiveness of currentmotor improvement programs. Of note, the non-invasiveness, safety, and low-cost of shock wave therapy devices improve the revenue prospects of their manufacturers. ESWTs thus show promising results in different types of tendinopathy.

Manufacturers have been continuously aiming at design advances in the shock wave therapy devices to improve performance across all parameters. In the currently emerging Covid-19, which brought upheaval in economies across the world has also impacted the course of growth trajectory of the market. Governments have to change the regulations and rework on the policy framework to boost engines of growth. Medical manufacturing is one of them that has attracted their attention. In recent months, the uptick in demand as well as positive outlook of manufacturers have expanded the avenue for players in the shock wave therapy devices market. In particular, the horizon of the market is likely to expand due to the adoption of new business models and expedited regulatory approvals of new devices, to meet any surge in demand in the next few months.

Exposition of the global shock wave therapy device market can be attributed to increase in number of musculoskeletal disorders across the globe. The global shock wave therapy device market was valued at over US$ 91.6 Mn in 2016 and is projected to surpass US$ 139.9 Mn by 2025, expanding at a CAGR of over 5.0% from 2017 to 2025. The global market is expanding at a considerable pace due to rise in digitization for pain management practices, high incidences of orthopedic surgery, occurrence of kidney stone among geriatric population, erectile dysfunction in men, and surge in demand for analgesic free treatment procedure.

Shock wave therapy device is an administrative and clinical tool that helps improve the treatment efficiency of kidney stone. The lithotripsy is the most common treatment used to target and break the stone in kidney into fragments. This system is also known as extracorporeal shock wave lithotripsy. The nonsurgical technique uses high-energy shock waves to treat kidney stones. 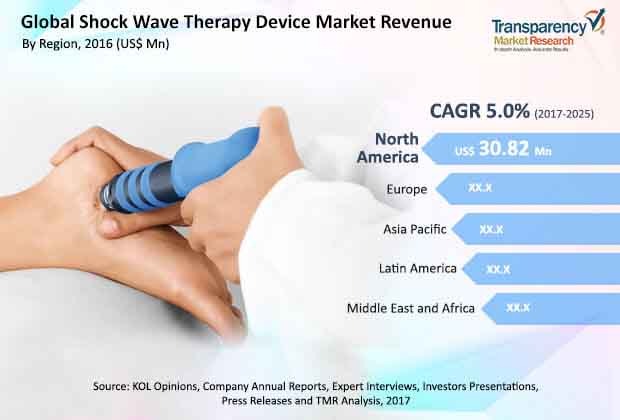 The shock wave therapy device market report comprises an elaborate executive summary, which includes market snapshot that provides information about various segments of the market. It also provides information and data analysis of the global market with respect to the segments based on modality, technology, application, end-user, and geography. A detailed qualitative analysis of drivers and restraints of the market and opportunities has been provided in the market overview section. Additionally, the section comprises major player’s product portfolio-based on technology & application to understand the competitive landscape in the market. This section of the report also provides market attractiveness analysis, by geography and market share analysis by key players, thus presenting a thorough analysis of the overall competitive scenario in the global shock wave therapy device market.

Based on end-user, the shock wave therapy device market has been segmented into four major categories: hospitals, clinics, rehab centers, and others. The shock wave therapy device are also segmented into portable shock wave device and fixed shock wave device based on the modality. The market segments has been extensively analyzed based on prevalence of diseases, available treatment, and geographical coverage. The market size and forecast in terms of US$ Mn for each segment have been provided for the period from 2015 to 2025. The report also provides the compound annual growth rate (CAGR %) for each market segment for the forecast period from 2017 to 2025, considering 2016 as the base year.

Geographically, the global shock wave therapy device market has been categorized into five major regions and key countries in the respective region: North America (the U.S., Canada), Europe (the U.K., Germany, Russia, France, Spain, Italy, Russia, and Rest of Europe), Asia Pacific (Japan, India, China, Australia & New Zealand, and Rest of Asia Pacific), Latin America (Brazil, Mexico, and Rest of Latin America) and Middle East & Africa (South Africa, GCC countries, Israel, and Rest of Middle East & Africa). The market size and forecast for each of these regions and the mentioned countries have been provided for the period from 2015 to 2025, along with their respective CAGRs for the forecast period from 2017 to 2025, considering 2016 as the base year. The research study also covers the competitive scenario in these regions.

Global shock wave therapy device market has been segmented as below: