An upgradation in the lifestyle of people together with augmented demand for skin lightening is likely to play an important role in propelling growth of the global pigmentation disorders treatment market in the years to come. In addition to that, availability of high disposable income and rise in the aging population is estimated to shoot up the demand for pigmentation disorders treatment.

Topical Treatment Procedures to Emerge as one of the Prominent Treatments

At present, topical treatment is dominating the global pigmentation disorders treatment market, thanks to the much better clinical outcomes in those patients who are affected with various kinds of pigmentation disorders. L-ascorbic acid, hydroquinone, and azelaic acid are some of the popular topical drugs available widely in the market.

There has been a growing prominence of chemical peels for the purpose of treatment of facial hyper-pigmentation disorders. In this procedure, chemical peels are dipped in chemicals and then are applied on face or on the targeted areas, hands, and neck to remove the dead skin cells. The removal of dead skin the triggers growth of new skin cells on the affected areas. 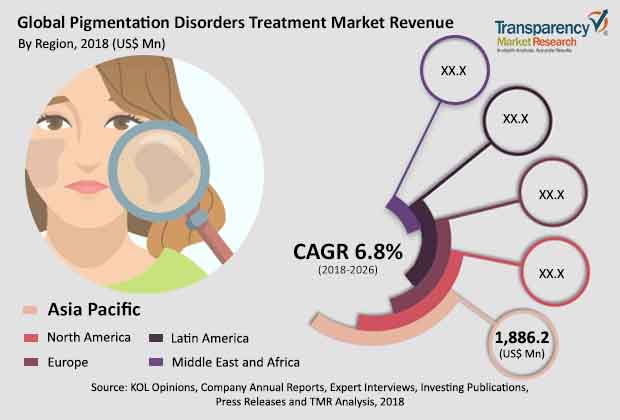 After stringent restructuring of regulations against dermo-cosmetic products and services, companies have started focussing on efficacy and quality with high investments in R&D. This has ultimately helped boost technological development and emergence of new products, services, and devices in the pigmentation disorder treatment market. The products and services have been moderated by regulatory bodies and have minimal side effects.

Opportunities for introducing new products, services, and devices are high as the market consists of established players and their brands. However, the market is still in search of highly efficient products and portable and technologically advanced devices. Safety and efficacy are major concerns in the pigmentation disorders treatment market. Therefore, introduction of such products presents a window of opportunity for new players to enter the market and establish themselves. The appreciation of regulatory compliance is a major factor that contributes to the success or failure of treatments, thus affecting sales. Galderma launched the triple combination to improve compliance of its key product, Tri-luma. Increased patient and provider awareness is also likely to help increase patient share of many marketed therapies during the forecast period.

The pigmentation disorder treatment market has been segmented based on treatment, disease indication, end-user, and region. In terms of treatment, the topical drugs segment is estimated to account for a prominent share of the market. An increasing number of patients with pigmentation disorders are visiting dermatologists, and topical drugs are being prescribed to these patients. With an existing unmet need for better treatment armamentarium for severe, recalcitrant patients and an estimated drug-treated population that is expected to double over the next decade, topical drugs is an attractive segment for drug developers. This is expected to fuel commercial interest in the development of tropical drugs.

Based on disease indication, the vitiligo and melasma segment constituted a major share of the market in 2017. The segment is likely to expand at a significant growth rate as compared to other disease indication segments during the forecast period. Globally, the prevalence of vitiligo and melasma varies. Women are far more likely to be affected by melisma than men, and both sexes are affected equally by vitiligo. In pigmentation, inadequate patient compliance still remains a significant unmet need. This single factor has hindered the ability of patients to achieve maximum treatment benefit, given the therapeutic options currently available, and has resulted in multiple failed treatment attempts.

This report analyzes the global pigmentation disorders treatment market in terms of its current and future scenario. Rise in investment in R&D of novel advanced technologies, decrease in social taboos regarding pigmentation, increase in prevalence of pigmentation-related disorders, and rise in awareness about skin rejuvenation and treatment options are likely to drive the expansion of the global market during the forecast period. Pigmentation therapies can be classified as topical drugs, microdermabrasion, chemical peels, phototherapy, and laser therapy. These therapies are available in hospitals and aesthetic clinics & dermatology centers.

This report on the global pigmentation disorders treatment market comprises an elaborate executive summary, including a market snapshot that provides information about various segments of the market. The report also provides information and data analysis of the global market with respect to its segments based on product, application, and geography. A detailed qualitative analysis of drivers, restraints, and opportunities of the market has been provided in the market overview section. In addition, the section comprises a competitive matrix and company profiles with a business overview to project the competitive landscape of the market. It also provides market attractiveness analysis in terms of geography and market share analysis by key players, thereby presenting a thorough analysis of the overall competitive scenario prevailing in the global pigmentation disorders treatment market.

In terms of geography, the global pigmentation disorders treatment market has been categorized into five major regions and key countries in these regions: North America (the U.S., Canada), Europe (the U.K., Germany, France, Italy, Spain, and Rest of Europe), Asia Pacific (China, India, Japan, Australia & New Zealand, and Rest of Asia Pacific), Latin America (Brazil, Mexico, and Rest of Latin America), and Middle East & Africa (GCC, South Africa, Israel, and Rest of Middle East & Africa). Market size and forecast for each of these regions and their key countries have been provided for the period of 2016 to 2026, along with their respective CAGR for the forecast period from 2018 to 2026, considering 2017 as the base year. This report also covers the competitive scenario of the market in these regions.

The global pigmentation disorders treatment market has been segmented as follows: