According to a new market research report published by Transparency Market Research, titled ‘Modular Robotics Market (Application: Residential, Commercial, and Industrial [Automotive, Electronics, Food & Beverages, Pharmaceutical, Rubber & Plastics, Metals & Machinery, and Others]; Component: Hardware, Software, and Services; and Robot Type: Cobots, Articulated Robots, SCARA, and Others) – Global Industry Analysis, Size, Share, Growth, Trends, and Forecast, 2019–2027,’ the global modular robotics market is expected to reach value of US$ 26,413.6 Mn by 2027 from US$ 6,876.9 Mn in 2019. The market is projected to expand at a CAGR of over 14% from 2019 to 2027. According to the report, the global market is expected to continue to be influenced by growing adoption of industrial automation across the world, strong presence of automotive and electronics industries, and ability of modular robots to change the configuration as per the manufacturer’s need or production line requirement. Asia Pacific is estimated to continue to lead the global market, with the market in the region expanding at a CAGR of above 13% during the forecast period. Prominent economies in Asia Pacific, such as China, Japan, India, and South Korea, are adopting modular robotics increasingly. 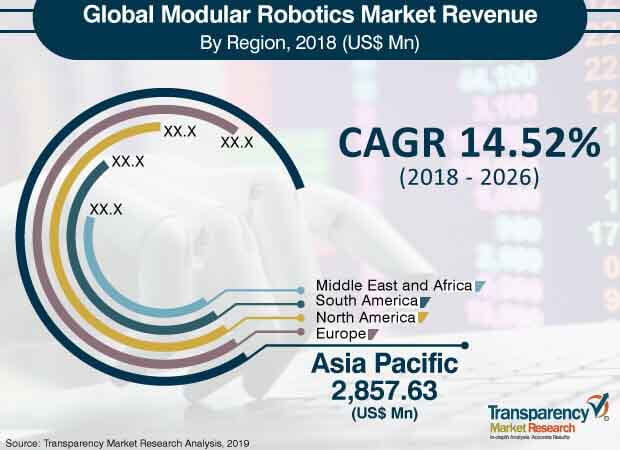 In terms of component, the global modular robotics market has been segmented into hardware, software, and services. Modular robotics consist of a large number of multiple hardware modules that can vary according to the given task. Furthermore, these connected multiple modules enable change in the size as well as shape of the robot as per the given task. Additionally, various end-effectors including clamps, grippers, and modules are provided by several companies, which can be attached to modular-type robots to perform a particular task. These end-effectors come with different specifications so as to cater to specific applications. Moreover, the hardware component segment is dominant, as modular robotics consist of several hardware components that can be applied interchangeably, which gives modular robotics a longer lifespan.

In terms of robot type, the modular robotics market has been divided into cobots, articulated robots, SCARA, and others. Cobots i.e. collaborative robots perform tasks in collaboration with workers in an industrial environment. Currently, the demand for collaborative modular robots is not significant; however, it is expected to increase a high rate during the forecast period. The significant growth rate can be attributed to various advantages offered by cobots. Significantly automated industries, such as automotive and electronics, which are prominent users of industrial robots, are developing collaborative robots alongside traditional industrial robots to perform certain tasks. Moreover, with the advancement in technologies pertaining to end-effectors such as grippers, controllers, and various robotic modules, adoption of collaborative robots is projected to increase across the global manufacturing industry in the next few years.

In terms of revenue, Asia Pacific accounts for a major share of the global market for modular robotics. Leading share of this region is primarily attributable to strong presence of well-established players and dominance of highly automated industries, such as automotive and electronics, across the region; especially in prominent economies such as China, Japan, South Korea, and India. These well-established players include Mitsubishi Electric Corporation, Kawasaki Heavy Industries, Ltd., and FANUC CORPORATION. Furthermore, presence of a prominent electronics industry, rising sales of local robot suppliers, and growing industrial automation across the region are factors driving the market in Asia Pacific. However, the market in Europe is projected to expand at a rapid pace during the forecast period, owing to significant adoption of industrial automation across automotive, food & beverages, and electronics industries in the region and the region being home to numerous well-established as well as emerging players including Universal Robots A/S, KUKA AG, and ABB. These players are innovating new modular robotics products and helping manufacturers in reducing the production cost.

The report includes profiles of well-established players operating in the global modular robotics market. These include Bender GmbH & Co. KG, ABB, Viper Innovations Ltd, Schneider Electric, Littelfuse, Inc., and HAKEL LTD. These players are focused on strategic collaborations and providing technologically advanced products to customers. In February 2019, Universal Robots A/S announced a partnership with Bharat Fritz Werner (BFW), a manufacturer of machine tools based in India. The partnership would carry the technology pertaining to collaborative robots on a modular platform to MSME shop floors. Moreover, it would enhance the production efficiency of BFW.

The global modular robotics market has been segmented as follows:

The report analyzes and forecasts the modular robotics market at the global and regional levels. The report consists of in-depth study of the market value chain, which gives a complete overview of the global market. Inclusion of Porter’s five forces and PESTEL analysis models helps in understanding the competition scenario of the market. The research study also covers market size (in terms of revenue), growth rate, and general attractiveness of the global modular robotics market.

The research study of the global modular robotics market provides detailed analysis of application, component, and robot type segments of the market. Based on application, the market has been divided into residential, commercial, and industrial. The industrial segment has been classified into automotive, electronics, food & beverages, pharmaceutical, rubber & plastics, metals & machinery, and others. The others segment comprises oil & gas and aerospace & defense. Based on component, the market has been divided into hardware, software, and services. In terms of robot type, the market has been segregated into cobots, articulated robots, SCARA, and others. The others segment includes Cartesian and cylindrical modular robots.

Primary research involves e-mail interactions, telephonic interviews, and face-to-face interviews conducted for each segment and sub-segment of the modular robotics market across different geographies. TMR conducts primary interviews on an ongoing basis with market participants and commentators in order to validate the data and analysis. Primary interviews provide firsthand information on market size, market trends, growth trends, competition landscape, and market outlook. These help in validation and strengthening of secondary research findings. They also help develop market understanding and expertise of the team of analysts.

The report includes profiles of well-established players operating in the global modular robotics market. These are FANUC CORPORATION, KUKA AG, Mitsubishi Electric Corporation, and Universal Robots A/S. These players are focused on providing technologically advanced products to their customers and meeting the risen demand. In January 2019, KUKA AG announced the launch of technologically advanced products that belong to its 'KR QUANTEC' series. The new robots would come with highly optimized performance and cost-effectiveness. These robots would also come with a modular design. They can be used across multiple industries such as automotive and health care.

The global modular robotics market has been segmented as follows: