In recent times, governments have also played a significant role in encouraging industrial automation so as to cater to the need of mass production for the ever increasing demand of the rising population.

Increases Flexibility and Quality in the Manufacturing Processes

Some of the benefits of industrial automation are mentioned below: 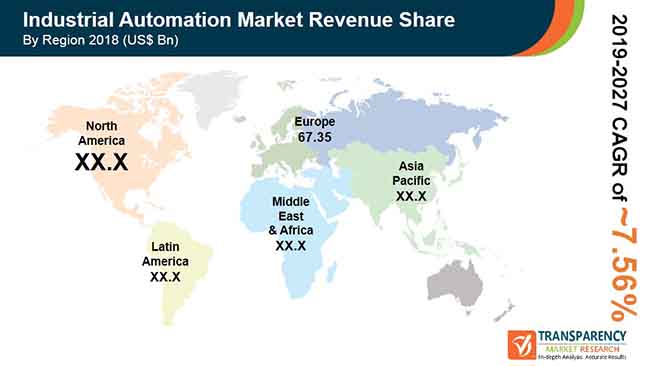 On the basis of automation type, the global market for industrial automation has been segmented into programmable logic control systems (PLC), manufacturing execution systems (MES), distributed control system (DCS), machine vision systems, human machine interface (HMI), product lifecycle management (PLM), supervisory control and data acquisition (SCADA), plan asset management, electronic control units, and computer numeric control routers (CNC). Amongst these, the demand for SCADA systems is expected to increase at a robust rate due to the need to maintain the integrity of data and information. On the basis of industry, the use of industrial automation spans across transportation and automotive, energy and power systems, mining and metals, food and beverages, chemicals, instruments and measurements, heavy industries, oil and gas, paper and pulp, and hydropower. The use of industrial automation has been rising across the automation industry over the past decade. This majorly owes to the increasing need for accelerating manufacturing activities in the automobile industry.

European Market to Expand at a Stellar Pace

Industrial automation is defined as the amalgamation of all machinery, processing systems, test facilities and factories which became automated because of great technological progress. The global market is poised to grow at a substantial rate during the forecast period because of the growing economy across the globe.

The largely used parts in this market are actuators, proximity sensors, flow meters, servo and DC motors, industrial communication systems, and robotic arms. Escalating frequency of factories is moving ahead along the automation path, and the incidence of automation devices such as PLCs, PCs, and PACs will become even more common in the coming years. While the opportunities for industrial automation branched from the developed economies of the west, it is presently taking industrial units of the Asia and South America regions by storm. Factor owners look out for factors such as quicker response time and faster output when they invest in factory automation.

The global Industrial Automation Market has been segmented as follows: