The global microwave oven market is prophesied to testify a propelling growth expected to ride on the demand for premium kitchen appliances driven by high-end technology. The improving spending capacity of consumers could bode well for the market. However, the analysts have forecasted a slack in demand due to the discouragement caused by the high energy consumption of microwave ovens. Nonetheless, the market is envisioned to counter this challenge with the help of innovation assisting to deliver results with less energy consumption. Furthermore, there could be a rising focus on research and development allowing consumers to have access to microwave ovens that help to cook new cuisines in less time. 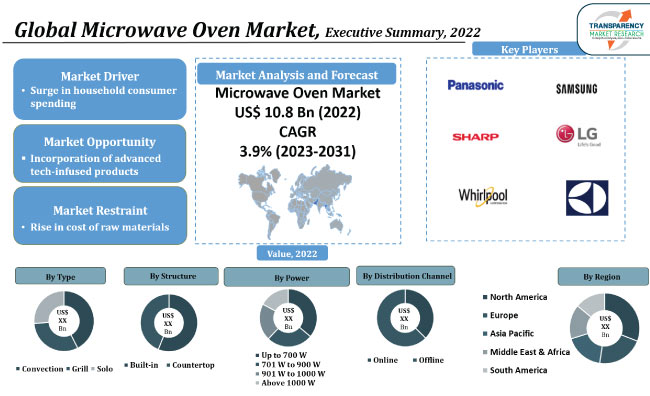 The world microwave oven market is prophesied to rake in a significant demand on the back of three key products, viz. convection, grill, and solo. Out of these, convection microwave oven could record a higher share in the market at a 5.2% CAGR. During the course of the forecast timeframe, this product type market could grow annually at a US$0.5 bn. This outright growth of the market is anticipated to be larger than any other product.

By end-use, household microwave oven could account for a significant share until the concluding forecast year due to its ability to help cook various food preparations in quick time. Technologies such as Easy Clean used by LG and Crispwave by KitchenAid have played a major role in improving the demand for convection microwave oven in household applications. Commercial applications of microwave oven could include preparing food in excessive quantities. As a result, commercial microwave ovens are required to be able to withstand longer operational hours, constant usage, and extreme electricity load.

By type of structure, the world microwave oven market is envisaged to see a classification into countertop and built-in. Besides offering an aesthetic appearance to the cooking area or kitchen, built-in microwave oven could be effortlessly installed in customized spaces, making it a viable option over its counterparts. Although built-in structures could cost an additional dime compared to countertop structures, their incomparable benefits in terms of ease of cooking and more counter space are projected to attract numerous consumers. Nevertheless, countertop microwave oven could be opted for its less installation cost and innovative designs occupying lesser space.

With a US$6.8 bn revenue predicted to be on the cards by 2022, North America could very well be a numero uno region of the international microwave oven market. It is observed to be an established market for microwave oven with plenty of commercial and household establishments already equipped with such appliances.

Next on the list of most lucrative markets could be Europe and Asia Pacific except Japan. The overall demand for microwave oven could increase in countries such as India and China due to the elevating inclination of consumers toward a high outlay on first-rate kitchen appliances. By 2022, Japan is foreseen to achieve 43 BPS in market share.

The increasing disposable income around the world and the rising influence are urging individuals to buy premium electrical appliances that offer convenience. This aspect may bring profitable growth prospects for the microwave oven market during the assessment period of 2017-2022.

The global microwave oven market is prognosticated to develop a solid foundation for a perpetual growth in the coming years. The occupied daily schedule of people and expanding size of the female working population could be among the top factors augmenting the growth of the market. Industry players keeping a tab on key trends of the market are expected to be aware of the fact that the demand for frozen and ready-to-eat foods could have a positive impact on that for microwave oven. As a result, changing food consumption preferences and lifestyles are predicted to up the demand in the market.

The report presented herewith is considered to be a complete study of the global microwave oven market with important factors explained to the core. The analysts have predicted the market size until 2022, including other statistics such as CAGR, in order to help readers gain a sound understanding of future market scenarios.

The world microwave oven market is anticipated to experience quite a few changes, however, on the optimistic side, due to changing consumer preferences and the influence of macroeconomic and socioeconomic factors. Some of the macroeconomic factors could include increasing consumer awareness, rise in disposable income, and enlarging size of the population. In this regard, the growth of the market is envisaged to be impacted favorably in the next few years.

A surging count of consumers, not just those belonging to the working category, could be improving the demand for microwave oven on account of heavy spending on kitchen appliances that ease the pressure of regular chores. This demand is expected to be further bolstered by the rising want for convenient and stylish appliances complementing the living standards of the buyers. However, the continued usage of conventional appliances in emerging nations could restrain the demand in the market. Nevertheless, the market growth is envisioned to rise above the challenges on the back of the elevating demand for smart and energy efficient kitchen appliances.

The international microwave oven market is prophesied to look up to North America for a staggering growth during the forecast period 2017–2022. The developed region could exhibit an attractive CAGR of 4.9% during the aforementioned forecast timeframe. By the concluding forecast year, the region could achieve a revenue valuation of US$6.8 bn, progressing from US$5.3 bn in 2017. There could be more regions such as Europe, Asia Pacific except Japan (APEJ), and the Middle East and Africa (MEA) and also Japan contributing toward the growth of the market.

By product, convection microwave oven could be a larger market expected to achieve close to a 48.9% share until the end of 2022. The analysts have also foreseen the market to be segregated into household and commercial microwave ovens as per type of end-use and built-in and countertop microwave ovens according to structure.