Lithium-ion battery is trending in the use of portable electronics and electric vehicles, owing to the rechargeability features. They are being used in military and aerospace applications recently. The rising awareness about renewable energy and strict government ordinances are leading to increased investment in renewable sources of energy. Renewable sources do not provide continuous energy, and thus, there is a need to store the energy to provide a constant power supply. The lithium-ion battery packs market is projected to witness a global rise due to advancements in technology and growth in demand for cost-effective solutions for the storage of renewable energy. 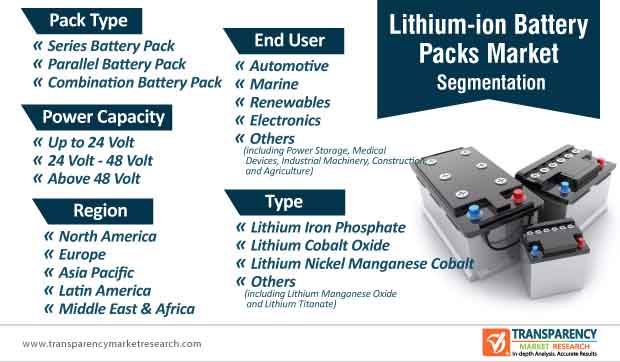 Use of Lithium-Ion Battery Packs in Electric Vehicles Globally

The usage of lithium-ion batteries has significantly increased in automobiles, marine, and consumer goods industries. These batteries can allow better energy density and voltage capacity compared to their alternatives. However, lithium-ion battery packs can cost much higher with a longer charge time. Thus, manufacturers need to focus on improving battery capacities and lifespan, reducing charging time and battery size making them cost-effective. Moreover, as the expense of replacement of lithium-ion batteries is high and regular replacement increases operational costs, manufacturers are now focusing on increasing the number of charging cycles of batteries. Due to rising number of innovations taking place in batteries and increasing market competition, the price of the lithium-ion battery pack is expected to decrease in the near future.

The supportive governmental regulations for electric vehicles are raising the demand for full and hybrid electric vehicles globally. The automotive segment of the lithium-ion battery packs market held a significant share that stood at 54.72% in 2020. The automotive segment is projected to generate opportunities valued over US$ 67 Bn during the forecast period. Furthermore, major factors such as the growing adoption of consumer electronics, improving research and development drives by various organizations and battery producers, and rising demand for plug-in vehicles are contributing toward the lithium-ion battery packs market growth, which is expected to exceed US$ 120.3 Bn by 2031, expanding at a CAGR of ~11% during the forecast period.

Cynical Impact of COVID-19 Leads to Decline in Energy Consumption

The leading manufacturers in the lithium-ion battery packs are expanding their presence in untouched regions. BYD, a China-based multinational company, accounted for a major share of the market due to its worldwide presence and broad product portfolio in the lithium-ion battery packs. Other prominent players in the market, including Toshiba Corporation, SAMSUNG SDI CO., LTD., Tesla, etc. are focusing on low-cost products and expanding the distribution channels, which is likely to result in global market growth. However, the ongoing COVID-19 pandemic is impacting the market with several factors such as limited distribution channels. The power industry is severely affected due to a drop in working of commercial and industrial sectors, as many nations are implementing a complete lockdown.

The electricity consumption in the U.S. dropped by a record 4.6% in 2020. The lockdown has shut various businesses, reducing the consumption of electricity. European nations such as France, Spain, and Italy are witnessing a decline in electricity demand. Moreover, since May 2020, the development of renewable energy projects, equipment supplies, policy implementation, including permitting, licensing, and auctions, and financing have been almost restored in major parts of the world. In addition, rapid production of vaccines with increased distribution and efforts taken by project developers and manufacturers to adjust to ongoing social distancing rules are driving the lithium-ion battery packs market. 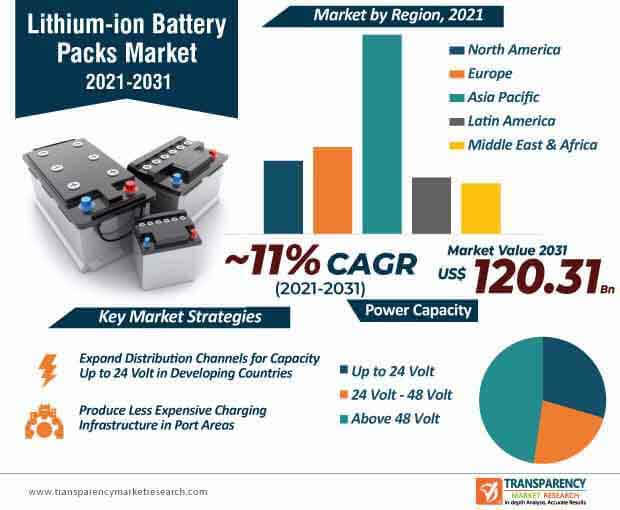 Stuck in a neck-to-neck competition with other brands? Request a custom report on Lithium-ion Battery Packs Market

The lithium-ion battery packs market is rapidly replacing Nickel-Cadmium (NiCad) rechargeable batteries due to stringent government regulations and increased environmental awareness of consumers. The rise in the demand for lithium-ion battery in electric vehicles (EVs) and grid storage due to its high-energy density solutions and lighter weight is anticipated to fuel the production and sales of lithium-ion battery packs during the projected period. However, a lack of charging infrastructure in port areas in all major parts of the world may hinder growth rate of the market. The cost of charging infrastructure and the price of transporting electricity from a local grid to a port terminal range are currently very high. Nevertheless, advancements in technological research and development are ensuring increase in charging infrastructure, helping to overcome the restraint during the forecast period.

This study covers a detailed segmentation of the lithium-ion battery packs market, along with key information and a competitive outlook. The report mentions the company profiles of key players that are currently dominating the lithium-ion battery packs market, wherein various development, expansion, and winning strategies practiced and executed by leading players have been presented in detail.

The report provides detailed information about the global lithium-ion battery packs market on the basis of comprehensive research on various factors that are playing a key role in accelerating the market growth. Information mentioned in the report answers path-breaking questions for companies that are currently operating in the market and are looking for innovative methods to create a unique benchmark in the global lithium-ion battery packs market so as to help them design successful strategies and make target-driven decisions.

The research methodology adopted by analysts for compiling the report on the global lithium-ion battery packs market is based on detailed primary as well as secondary research. With the help of in-depth insights of the market-affiliated information obtained and legitimated by market-admissible resources, analysts have offered riveting observations and authentic forecasts of the global lithium-ion battery packs market.

During the primary research phase, analysts have interviewed market stakeholders, investors, brand managers, vice presidents, and sales and marketing managers. Based on the data obtained through interviews of genuine sources, analysts have emphasized the changing scenario of the global lithium-ion battery packs market.