The BFS or blow-fill-seal process refers to the simple combination of an automated seal, fill, and form packaging sequence into one single machine. Plastic containers are filled and blow-molded with liquid product and sealed in one ongoing operation under aseptic processing conditions. The Latin America blow fill seal (BFS) technology market is estimated to be driven by augmented use of the technology in the pharmaceutical sector.

In this manufacturing technology, large (over 500 mL) and small (0.1 mL) volume of liquid filled containers are produced. This technique finds augmented utilization in the pharmaceutical sector to fill up parental preparation with minimum intervention of people.

Demand to Rise with the Growth of the Pharmaceutical Industry

The Latin America blow fill seal (BFS) technology market is estimated to witness considerable growth in the years to come owing to the growing pharmaceutical sector in the region. This blow fill seal technology is considered as an improved form of aseptic processing by many of the medicinal regulatory agencies such as FDA in the US in the packaging of pharmaceutical and healthcare products.

Blow fill seal (BFS) technology is used in filling of

On the other hand, high manufacturing cost is estimated to be one of the main factors that are restricting the expansion of the Latin America blow fill seal (BFS) technology market.

Thanks to the rising demand for pharmaceutical products that are manufactured using aseptic technology, the market for blow fill seal (BFS) technology in Latin Africa has been displaying a substantial rise in its size and valuation. Over the forthcoming years, this market is expected to be greatly influenced by several market trends, such as the advent of co-extrusion and blow fill insert seal technologies.

The leading players operating in this market are focusing aggressively on improvements in the production process in order to minimize the generation of non-viable particulate matter, which is likely to support the growth of this market substantially in the near future. The opportunity in this market is estimated to increase at a CAGR of 6.40% between 2016 and 2024, rising from US$205.5 mn in 2016 to a value of US$337.8 mn by the end of 2024. 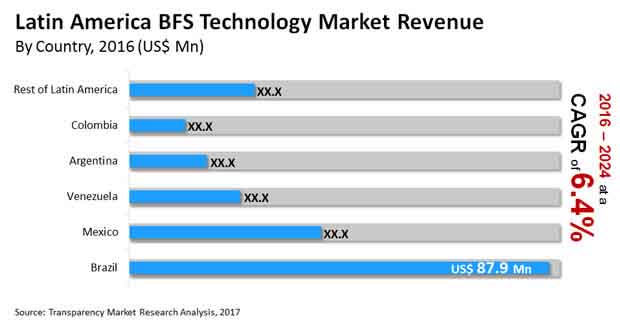 Polyethylene (PE), polypropylene (PP), and several other materials, such as ethylene vinyl alcohol (EVOH) are the key components required for the production of blow fill seal. With a share of 62.4%, the PE segment led this Latin American market in 2016 and is expected to continue to rise significantly over the next few years. Due to its low gas and water permeability, PE does not interfere with the drug. This factor is expected to fuel the growth of this segment in the years to come. Among all PE materials, LDPE is reporting a higher demand due to its excellent resistance to acid and bases and non reactivity at room temperature. HDPE is also projected to witness increased demand over the years to come, thanks to its high strength to density ratio, resulting in less spillage occurrences.

The pharmaceuticals, food and beverages, and the cosmetics and personal care industries have emerged as the key end users of BFS technology in Latin America. The products available in the Latin America market for BFS technology is primarily utilized in the pharmaceutical industry, which acquired a demand share of 98.4% in 2015. Researchers expect this scenario to remain so over the next few years, thanks to the growing need for user-friendly and flexible container designs among consumers. Among others, the food and beverages industry is poised to be the next lucrative end-use segment for BFS product manufacturers in the near future. The rising demand for sports and nutritional drinks is anticipated to fuel the uptake of BFS technology in the food and beverages industry in this region.

Brazil to Continue on Top

In terms of geography, the Latin America market for BFS technology reports its presence across Brazil, Argentina, Mexico, Venezuela, Colombia, and the Rest of Latin America. In 2016, Brazil held a share of nearly 43% in the overall market, registering its dominance. Researchers project this domestic market to remain on the top over the next few years, thanks to the significant rise in its pharmaceutical sector. Mexico, which stood second in the overall market in 2015, is also estimated to witness high growth in its BFS market in the coming years due to a relatively stable economy and the growing trade relations with the U.S.

The report begins with an overview of the Latin America BFS technology market, evaluating market performance in terms of revenue, followed by TMR’s analysis of key trends, drivers, and restraints witnessed in the Latin America market. Impact analysis of the key growth drivers and restraints based on the weighted average model is also included in the report. To compute the market size, in-depth secondary research is done. Data points such as regional splits and market split by material type, and end use has been assimilated to arrive at appropriate market estimates. The report comprises the forecast of the Latin America revenue generated by the sales of flexible packaging market.

TMR triangulates the data via different analysis based on supply side, demand side as well as the dynamics of flexible packaging market. It not only conduct forecasts in terms of value, but also evaluate the market on the basis of essential parameters, such as Year-on-Year (Y-o-Y) growth. This helps providers to recognize the future opportunities as well predictability of the market.

Another vital feature of this report is the analysis of the BFS technology market by corresponding revenue forecast in terms of absolute dollar opportunity. This is traditionally overlooked while forecasting the market. However, absolute dollar opportunity is critical in assessing the level of opportunity that a provider can look to achieve as well as to identify potential resources from a sales perspective of the Latin America BFS technology market.

To understand key segments in terms of their growth and performance in the BFS technology market, Transparency Market Research has developed a market attractiveness index. The resulting index should help providers identify existing market opportunities in the Latin America BFS technology market.

The Latin America market for BFS technology is segmented into: