Digitalization has been transmuting the way people approach printing materials, and several reports show that it is not a favorable approach for the global inks market. According to a report published by Transparency Market Research (TMR), the growth of the inks market is anticipated to remain sluggish during the forecast period, as masses are seen adopting digital inks and media over the water and solvent-based ones.

Also, the negative impact of solvent based inks posed by high VOC emissions has led to legislation on the permissible limits of these inks, which could instigate a shift of end users from solvent-based inks to other forms; however, digital ink will remain highly preferable. On the contrary, the demand for inks from traditional applications such as tattooing is projected to remain steady, which could dwindle the impact of critical challenges that have been limiting the growth of the inks market. 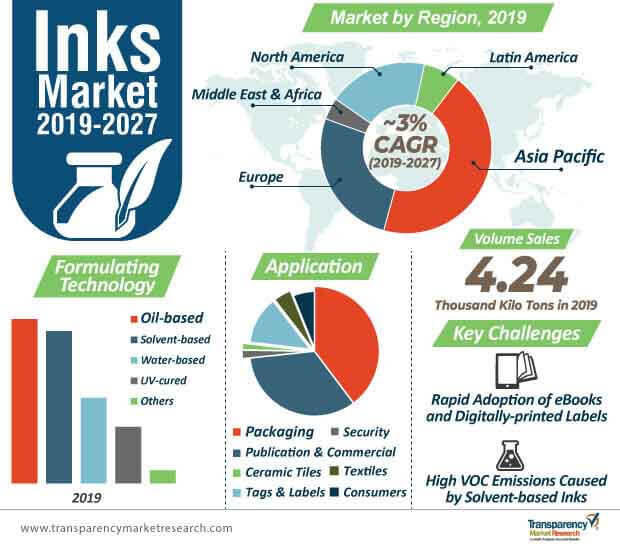 Manufacturers Move the Needle towards Development of UV-curable Inks

Analysts of TMR’s study on the inks market find that, partnerships with the market players in the packaging industry can turn into a growth-hack strategy, given the high-value share contributed by this industry. According to our research, in 2019, the global packaging industry will invest ~US$ 6.4 Bn in the inks market for printing labels. However, some manufacturers may show reluctance toward adoption, given the strict scrutiny of central authorities towards unsustainable packaging products.

To continue gaining revenue from the packaging industry, players in the inks market are seen extending their R&D activities beyond their current approach of production towards the development of VOC-free inks. Besides this, the governments of numerous countries are also participating in the development of an environment-friendly inks landscape. For instance, the European Union (EU) has announced increased funding for the Ecopaint Bio-based Formulations (ECOBIOFOR) project, which works for the development of sustainable paints, coatings, and inks, and offers green solutions to end-use industries.

Currently, the development of UV-curable inks has been aiding inks market players in aligning with environmental norms, and offers high productivity in a stipulated time with a significant reduction in pollution, energy consumption, and waste. Since UV-curing inks contain no solvents that can evaporate, no environmental pollutants are emitted, which makes them ideal for use in the packaging industry.

The inks market lacks the dominance of a single player that could push the envelope of the entire industry; however, diversified players from small-, medium-, and large-scale businesses collectively account for propelling the steady movement of the inks market.

Since arriving at the price-point of inks decided by market players could become a pain-point for end users, new entrants leverage sales opportunities by diversifying their portfolios with low-cost products. As these players lack a global distribution chain, they tend to produce less-VOC-emitting or VOC-free inks to establish their brand and compete with global players. 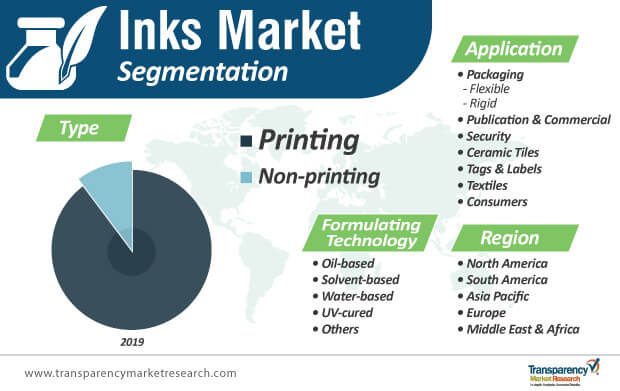 Looking for Regional Analysis or Competitive Landscape in Inks Market, ask for a customized report

Authors of the report opine that the inks market will grow at a pedestrian CAGR of ~3% during 2019-2027. Adherence to environmental guidelines will be unavoidable for market players, as the threat of end-use industries scrambling towards digital alternatives of inks is likely to encourage the green movement.

Asia Pacific is projected to remain a leading force in the global inks market during the forecast period, given the presence of cash-oriented economies, which drives the mass adoption of inks in the security paper sector. In addition, the popularity of tattoos as a means of self-expression among the millennial demography is projected to upkeep the demand for inks from the non-printing industry in the region.

What are Key Growth Drivers of the Inks Market?

What are Major Challenges for the Inks Market?

In December 2017, Flint Group acquired Eston Chimica SRL, a manufacturer of water-based inks for flexographic and gravure applications, based in Padova, Italy. The acquisition follows Flint Group’s strategy to expand through strategic acquisition

Key Queries Addressed in the Report

The first section in the TMR report on the inks market begins with a premise that includes the report scope, market segmentation, and research highlights. This is followed by the executive summary that emphasizes the inks market aspects covered in the study. This section provides a brief understanding of the market elements, and enables readers to understand the aspects covered in the study. The report also includes market dynamics that offer an understanding of the market drivers, restraints, and opportunities.

The next section includes an extensive segmentation analysis of the inks market. This evaluation includes the division of the inks market segments based on type, formulating technology, application, and region. Furthermore, an analysis of these key segments, year-on-year growth projections, and basis point share analysis are included in the report. These help readers identify promising market growth areas.

The TMR study on the inks market offers an assessment of the geographical landscape of the market. Regional study helps market competitors make important decisions pertaining to their business. Individualized, country-wise, and segment-wise analysis pertaining to individual regions helps readers decipher the potential of the market in various geographies. Supported by year-on-year growth projections and global value and volume share, this section is a vital part of the report.

The study on the inks market offers a holistic competitive value judgment, with details of leading and emerging market players. The dashboard view of competitors in the inks market report allows readers to understand their business and strategies, along with their performance.