The prevalence of rare diseases has surged in recent years, as the tracking of their incidence has improved around the world in the past few decades. This is particularly significant for genetic diseases, as standardized screenings and tests are few, as such, making it hard to determine how many people are affected by them. Hereditary angioedema, also known as HAE, has been in the spotlight, as government and non-government organizations around the world work to raise public awareness to increase diagnosis and improve treatment. According to a report by Transparency Market Research on the global hereditary angioedema treatment market, in 2018, the treatment for HAE was sought mainly in North America, making it the largest regional market, accounting for over three-fourth of the global market share. This can be attributed not only to enhanced data tracking, but also better healthcare infrastructure, which has led to the better availability of specialty HAE products in the region.

Although the North America market is expected to grow at a healthy pace over the forecast years, it is expected to yield market share of ~4% to Europe and the Rest of the World, as public awareness about the disease rises in other parts of the world, shaping the further evolution of the hereditary angioedema treatment market. 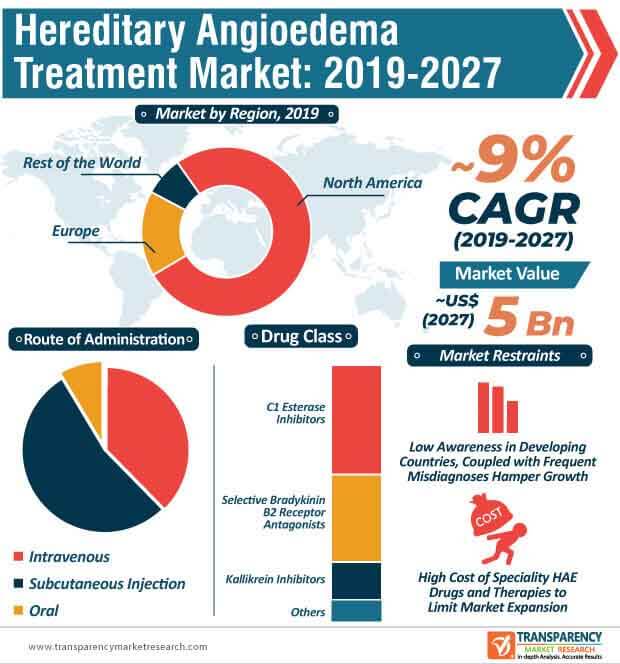 The intravenous route of medicine administration has been the method of choice for drugs used in the treatment of hereditary angioedema. This can be attributed to the fact that, conventional prophylactic drugs have traditionally been administered intravenously, and this method has occupied a significant share of the global hereditary angioedema treatment market in the last few years. However, with the development of drugs that can be administered orally and by subcutaneous injection, intravenous drugs are expected to lose popularity in the foreseeable future.

The phenomenal growth of subcutaneous injections as a mode of drug administration can be attributed to the demand for ease-of-usage for patients, which has had an instrumental impact on the growth of this segment. Where in 2018 subcutaneous injections accounted for close to half of the total market, by the end of the forecast period in 2027, this segment is anticipated to grow to occupy ~65% of the share.

In recent years, there has been an impressive amount of research being done for the development of drugs for hereditary angioedema treatment. This has included not just drugs to control the symptoms of the illness, but also prophylactic treatment for HAE attacks. There are currently several drugs that are in various stages of approval for the long-term prophylactic treatment of HAE in children and adults. For instance, in May 2019, BioCryst Pharmaceuticals announced that its drug - BCX7353, for the prevention of (HAE) attacks, has achieved its primary endpoint for both dose levels. 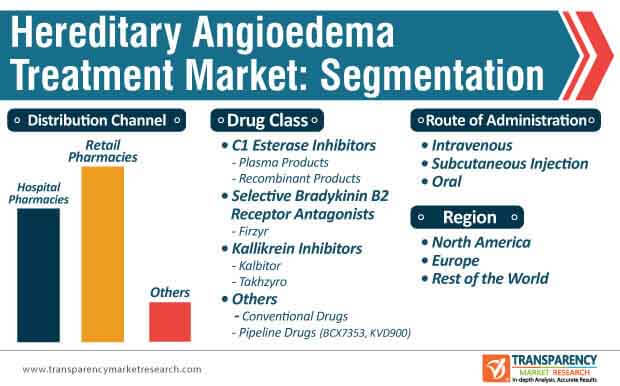 Stuck in a neck-to-neck competition with other brands? Request a custom report on “Negatively Impact Market”

The global hereditary angioedema treatment market is set to grow at a healthy pace during the forecast period, due to the gradually increasing awareness and diagnoses of rare genetic diseases, and product innovation for their treatment. According to analysts at Transparency Market Research, as newer and better classes of drugs are being made for a spectrum of symptoms and severity, players targeting their R&D toward the prophylactic treatment of hereditary angioedema attacks are likely to maximize their gains in the near future.

Subcutaneous injections are growing in popularity due to patient convenience and ease, being aided by the launch of innovative new products that employ this route of administration. Players in the market taking advantage of this preference in the development of medication for HAE are likely to gain a competitive edge in the hereditary angioedema treatment market.

The regional market in North America is expected to expand robustly, due to the large number of reported cases, coupled with a well-established healthcare infrastructure. The future is set to be lucrative for manufacturers focusing on ameliorating their product offerings to include personalized and speciality drugs for the treatment of hereditary angioedema.

The report includes an elaborate executive summary, along with a snapshot of the growth behavior of various segments and sub-segments included in the scope of the study. Furthermore, the report sheds light on changing competitive dynamics in the global hereditary angioedema treatment market. These indices serve as valuable tools for existing market players as well as for entities interested in participating in the global hereditary angioedema treatment market.

The comprehensive report on the global hereditary angioedema treatment market begins with an overview of the market, followed by the scope and objectives of this study. Following this, the report provides detailed explanation of the objectives behind this study, pipeline analysis, orphan drug exclusivity scenario, key mergers & acquisitions, and disease overview.

For reading comprehensibility, the report has been compiled in a chapter-wise layout, with each section divided into small sections. The entire report comprises an exhaustive collection of graphs and tables appropriately interspersed in the entire compilation. Pictorial representation of actual and projected values of key segments is visually appealing to readers. This also allows comparison of the market shares of key segments in the past and at the end of the forecast period.