Glaucoma is considered to be the second most cause for blindness around the world, according to WHO. This leading reason for preventable blindness is associated with chronic progressive optic neuropathy, which leads to irreversible vision loss via damage to optic nerve. No treatments currently exist for directly preventing glaucoma, however several commercially available therapies concentrate on curtailing elevated intraocular pressure, which is a known risk factor responsible for the development and progression of glaucoma.

Glaucoma Treatment Market to Enter a New Phase of Expansion

Demand for glaucoma treatment is expected to be significantly driven by the advent of fixed-dose combination products that combine drugs from various classes. The market for glaucoma treatment will enter a new phase of expansion, with the introduction of first-in-class, innovative drugs such as trabodenoson, Vesneo, and Roclatan/Rhopressa. Prevalence of glaucoma is increasing in parallel with the rise in geriatric population worldwide, as older individuals are relatively more prone to developing glaucoma. In addition, mounting number of people with diabetes and those with family history of glaucoma also contribute to this disease prevalence significantly. Governments and healthcare institutions are increasingly taking initiatives to spread the awareness about treatment options available for patients with glaucoma.

Product development strategies in the recent past have been impressive with surgery options, with several effective additions such as photodynamic therapy and laser therapy. However, excellent efficiency and efficacy of currently available drugs, particularly carbonic anhydrase inhibitors and prostaglandin analogs, have set barriers to the development of new therapy options. 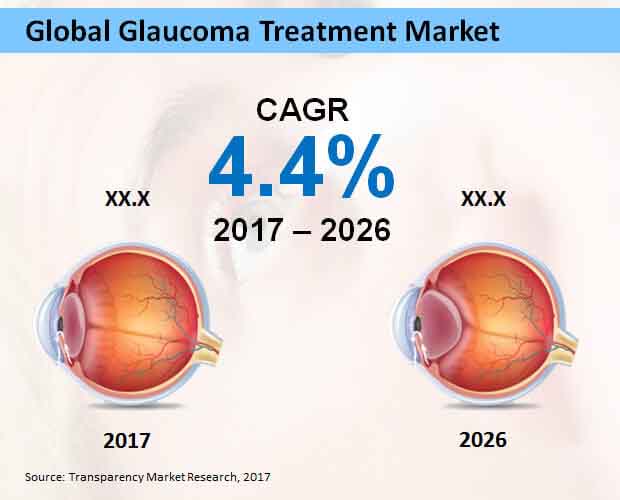 A new exhaustive report collated by Transparency Market Research envisages an average growth for the global glaucoma treatment market in the period between 2017 and 2026.More than US$ 3,300 revenues are expected to be gained from treatment of glaucoma across the globe by 2026-end.

Incidences of glaucoma in North American countries are rising significantly, with the surge in older population in the region, thereby creating high demand for glaucoma drugs. Demand for glaucoma drugs in the region is fulfilled owing to the presence of several pharmaceutical giants and heavy investments in pharmaceutical sector. In addition, the economic vigour and enormous investments in healthcare sector in North America have meant that the region will remain the leading revenue contributor to the global glaucoma treatment market. Europe and Asia-Pacific excluding Japan (APEJ) are also expected to be major revenue contributors to the market during the forecast period.

Key Research Findings from the Report

The global market for glaucoma treatment is crowded with branded drugs coupled with surging number of generics, which in turn is creating significant competition in the market. This has further set limits to introduction of novel therapies, along with several products being due to lose exclusivity. Late-stage pipeline for glaucoma, however, holds promise for treatments imparting novel mechanisms of action, thereby creating lucrative growth opportunities for the market players. Key players underpinning growth of the global glaucoma treatment market include Novartis AG, Allergan, Merck & Co., Inc., Akorn, Inc., Bausch & Lomb Incorporated, Teva Pharmaceuticals, Pfizer, Santen, Aerie Pharmaceuticals, and Inotek Pharmaceuticals.

The report delivers an exhaustive synopsis of global glaucoma treatment market, with its first chapter titled “executive summary” that elucidates key nodes influencing the market growth. This chapter also illuminates influences that the market dynamics are likely to have on its growth in the forecast period. The report also submits figures related to CAGRs from historical as well as forecast point of view. A chapter titled “overview” in the report follows the executive summary, providing a clear picture of glaucoma treatment market’s scope to readers of the report. The overview imparts a concise market introduction trailed by the definition of “glaucoma treatment”. Chapters succeeding the overview elaborate imperative dynamics such as growth drivers, limitations and prospects observed in the market throughout the forecast period. These chapters also inundate in-depth insights associated with the global economy, bottom line of enterprises, and fiscal stimulus.

This analytical research study on the global market for glaucoma treatment is a complete package, including intelligence on active players underpinning the market growth. In this last chapter, which elucidates the market’s current and future competitive scenario, strategies being implemented by the players, along with information on their product overview, company overview, key developments, key financials, and SWOT analysis is rendered exhaustively by the report. Additionally, region-wide reach of these market players, future expansion plans, revenues, mergers & acquisition activities, and market shares have been elaborated in detail in this chapter. An intensity map employed in the report profiles the market players that are located across geographies.

Credibility of researched statistics & data has been backed by a unique research methodology utilized by TMR’s analysts, for ensuring higher accuracy. This research report on global glaucoma treatment market will assist its readers to gain detailed insights about many different aspects guiding the market across the regional segments comprised in the report. Readers of this report can further slate effective strategies for foraying the vital revenue pockets as well as gaining benefits over intensifying market competition. Information issued in the report is scrutinized as well as monitored by TMR’s industry experts. The figures and numbers that are offered in this report have been validated by analysts for facilitating the report readers in making strategic decisions.

A segmentation analysis delivered in the report submits insights on the global market for glaucoma treatment. The market is characterized based on sales channel, indication, product type, and region. Analyses on the Y-o-Y growth comparison, market share comparison, and the revenue comparison in accordance with relevant market numbers has been delivered in this chapter. The global market for glaucoma treatment has been divided regionally into Asia-Pacific excluding Japan, Europe, Middle East & Africa, Japan, Latin America, and North America.