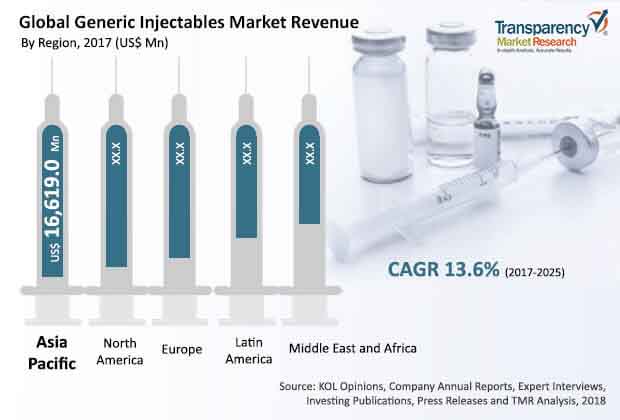 Based on route of administration, the global generic injectables market has been divided into intravenous, intramuscular, subcutaneous, and others. The intravenous segment held a significant share of the market in 2016. However, the intramuscular and subcutaneous segments are expected to expand at a faster pace driven by high demand for self-administered injectables and prefilled syringes.

North America is expected to account for the second largest share of the global generic injectables market by 2025 due to expected new abbreviated new drug application (ANDA) approvals by 2020, patent loss of blockbuster biological drugs prescribed in key therapeutic areas such as oncology, and increasing shortages of the generic injectables the U.S. Europe is a favorable market for biosimilar product launches due to well-established regulations. Moreover, government initiatives to reduce the burden of health care cost by supporting the use of generic medicines is making the market expand at a considerable pace.

This comprehensive report by Transparency Market Research analyzes the global generic injectables market for the period between 2017 and 2025. An in-depth and unbiased market assessment has been made, which offers an in-depth and accurate analysis. Market projections have been offered in terms of value (US$ Mn). Stakeholders of this report include companies and intermediaries engaged in manufacturing and distribution of generic injectable products as well as new entrants planning to enter this market.

In terms of geography, the global generic injectables market has been segmented into North America, Europe, Asia Pacific, Latin America, and Middle East & Africa. Moreover, analysis for major countries comprising the U.S., Canada, Germany, France, the U.K., Italy, Spain, Russia, China, Japan, India, Australia & New Zealand, Brazil, Mexico, South Africa, Israel, and GCC Countries has also been provided in the report. A detailed qualitative analysis of the factors responsible for driving and restraining the generic injectables market in various regions has been provided in this section.

The report renders a detailed outline/blueprint of the generic injectables market globally that is expected to assist new companies establish their presence and market players expand their share in the market. The report concludes with the company profile section, which includes company overview, financial overview, SWOT analysis, product portfolio, business strategies, and recent developments.

The global generic injectables market has been segmented into: