Footwear is considered as the one of the prominent fashion accessories especially amongst youngsters and millennial. Not only this, the increasing demand for trendy, yet comfortable footwear among all age groups a key factor driving the global footwear market. With increasing participation in sporting activities and changing lifestyle, there is a massive demand for athletic footwear among non-sportspersons as well. Major brands are likely to focus on innovation of new footwear designs and research & development activities to strengthen their foothold in the global footwear market. Companies are undertaking mergers and acquisitions, and joint ventures with local players to expand their product portfolio 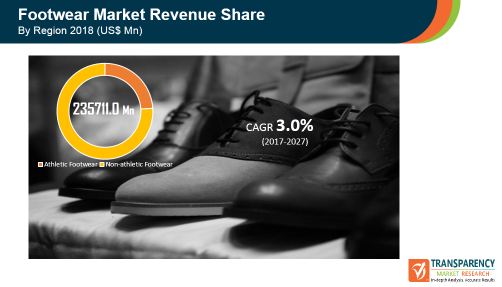 Request a sample to get extensive insights into the Footwear Market

Asia Pacific region anticipated to surge in the forecasted timeline

In terms of geography, the footwear market is divided in this report into North America, Europe, Asia Pacific, Latin America, and the Middle East and Africa. North America holds a major market of footwear in terms of value in the year 2018. The market of Asia Pacific is projected to expand at a significant growth rate in the forecasted timeline. As there is rise in sale of footwear on company-owned websites and various e-commerce websites in countries like China, India, Japan and other South-East Asian countries etc.

Stuck in a neck-to-neck competition with other brands? Request a custom report on Footwear Market

Prominent companies operating in the global footwear market are

The design and construction of footwear is constantly evolving in order to maximize its role of providing protection for the external environment. Now footwear are considered more as a fashion purpose. The market has witnessed several trends shaping its contours. Growing steam of athletic footwear among non-athletes is a case in point. Manufacturers and retailers are trying to appeal to consumers by exploring the potential of e-commerce channels where low-price points are easy to maintain and promote. Moreover, retailers online can modify and align their product portfolio faster than offline stores. Changing fashion trends has stimulated the demand for footwear made of sustainable raw materials. The companies are making heavy investments on research & development activities to introduce new designs and shapes of footwear to expand their product portfolio and increase their sale of products in the near future.

The research study on footwear market report highlights the SWOT analysis which includes the strengths, weakness, opportunity, and threats pertaining to the market. Porter’s Five Force Analysis in the report highlights threat of new entrants, bargaining power of suppliers, bargaining power of buyers, threat of substitutes, and competitive rivalry. This analysis helps in understanding a particular company’s position in a particular industry as well as market entry strategies for new players. The report also includes a value chain describing raw material suppliers, footwear manufacturers, key distributors, and end-users in the market. Meanwhile, manufacturers for footwear for sports are aiming at developing products that merge comfort, aesthetics, and functionality, especially those targeted for women consumers. Furthermore, materials that are versatile show rapid uptake among small- and mid-sized manufacturers in the footwear market. The global footwear market has benefitted from the growing trend of engaging in sports activities among kids and adults in developing nations.

The proliferation of retail outlets by brands in urban spaces of emerging economies has helped them tap new streams of revenues. Brands have been also been realigning their strategies such as investing sizably on online commerce channels. Companies are also focusing on selling their products on various e-commerce websites and company-owned websites to expand their product portfolio and revenue in the forecast period.

The report also highlights the footwear market by region and provides the market outlook for 2019–2027. The study analyses the drivers that influence the regional footwear market. The main regions assessed in this report include North America, Europe, Asia Pacific (APAC), Middle East & Africa (MEA) and Latin America. The report evaluates the present scenario and growth prospects of the footwear market for 2019–2027. Rapid uptake of latest fads and fashion trends on accessories has spurred demands for various styles of footwear. Moreover, the huge strides that e-commerce has made has given the regional populations, especially in emerging economies, to benefit from the low pricing points of their favorite footwear brands.