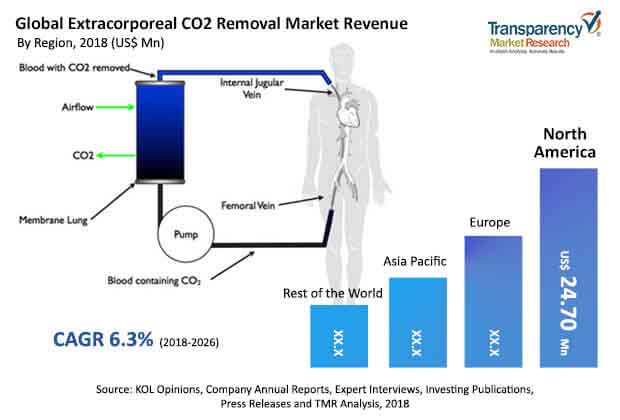 Based on end-user, the global extracorporeal CO2 removal market has been segmented into hospitals, surgical centers, and others. The hospitals segment accounted for a major share of the global extracorporeal CO2 removal market in 2017, followed by the surgical centers. Increase in the number of multinational hospitals with advanced laboratory infrastructure is anticipated to propel the hospitals segment during the forecast period.

Geographically, the extracorporeal CO2 removal market has been categorized into four regions: North America, Europe, Asia Pacific, and Rest of the World. North America accounted for the leading share of the global extracorporeal co2 removal market in 2017, followed by Europe. Availability of ECCO2R devices and increase in demand for them have boosted the growth of the market in North America. Asia Pacific is a highly attractive market for ECCO2R devices and is expected to expand at a significant CAGR during the forecast period due to presence of a large patient base in the region, especially in China and India, undergoing chronic obstructive pulmonary disease (COPD), and acute respiratory distress syndrome (ARDS).

The global extracorporeal CO2 removal market is consolidated with a few companies accounting for a majority of market share. Prominent players operating in the global extracorporeal CO2 removal market include Alung Technologies, Inc., Xenios AG, ESTOR S.P.A, Medtronic Plc., Medica S.P.A., and Getinge Group. These companies exhibit the largest geographical outreach with presence in ECCO2R devices. Demand for technologically advanced ECCO2R devices, along with continuous innovation, is likely to intensify the competition among the top players. Manufacturers are adopting the strategy of acquisition and collaboration to sustain in the market, which are anticipated to lead to high competitive rivalry among them.

ECCO2R gadgets are siphon reassure with warmer and separating transformer, offering access to both the arteries and the veins. In any case, trial method as opposed to an acknowledged remedial methodology controls the development of the extracorporeal co2 removal market. Expansion in government consumption on medical services in created nations is projected to augment growth the extracorporeal co2 removal market in the coming years.

Key factors expected to boost the growth of the global extracorporeal carbon dioxide removal market include the increasing geriatric population and their rising inclination towards various acute and chronic diseases. Additionally, the increasing cases of pulmonary obstructive disease are expected to aid in expansion of the global market as well. On the contrary, the risk of infection, hypoxemia, or thrombosis caused due to the restricted flow of blood through the circuit may cause severe health emergencies, thereby challenging the growth of the market in the long run.

Nevertheless, , the advent of latest and the most advanced therapeutic devices and equipment used for vitalizing the flow of blood, or efficiency in gaseous exchange inside the body, or rapid lung support will further create lucrative growth opportunities for the market in the coming years.

Each of the market segments have been extensively analyzed based on market-related factors such as rising adoption of minimally invasive ventilation devices. Moreover, historical year-on-year growth has been taken into consideration while estimating the market size. The market size and forecast in terms of US$ Mn for each segment have been provided for the period from 2016 to 2026. The report also provides the compound annual growth rate (CAGR %) for each market segment for the forecast period from 2018 to 2026, considering 2016 as the base year.

The overview section of the report explores the market dynamics such as drivers, restraints, and opportunities that currently have a strong impact on the extracorporeal CO2 removal market and influence it in the near future. Market attractiveness analysis has been provided in the overview section to explain the intensity of competition across different regions. The competitive scenario among various market players is evaluated through market share analysis in the competitive landscape section of the report. All these factors would help market players to take strategic decisions to strengthen their positions and increase share in the global extracorporeal CO2 removal market.

Based on region, the global extracorporeal CO2 removal market has been segmented into four major regions: North America, Europe, Asia Pacific, and Rest of the World. The market size and forecast for each of these regions has been provided for the period between 2016 and 2026, along with their respective CAGRs for the forecast period from 2018 to 2026, considering 2017 as the base year. The report also provides market size and forecast for major countries in their respective regions. A detailed qualitative analysis of factors responsible for driving and restraining the market and future opportunities have been provided in the market overview section. This section of the report also provides market attractiveness analysis, Porter’s five forces analysis, and market share analysis of key players, thus presenting a thorough analysis of the overall competitive scenario in the global extracorporeal CO2 removal market.

The global extracorporeal CO2 removal market is segmented as follows: