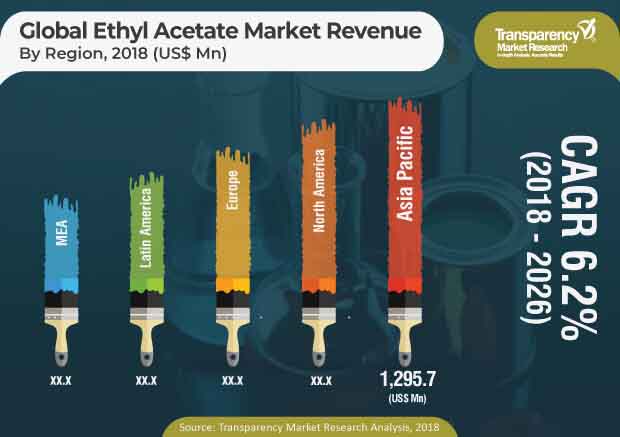 Ethyl acetate is an extensively used solvent in all types of coatings, paints, and varnishes, which are employed in building & construction and automotive industries. The global construction industry is expanding at a significant pace. According to Oxford Economics, the construction industry is anticipated to expand at an average annual growth rate of 3.9% by 2030. This is anticipated to fuel the demand for paints and coatings, which in turn, is projected to drive the demand for ethyl acetate in the next few years. Additionally, rapid urbanization in developing countries such as China and India is expected to drive the automotive industry in these countries in the next few years. This, in turn, is expected to boost the ethyl acetate market in China and India during the forecast period. Thus, increase in the requirement for paints and coatings from construction and automotive industries is expected to propel the demand for ethyl acetate in the next few years.

Demand for Ethyl Acetate to Increase from Paints & Coatings Industry

Demand for ethyl acetate has increased significantly for the manufacture of paints, coatings, and varnishes. Ethyl acetate offers superior performance and is an economical solvent. Furthermore, it has properties such as low toxicity and odor. This makes ethyl acetate a preferred solvent in coatings, paints, and varnishes that are extensively employed in building & construction and automotive industries. The global construction industry is expanding at a significant pace. This, in turn, is projected to drive the demand for ethyl acetate in the next few years.

In terms of volume, Asia Pacific and North America are leading regions of the global ethyl acetate market. In terms of value, the market in Asia Pacific is projected to expand at a substantial pace during the forecast period. The market in Middle East & Africa is estimated to expand considerably during the forecast period owing to the rise in the industrialization and increase in demand for these solvents for making printing inks varnishes and protective coatings for applications in industries such as building & construction and automotive in the region. The market in India, ASEAN, Japan, and China is anticipated to expand at a substantial pace in the next few years due to the increase in demand for ethyl acetate in various applications such as printing inks, food & beverage, cosmetics, and pharmaceuticals.

The report comprises detailed value chain analysis, which provides a comprehensive view of the global ethyl acetate market. Porter’s Five Forces model has also been included to help understand the competitive landscape of the market. The study encompasses market attractiveness analysis, wherein various applications of ethyl acetate have been benchmarked based on their market size, growth rate, and general attractiveness.

The report provides size (in terms of value and volume) of the ethyl acetate market for the base year 2017 and the forecast between 2018 and 2026. Market numbers have been estimated based on application of ethyl acetate. Market size and forecast for each application segment have been provided for the global and regional markets.