Application of Endosurgery Devices in Laparoscopic Surgeries to Rise

Technological advancements have played an imperative role in transforming the modern day healthcare industry. Over the past decade, minimally invasive surgeries, also known as laparoscopy, have garnered significance, as they require smaller incisions. With additional efforts toward minimizing the size of surgical incisions, minimally invasive procedures are set to gain traction in the near future. The advent of robotic technology, significant developments in endomechanical devices, and adoption of cutting-edge optical camera and imaging technologies are projected to accelerate the growth of the endosurgery devices market during the forecast period (2019-2027).

Minimally invasive procedures are associated with shorter hospital stays and significantly low degree of discomfort compared to conventional surgical techniques. However, despite these advantages, alternative treatments such as technologically advanced endoscopic surgeries, which include natural orifice transluminal endoscopic surgery (NOTES), endoscopic sub mucosal dissection (ESD), and suturing that require training and a high level of expertise could slow down the growth of the endosurgery devices market.

Participants within the endosurgery devices sphere are investing resources on the development of robotic systems with improved flexibility. For instance, the Flex Robotic System manufactured by Medrobotics was specially developed to perform neck and head surgeries. It was given the U.S. FDA approval in 2017. The adoption of these devices is expected to gain steady momentum in the coming years, as these devices continue to simplify the complexities involved with conventional procedures.

Sensing the growing demand for advanced endosurgery devices, stakeholders in the current endosurgery devices market landscape are leaning toward the development of new, cutting-edge endosurgery devices and are simultaneously pushing to gain approval from the FDA. For instance, in September 2019, Apollo Endosurgery was given the FDA clearance for the newly developed suture anchor device specifically designed to work in conjunction with OverStitch endoscopic suturing systems. The company revealed that obtaining the clearance from the FDA would enable it to improve the overall distribution of their suture-anchor systems and gross margins. Moreover, with better control over their supply chain, the company aims to expand its footprint in the global endosurgery devices market.

In September 2019, Ethicon launched the first powered circular stapler to address the complications related to gastric, thoracic, and colorectal surgery. The newly developed endosurgery device, ECHELON CIRCULAR Powered Stapler is a combination of two novel technologies of the company –3D Stapling Technology and Gripping Surface Technology (GST). Companies operating in the healthcare technology sphere are expected to focus on the development of cutting-edge devices that offer high degree of precision, accuracy, and end results. 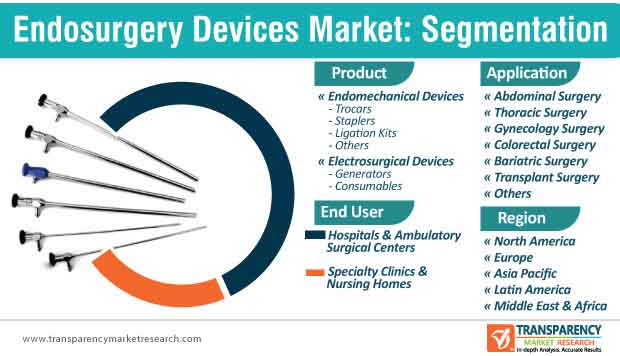 The endosurgery devices market is expected to grow at a CAGR of ~4% during the forecast period and attain a market value of ~US$ 13 Bn by 2027. The onset of state-of-the-art technologies, developments in robotic surgical systems, and integration of advanced imaging technologies will continue to bolster the growth of the market for endosurgery devices in the near future. Companies should engage in the development of new products with improved capabilities and functionalities. The adoption of these devices for abdominal, thoracic, bariatric, and gynecology surgeries, among others, will continue to grow during the forecast period, particularly in developed regions, including North America and Europe.

The report includes an elaborate executive summary, along with a snapshot of the growth behavior of various segments included in the scope of the study. Moreover, the report sheds light on changing competitive dynamics in the global endosurgery devices market. These indices serve as valuable tools for existing market players as well as for entities interested in entering the global endosurgery devices market.

A unique research methodology has been utilized by TMR to conduct a comprehensive research on the growth of the global endosurgery devices market, and arrive at conclusions on the future growth prospects of the market. This research methodology is a combination of primary and secondary research, which helps analysts warrant the accuracy and reliability of the drawn conclusions.