The World Health Organization revealed that, in 2018, nearly 1.35 million people lost their lives across the world due to road accidents. Further, the WHO also stated that, road injuries are the leading cause of deaths among individuals between 5-29 years of age. Drowsiness, fatigue, and drunk driving are some of the leading causes of road accidents, worldwide. The growing number of road deaths has compelled automakers to integrate cutting-edge technology to enhance the safety of their vehicles. Driver alert systems have emerged as one of the most effective solutions to prevent road accidents in recent times. 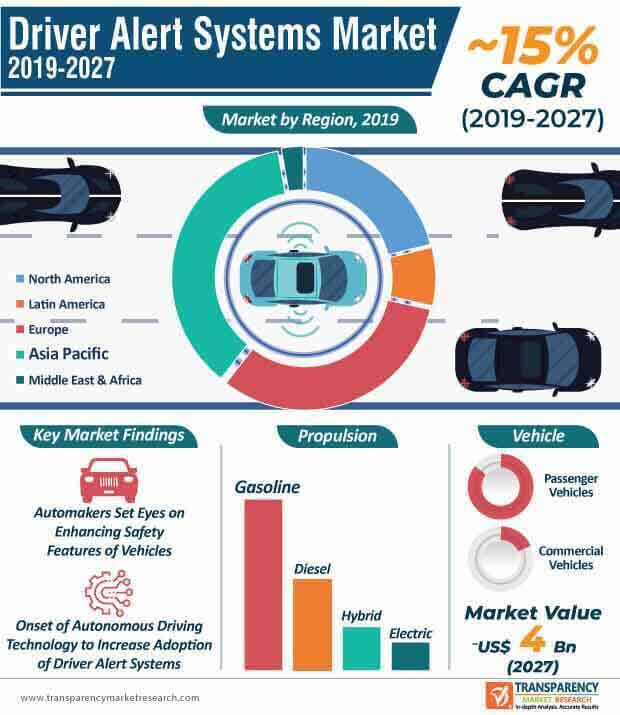 In the past decade, road accidents due to driver fatigue have increased at a steady pace. Sensor technology has progressed at a rapid pace in recent years, and at present, sensors are widely deployed across driver alert systems, worldwide. These sensors accurately measure the driver’s blinking patterns and hand position on the steering to gauge whether the driver is fatigued or not. Further, in recent years, companies operating in the driver alert systems market are focusing on developing a system that will provide real-time insights related to the blinking patterns of drivers. These sensors are developed to detect longer eye blinks and alert the driver in advance with the help of a vibrator, to prevent any accident.

The adoption of these sensors to enhance the accuracy of modern driver alert systems is growing, as prominent car makers in the driver alert systems market, including Ford, Toyota, Volkswagen, and Volvo, among others, continue to focus on improving the safety features of their vehicles. Fueled by advancements in technology and the advent of cost-effective sensors, the adoption of sensors is expected to witness 3X growth over the forecast period (2019-2027). Despite the soaring adoption of sensors in the manufacturing of modern automobiles, participants operating in the driver alert systems market are increasingly exploring the idea of using cameras to improve the accuracy of their driver alert systems. The growing inclination toward cameras is reflected in the projected growth of the cameras segment, which is expected to witness an impressive CAGR growth of ~17% over the assessment period.

In recent years, automakers have recognized the growing need to improve the functional parameters of their driver alert systems. Prominent players in the global driver alert systems market are showing promising signs of providing advanced safety features using advancements in sensor technology and cameras. For instance, the PRE-SAFE ® system developed by Mercedes predicts a collision using a series of sensors. Further, the Attention Assist feature tracks the driver’s interaction with various controls of the vehicle and alerts the driver if drowsiness or fatigue is detected. The Emergency Assist feature introduced by Skoda sends out a warning signal if unusual driver activity or no steering wheel movement is detected. Similarly, Volkswagen, Ford, Volvo, and other car makers are increasingly investing in technology to prevent road accidents. 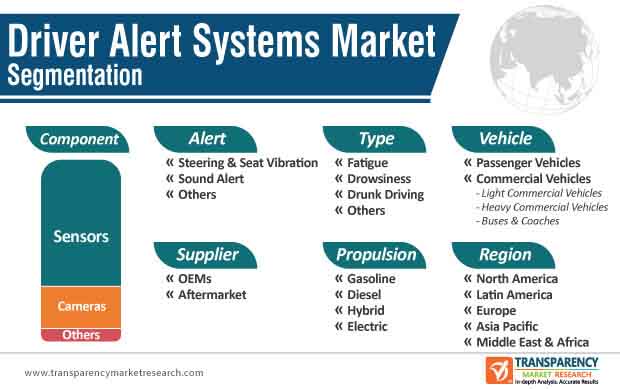 Stuck in a neck-to-neck competition with other brands? Request a custom report on Driver Alert Systems Market

The advent of semi-autonomous and autonomous vehicles will present a plethora of opportunities for participants in the global driver alert systems market over the forecast period. Considering the exponential rise in the number of road accidents caused due to fatigue and drowsiness, worldwide, manufacturers should focus on improving the accuracy of their driver alert systems by using high-quality, efficient, and cost-effective components, including sensors and cameras. Moreover, with self-driving cars on the horizon, the adoption of advanced driver alert systems is likely to witness substantial growth in the near future.

Transparency Market Research’s recent report on the driver alert systems market, with the help of a comprehensive outlook, provides readers with an assessment of the global market landscape. This study on the driver alert systems market analyzes the scenario for the period of 2019 to 2027, wherein, 2018 is the base year. This report enables readers to make important decisions with regard to their business, with the help of a wealth of information enclosed in the study.

This TMR study on the driver alert systems market also provides data on the developments made by important players and stakeholders in the market, along with a competitive analysis. The report also provides an understanding of the strengths, weaknesses, threats, and opportunities, along with trends and restraints in the landscape. Presented in a clear sanctioned manner, this report on the driver alert systems market offers reader an individual understanding of the market.

This study also discusses the underlying trends and impact of various factors driving the driver alert systems market, along with their influence on the evolution of the market.

This report answers these questions and more about the driver alert systems market, aiding major stakeholders and key players in making the right decisions and strategizing for the advancement of their business.

This report uses an analytical triangulation method to estimate the numbers and figures of the driver alert systems market, with both, a bottom-up and top-down approach.

This report on the driver alert systems market provides information on the basis of component, type, propulsion, alert, vehicle, supplier, and region.