The demand within the global bowel management system is rising on account of the increasing incidence of diseases and disorders that cripple individuals. Several people fall victim to diseases that hamper movement or even render patients completely bed-ridden. The function of the bowel is adversely affected in such patients, opening new opportunities for growth within the global bowel management systems market. There is increasing demand for leading-edge technologies that can offer greater utility to patients and medical practitioners. The healthcare industry willingly invests in such technologies to improve patient care delivery. Bowel management system is one such technology that has attracted the attention of the medical fraternity.

The bowel management system can be defined as a device that enables the diversion of stool, which might be watery or semi-solid, and provides containment. It is employed in patients with fecal incontinence, constipation, in patients who have undergone spinal cord surgeries, and other neurological disorders. In children, these devices are primarily utilized in patients with spina bifida and anorectal disorders.

The global bowel management systems market was valued at US$ 1,682.95 Mn in 2017 and is anticipated to reach US$ 2,359.86 Mn by 2026, expanding at a CAGR of about 3.7% from 2018 to 2026. Expansion of the market can be attributed to the rising geriatric population in whom fecal incontinence and constipation is a common issue, rising prevalence of fecal incontinence, increase in the number of spinal cord surgeries performed annually, rise in awareness among people related to the advantages of bowel management systems, and the decline in skin infections owing to the use of these devices are driving the market. Furthermore, increasing longevity among the population, owing to the decline in the mortality rate, leading to the changing population demographics also fuels the market. However, demand from patients for non-invasive mode of treatment of bowel problems, which is considered as a conservative mode of treatment, the social stigma associated with the usage of these devices, and the contraindications on the use of these devices are likely to hamper the market. 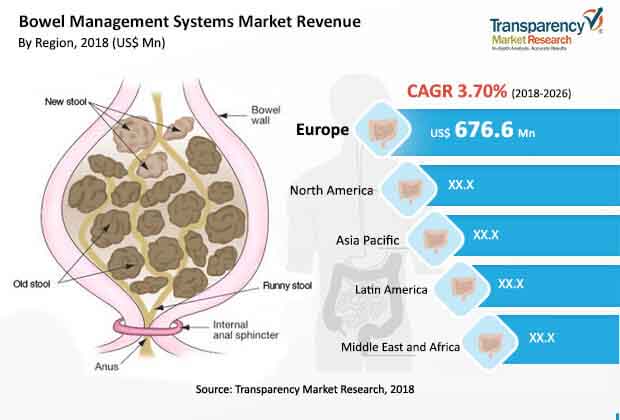 In terms of product, the market has been segmented into systems and accessories. The systems segment has been further sub-segmented into irrigation systems, sacral neuromodulation systems, and others. The accessories segment has been further split into plugs, catheters, implants, anal sphincters, stool bags, and others. The systems segment is anticipated to expand at a significant growth rate during the forecast period, owing to the rise in demand for irrigation systems. Furthermore, these systems are designed for single-use, and are provided with catheters, bags and other related accessories. Rise in demand for irrigation systems can be attributed to their minimally invasive mode of treatment, the advantages of the use of these devices such as infection control, prevention of skin breakdown, odor prevention, and fast recovery. Usage of these devices enables patients to enhance the quality of their lives, lower the cost of daily management, and reduce nursing time.

In terms of end-user, the market has been classified into hospitals, ambulatory surgical centers, and home-care settings. The hospitals segment dominated the market in 2017; however, the home-care settings segment is expected to propel at a high CAGR during the forecast period and dominate the market in the near future. Expansion of the segment can be attributed to the cost effectiveness of treatment at home and the rise in demand from the patients for bowel management at home in order to avoid social stigma.

In terms of region, the market has been segmented into North America, Europe, Asia Pacific, Latin America, and Middle East & Africa. North America and Europe, cumulatively, accounted for more than 76% of the global market and are anticipated to remain dominant, in terms of revenue, in the near future. This can be attributed to the enhanced healthcare facilities available in these regions. In Europe, certain products, such as Axonics’ rechargeable Sacral Neuromodulation System (r-SNS), are approved for the treatment of fecal incontinence, which fuel the market. This product is still in the clinical trial stages in the U.S. The market in Asia Pacific is anticipated to expand at a robust pace during the forecast period. Expansion of the market in the region is expected to be contributed by the rising geriatric population in India and Japan.

The global bowel management systems market report comprises an elaborate executive summary, which includes a snapshot that provides information about various segments of the market. It also provides information and data analysis of the global market with respect to the segments based on product, patient type, end-user, and region. A detailed qualitative analysis of drivers and restraints of the market and opportunities has been provided in the overview section. Additionally, the section comprises competitive matrix and company profiles along with business overview to understand the competitive landscape in the market. This section of the report also provides market attractiveness analysis by geography and market share analysis by key players, thereby presenting a thorough analysis of the overall competitive scenario in the global bowel management systems market.

Based on end-user, the global bowel management systems market has been classified into hospitals, ambulatory surgical centers, and home-care settings. The home-care settings segment is anticipated to expand at a significant CAGR during the forecast period. The market has been analyzed based on price variations, technology trend, and presence of key players. The market size and forecast for each of these segments have been provided for the period from 2016 to 2026, along with their respective CAGRs for the forecast period from 2018 to 2026, considering 2017 as the base year.

Geographically, the global bowel management systems market has been segmented into five major regions: North America (the U.S. and Canada), Europe (the U.K., Germany, France, Spain, Italy, and Rest of Europe), Asia Pacific (China, India, Japan, Australia, and Rest of Asia Pacific), Latin America (Brazil, Mexico, and Rest of Latin America), and Middle East & Africa (South Africa, GCC countries, Israel, and Rest of Middle East & Africa). The market size and forecast for each of these regions and the mentioned countries have been provided for the period from 2016 to 2026, along with their respective CAGRs for the forecast period from 2018 to 2026, considering 2017 as the base year. The research study also covers the competitive scenario in these regions.

The global bowel management systems market has been segmented as follows: